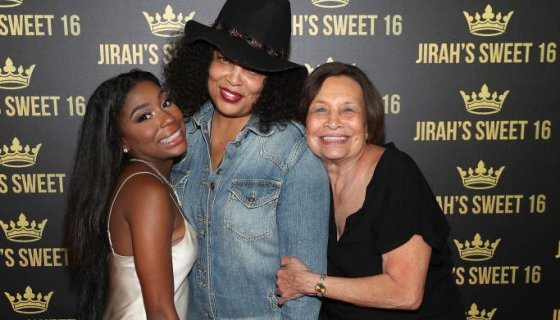 has been publicly mourning the death of his ex-girlfriend and mother of three of his children, , along with also recently losing his uncle as well. According to those close to the late Harris, she was reportedly working on a new tell-all book that detailed physical abuse she allegedly suffered at the hands of Mayweather.

The Sun shared portions of a draft of a book in progress from Harris by was of one of her close friends in where she shared shocking details of what she framed as the “last beat down” from the celebrated boxer.

The alleged incident was witnessed by the former couple’s three sons and was sparked by Mayweather believing Harris was seeing another man and giving him money.  One of Mayweather’s sons reportedly went to get help and it was said by Harris that Mayweather drove off after security was alerted.

We will share a portion of what Harris wrote of this alleged incident but must warn that the details could be disturbing to some.

“He was determined to teach me a lesson. I could see it in his eyes. But, I knew I couldn’t lay down, so I fought back.”

Josie describes how she tried to fight back – but stood no chance against the strength of the legendary boxer – and screamed for help as he continued to punch her.

“I knew the power that Floyd Mayweather had in those hands and I was afraid now,” she wrote.

As The Sun notes in their piece, Harris lived in fear of Mayweather and told USA Today that she once needed to take Xanax ahead of seeing him as he visited his children.  Mayweather denied the claims of the beating despite his now-adult son confirming his mother’s story. He claimed in a later interview that their exchange was due to Mayweather attempting to restrain Harris after a bad episode with drugs.

Mayweather served two months in jail for domestic abuse and has continually denied the claims. Harris also filed a $20 million lawsuit against her ex-boyfriend after he suggested she was hooked on drugs. Harris was found dead at the wheel of her on March 9 in California, but a cause of death has yet to be released but investigators do not suspect foul play.