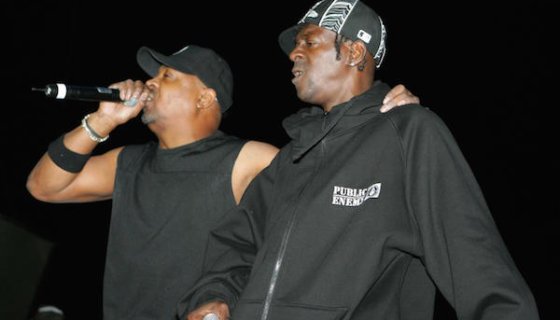 Even though does not have the cleanest track record it seems his partner in rhyme is the one doing shady business. The world’s greatest hype man has something to say about recent explanation.

As spotted on Vibe the long island lyricist recently made an appearance on People’s Party with Talib Kweli podcast. While the Blackstar MC put respect on Flav’s resume he did ask what the split was about. The Rhyme Animal admitted that his firing was a calculated publicity stunt.

“I’m not saying it’s a hoax,” he explained. “I’m saying that the original intention is to get your attention.” He said that was inspired by Orson Welles’ “The War of the Worlds” which created a panic in 1938 a radio broadcast that was all cap. He also released a formal statement detailing the move.

“Hearing the confused mush of political talk while under the bowels of Trumpotus made me use a presidential stage as my platform. Out of this storm came a plan between Flav and me to remind people that what’s important should have as much, if not more, value than just what’s popular. Thus came the HOAX, our ‘War Of The Worlds.’ Believe half of what you hear and NONE of what you see.”

While Chuck’s explanation sounds thought out Flav isn’t having it. He took to Twitter to vent his frustration. “I am not part of your hoax, @mrchuckd…there are more serious things in the world right now than April Fool’s jokes and dropping records…the world needs better than this…you say we are leaders so act like one,” he wrote. He also included a link to where his fans can donate to a COVID-19 relief fund.

I am not a part of your hoax .@mrchuckd,,,there are more serious things in the world right now than April Fool’s jokes and dropping records,,,the world needs better than this,,,you say we are leaders so act like one,,,donate to those in need here: https://t.co/7hioasSwuV

This back and forth all stems from Chuck and his new group Public Enemy Radio performing at a benefit show for Bernie Sanders. Flav claimed that the move was shady and was in turn “relived” of his duties from the group. You can hear the original interview with Talib below.