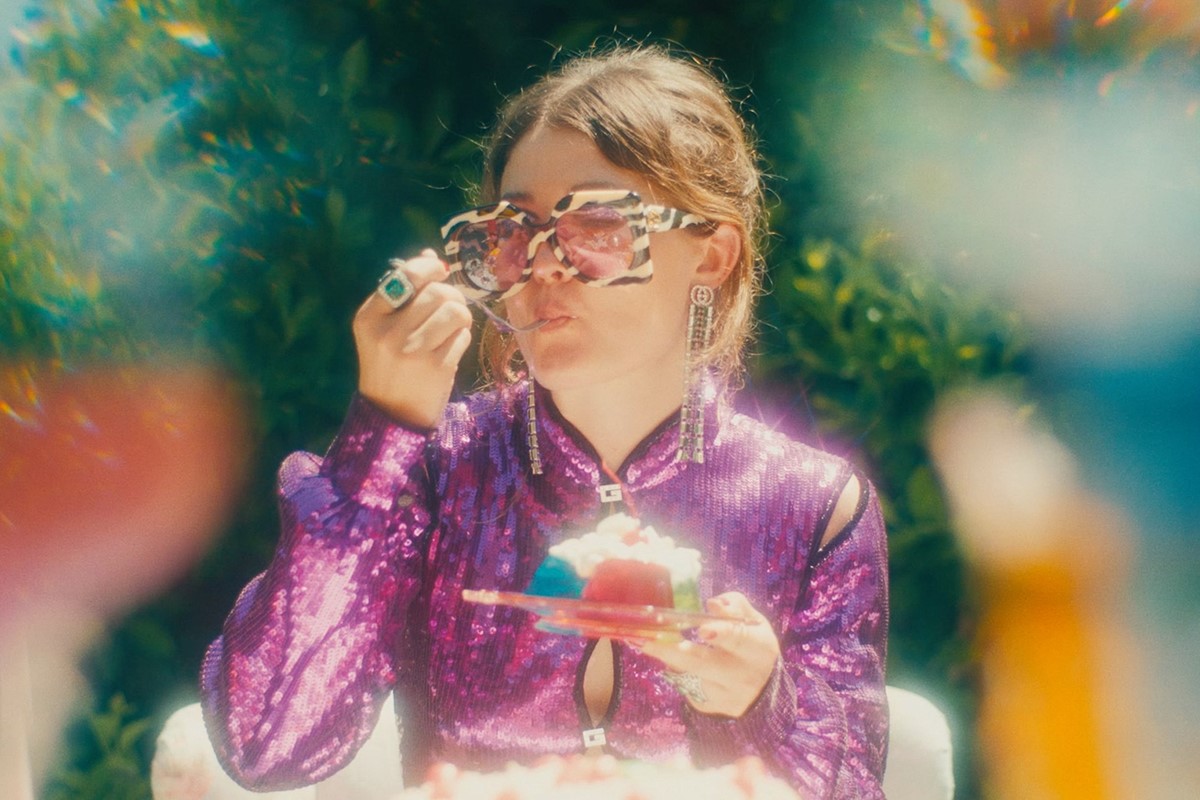 Dazed and Gucci introduce Absolute Beginners, a short film series which will see nine creative talent do something they’ve never done before: get in the director’s seat. The first five films – all featuring the Jackie 1961 bag – debut today, with directors Elle Fanning, Kelvin Harrison Jr., Jodie Turner-Smith, Emma Corrin and Benedetta Porcaroli all given a blank slate to create their first-ever short films. From a technicolour tea party to a Western-inspired showdown, read the directors discuss their creative process and inspirations below and watch their works here.

“My film is about the captivating nature of Gucci, specifically the Jackie 1961 bag. Even a dog can be hypnotised by its beauty. One night while drifting off to sleep, I thought of this western showdown between a dog and dog owner with a scoreboard keeping tallies of how GUCCI ALWAYS WINS.

Growing up on film sets, watching directors I wholeheartedly admire has been the greatest classroom. The best directors are the first to confide in the people they choose to work with. Also, not being afraid to get your hands dirty. I have a very ‘anything for the shot’ mentality!

A big take away from directors I have worked with is, HIRE YOUR FRIENDS! So I asked people close to me if they would be up for putting their acting caps on. That gorgeous teen in the tree is my cousin! The hilarious part is that on my first project I broke the sacred rule, don’t work with dogs or children! Well, I worked with BOTH! Surprisingly, the dog was not a ‘movie dog’ at all, but just an incredibly trained pet. A turkey slice was rigged to the purse so she would jump. Movie magic!”

“The entire idea of the film began with the Gucci Jackie 1961 bag – who is the woman who wears this bag, who is Jackie? What we wear is the costume we put on to show the world. And I just imagined this story based on this woman who uses costume as her escape.

Jackie is about a woman who is alone, but not lonely. In her home, her sanctuary, she chooses to remain uninterrupted, despite the pressures of outside voices. It is a film about escapism. In a world that doesn’t allow her to be carefree, she chooses it – thus, her solitude and the care she takes to get dressed and make herself up are, in some ways, acts of defiance.

I truly loved working as a director. It was so empowering to see the idea come to fruition, from my amateur treatment pasted together in Pages, to this gorgeous five and a half minute dream in 16mm. I learnt a LOT. To have my hand in everything – choose every shot, every look, approve every piece of set decoration, to be in the edit, to sit for hours and direct the colour grade, every aspect of this was an incredible moment of growth and learning and evolution for me as an artist.”

“The concept came from someone I was seeing who told me that the risk of falling in love was greater than the reward. I think most people choose to believe we just fall in love when in actuality we grow into love. We control how much we choose to invest when building an emotional connection with another person. In the film, we see our protagonist literally put his beautifully packaged ‘baggage’ out there hoping someone would take it, as our female lead does. But when confronted with this willing and able partner, the film questions whether (he is) truly ready and able to receive it… Who knows… but I wanted to explore those questions and allow the film to take us on that chase.

The track used in the film is performed by my middle school music teacher and family friend, Kidd Jordan. He’s one of the greatest musicians to come out of New Orleans and growing up his style always startled me. Kidd’s melody is the narrative. It’s a summoning for unity. It asks questions as it cries out for understanding and I don’t think the film would work without it. Also, my dad is a saxophonist and I thought it would be funny to do my best impression of him when he’s really feeling himself… I’m so proud of what we were able to accomplish.”

BENEDETTA PORCAROLI – MEET ME THERE

“The location is an old abandoned temple located in a Roman villa. I love the dreamlike vibe of this place which represents the human soul and its contradictions. The concept of the film is that everyone has the chance, through an object – the bag in this case – to turn into something better. The clothes are the protagonists of the changing narrative; they are the means we use to show our personalities.

I loved being on the other side of the camera. I’m fascinated by the study of light and perspectives. Working on set I learnt to look at all the people around me – I tried to replicate what I’ve seen in my experiences on set. Being an actor and being a director are two jobs that work in a symbiotic way. As an actor you don’t have the perception of time and of what you are doing, in this case I had fun getting to be aware of that.”

Click here to watch Meet Me There, directed by Benedetta Porcaroli

“I loved the idea of trying to make a five-minute western, using all the recognisable tropes of the genre but then filming it in the UK and placing at its centre a mother-daughter relationship.

I was keen to explore the unique dynamic between a mother and her adult daughter – I think it’s a real phenomenon, the shift that this relationship undergoes when the daughter grows up and comes to see her mother as a human being, someone who is going through and continues to go through the same kind of hardships that she is experiencing, that her mother has weaknesses and vulnerability just as she does.

The dialogue that I wrote is meant to almost exist as their own language, hidden meanings and innuendo that only makes sense in the context of their relationship. In this way you’re meant to have the sense that they could either kill each other in that moment or walk off into the distance reunited.”