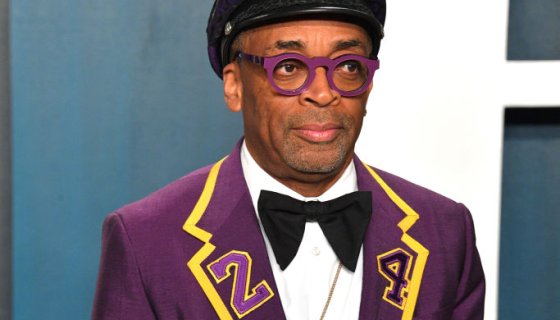 The unfortunate and is still resonating throughout the world. At last night’s Oscars, , who was a presenter, paid homage to the late NBA legend with his outfit.

The Do The Right Thing-director, and Oscar winner, was rocking a purple suit with gold trim, the Los Angeles Lakers’ team colors, on the red carpet (and to Vanity Fair‘s Oscar party). The lapels had the numbers 2 and 4, a nod to the #24 the Black Mamba rocked for the latter part of his career after switching from #8.

Oh, and the suit itself was Gucci. As for the kicks, Spike rocked a pair of orange Nike Kobe 9 Elite “Strategy” basketball sneakers.

“Tribute, honor, homage,” Lee told the Hollywood Reporter of his suit, which also had “24” embroidered on the back just below his neck. “We all miss him. I’m presenting tonight but at the same … I wanted to represent. I want to do both tonight.”

Spike Lee cooked up a documentary about Bryant called Kobe: Doin’ Work, which premiered on ESPN in 2009. The film followed a day in the life of Kobe, offering an inside look at his work ethic as well as his in-game strategy since he was mic’d uo for a game against the San Antonio Spurs.

In 2018, Bryant won an Oscar himself for his Dear Basketball short film, which earned him a statue for best animated short film.

As for Lee, who was l, check out pics of his fit below.