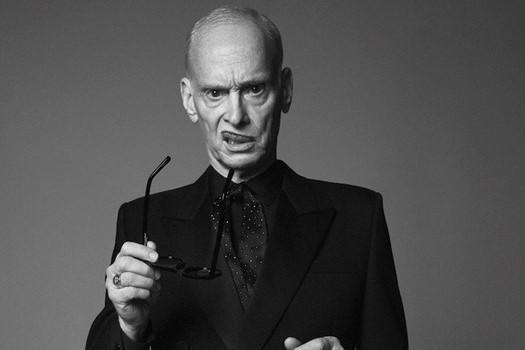 From Miuccia Prada to Rei Kawakubo, we look at the perverted legacy the so-called Pope of Trash has left on the runway

Every day, for the past 50 years, John Waters has drawn a pencil-like wisp of a moustache along the contours of his top lip, which, throughout the course of the day, tends to sweat itself into an increasingly spittled smear of kohl. What started out as an homage to the musician Little Richard has become an absurdist crux for Waters, who cannot go a few hours without reapplying his “magic little wand of sleaze” – a Maybelline brow pencil in Velvet Black. He’s tried other, more expensive products, of course, but they’re just “too thick, too penetrating, too indelible”.

As prim as it is perverted, Waters’ trademark slither is but a gateway into the cult director’s vulgar universe – one full of incest, dog shit, and anal prolapses (which could actually be the tagline for his 1972 film Pink Flamingos). “I know my mustache is creepy to some people,” he told the Baltimore Star in 2011, “but it’s creepy in a positive way”. The same can be said for almost all of Waters’ artistic endeavours – from 1974’s Female Trouble, to 1981’s Polyester, to 1990’s Cry-baby – all of which tow the line between filth and frivolity, crowning Waters as the so-called ‘Pope of Trash’ or ‘Prince of Puke’.

Pre-trigger warnings, Waters’ depraved filmmaking looked to both camp and crud as a way to poke at the edges of bad taste, bad behaviour, and shockingly bad hair. Be it Bab Johnson’s grotesque fishtail gown in Pink Flamingos or Dawn Davenport’s transparent wedding dress in Female Trouble, Waters creates looks so diabolical that the fashion world has had no choice but to rubberneck. As the provocateur turns 75 today, we look at Waters’ unlikely relationship with designers and the lurid legacy that he has left on the runway.