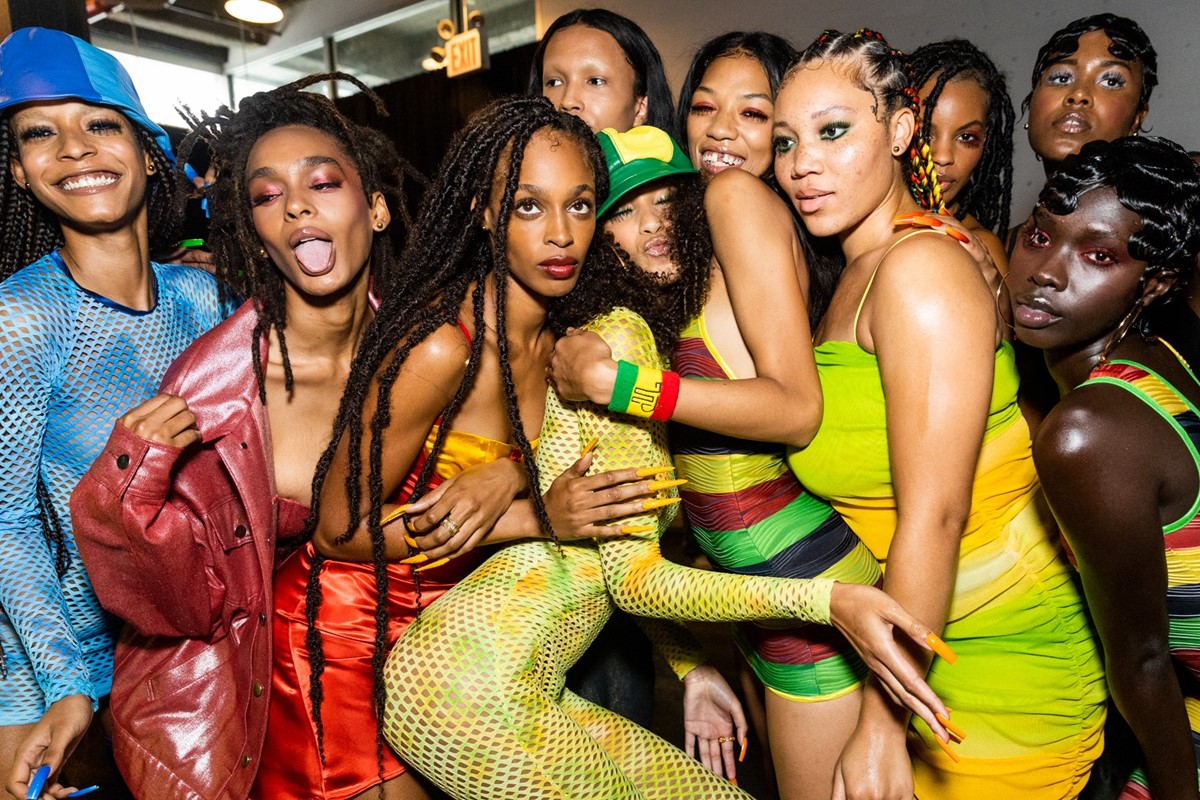 As we drive off into the metaphorical sunset, hopefully watching the nightmare that was COVID-19 reduce to a mere speck in our rearview mirror, we can slowly get back to the things that spark joy. For fashion lovers, that is of course fashion week. ICYMI, NYFW is back with a bang for the SS22 shows; with what feels like the first proper season with majority IRL events in a very long time.

Among city stalwarts like Proenza Schouler and Eckhaus Latta, there’s a genuinely exciting host of younger and newer names – from Willy Chavarria and Saint Sintra, to Peter Do – taking a step forward into the spotlight. And elsewhere in the mix is Dazed 100er and the brain behind Theophilio, Edvin Thompson.

The Jamaican-born designer has rightfully earned himself the title of one to watch, despite no formal design training, with his colourful, sexy, and Carnival-ready lewks – plenty of which have been worn by the likes of Solange, Gabrielle Union, and Luka Sabbat.

When we speak with Thompson, he’s in the midst of preparing for his latest collection, which, given his propensity for exploring his heritage, is perhaps unsurprisingly inspired by his birthplace – this time with a focus on the now-closed airline, Air Jamaica. “I always want to challenge myself, especially when I’m designing collections,” he says. “Every collection feels like a step up from the last one and you can visibly see the growth in the clothing.”

As part of the city’s new guard of diverse designers, Thompson is just as focused on the message of his collections as he is with making fabulous clothes that people want to wear. “So many of us are in survival mode, trying to find a way for ourselves,” he says, reminiscing on his years hustling at Red Lobster while trying to get his brand off the ground. “Being transparent and making our stories visible is so, so important.”

As Theophilio’s SS22 gets its debut, here, Thompson discusses the impact of the pandemic on young creatives, how New York inspires his label, and how the industry can authentically support Black designers.

Hey Edvin! How are you feeling about the show, and how do you feel in general about this stage of the process?

Edvin Thompson: I’m very ambitious creatively, so even if we get things done early, my subconscious will find a way to make changes. It might look perfect, but I would want to add or change something just because we have more time – I’m accustomed to working down to the show and amazing work has come out of that. I thrive under pressure, I think I’ve been trained to. There’s so much pressure in fashion, but it’s really important to find your way through it.

What can you tell us about the inspirations behind the collection?

Edvin Thompson: My inspiration can be the simplest thing like a TV show or song, or even a conversation I’ve had and it will feed into past ideas I’ve had. But for this collection, it’s Jamaica. I want to celebrate all the heroes and icons from Jamaica and think about their impact on the world. There’s Bob Marley, Spice, Marcus Garvey, Usain Bolt, Elaine Thompson – for such a small island, it’s paramount to think about and I think it’s important to constantly remind people where we’re from.

Celebrating your heritage is a big part of the Theophilo ethos, but how does being a New York designer inspire you?

Edvin Thompson: New York is like a great pair of leather pants or a leather jacket. It’s very edgy, ambitious, driven, and it requires so much tenacity to live here. New York has really helped me rise to the occasion and understand my brand. It’s so much bigger than me and the kids who look to the brand for inspiration and decide that’s what they want to do too is so important. If I can do it my own way, they can make it as well. To be able to inspire people to be their authentic selves no matter what they look like is where I want to go.

“Celebrating with my people and having the space to find joy in life is what motivates me to keep working – even during a pandemic. It flooded in New York recently and that was insane, but now it’s a beautiful sunny day, so life does go on and we have to find joy in that” – Edvin Thompson

How would you describe the current environment for the new school of young designers that are emerging from the city’s fashion scene?

Edvin Thompson: There’s a lot of camaraderie – a lot of my peers are also on the fashion schedule and it’s very joyous when we get on a Zoom meeting together. It’s very refreshing to say the least considering how the fashion industry has been in the past few years, cliquey and with gatekeepers. It’s really nice to see a bunch of amazingly talented Black and brown people champion each other in this space.

How do you think people’s relationships with clothing and fashion have changed over the pandemic?

Edvin Thompson: If we look at why we wear clothes, we use them to champion our personalities and the different parts of us, so I think people are excited to get back into that because we’ve been away from it for almost two years now. There hasn’t really been a fulfilling moment where you’re outside repeatedly in different looks – I definitely haven’t felt like that since I moved to New York.

Back then, I was interning in the Garment District and all these people in the area were killing it. I wanted to be like them and be sharp too. People like that inspired me to move to New York because I wanted to be around that kind of energy. This is the heart of culture.

What does your family think of the success you’ve had through celebrating your heritage?

Edvin Thompson: I sent my mum and dad the Jamaican Observer, Jamaica’s national newspaper and I was on the cover of the style section with a dress that I did for Gabrielle Union’s birthday. My mum was like: ‘Oh my god, this is my son!’. My brothers and sisters have always celebrated me, and my brother actually worked on my SS21 collection, as well as this season’s. My parents are still a way from understanding the gravity of things, but I think the newspaper was a nice inkling to see me in a different way and champion what I do.

As a newer designer finding success, how does it feel and what kind of advice would you give to graduates looking to make it in the industry?

Edvin Thompson: It’s been crazy, I remember when I was working at Red Lobster. It wasn’t somewhere I saw myself, but it was stability, and I would travel for two hours just to get to work. There was so much discomfort but that was my drive to get out of the job – it was a continual reminder that I had a goal.

I also think it’s really important to say no, it’s very powerful. As a business, there are lots of corporations and conglomerates that want to partner with me just because of the visibility aspect of it, but it should go deeper than that. It’s important to hone in on yourself and your individuality so you craft something that means something to you.

With all the talk last year around representation and diversity, how do you think the industry has changed for POC creatives?

Edvin Thompson: I don’t think anything has necessarily changed, but I do feel that because of the pandemic and how history will write itself 10 years in the future, that brands and corporations want to be on the right side of history. They want to say: ‘In 2021, we supported Black designers by posting a black square on Instagram’, but it goes a lot deeper than that. It definitely pays to put your money where your mouth is. Designers like Kerby Jean-Raymond are definitely doing it – he created an incubator for amazing young talent here in New York and I think a lot of the industry should take notes. It’s important to be very authentic in these spaces because that’s how real change is going to happen.

What is motivating you to keep designing and working in fashion?

Edvin Thompson: Celebrating with my people and having the space to find joy in life – even during a pandemic. It flooded in New York recently and that was insane, but now it’s a beautiful sunny day, so life does go on and we have to find joy in that.