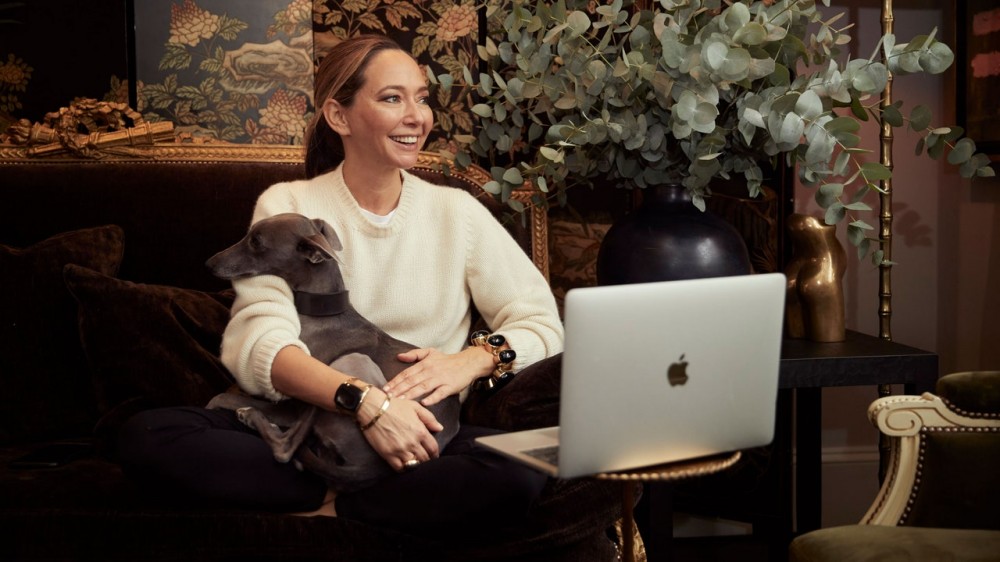 Whitney Bromberg Hawkings has said it all with flowers. The florist is adept at expression via blooms, so much so that clients like Dior, Louis Vuitton, and Farfetch count on her to create the dazzling floral-scapes at their events and shows. Through her service, FLOWERBX, which she founded in 2015, provides fresh cut flowers on-demand; Bromberg Hawkings' expertise goes beyond standard arrangements.

The fashion insider began her career as an assistant to Tom Ford during his tenure at Gucci and eventually became SVP of communications at his eponymous brand. After instantly connecting over their Texan roots and shared reference points, they spent two decades working side by side. During her time in high fashion Bromberg Hawkings became familiar with the industry’s flower culture, i.e., the endless stream of thank you bouquets and signature arrangements that pass between designers, editors, and public relations executives and their ilk. She quickly realized that way a floral choice can symbolize the sender. “I understood that the flowers Karl [Lagerfeld] would send were representative of Karl’s aesthetic,” says Bromberg Hawkings. “What Anna [Wintour] or Miuccia [Prada] sent didn’t look like it came from a florist, it was a beautiful and simple representation of their style signifiers.”

Sending blooms as a thank you was common, but the practice was unnecessarily complicated. With multiple flower shops competing for attention, the arrangements often said more about the florist than anything else “They want to put their stamp on things so when you ask for white peonies, you wind up getting excess greenery or whatever else they choose instead of what you’ve asked for,” she explains. “In New York, if I wanted to get flowers not a fancy arrangement, I would have to go to the flower market, which is fun if you have the time but when you’ve got two kids, and a meeting with Tom at 9 AM you don’t want to schlep there. I was buying everything else online—farm-fresh groceries, clothes, beauty—and wanted to create a brand where you could buy flowers in the same way.”

With her husband, Peter, serving as Ford’s SVP of menswear and her circle of friends and connections firmly rooted in the fashion industry, Bromberg Hawkings was uncertain about making the jump into a new field. Still, she found herself at crossroads as she approached a milestone birthday in 2015. “It was a now or never moment,” she shared on the phone from London. “I could have stayed and worked with Tom forever, we were like a little family [but] I had this idea that was a solution to a problem, and something I knew didn’t already exist. At the time, I was turning 40 and pregnant with my third child, so it was almost a culmination of all those things. I understood that if I didn’t do it, then it was never going to happen.”

Even before she went into the direct-to-consumer flower business, Bromberg Hawkings knew the importance of a decisive life choice. At 23, she packed her bags and headed to Paris with the hopes of emulating her idol Jacqueline Kennedy Onassis by living as an expat and landing a position at Vogue Paris. Life had other plans—she wound up working at Gucci instead—but the experience taught her to follow her instincts. “You can move the needle,” she explains. “It’s gratifying to take an idea and turn it into a reality, even when it’s something tiny. You think, ‘wow, I did this’ [and] with work one of the most exciting things is that when you have success, however small, it feels personal. The flip side is that every mistake is yours too, but the ups and downs are all necessary.”

After decking The Mark hotel’s halls in Christmas garland, and covering the Palace of Versailles in petals for Louis Vuitton, Bromberg Hawkings has experienced her share of highs. Though her day to day now centers on flora rather than fashion month, she’s discovered that her big career change isn’t all that different from where she began. “Flowers and fashion both appeal to people who have a deep passion for beauty on a fundamental level,” she says. “Neither is necessary per se, but they make your life happier and better. When I first [made the switch], I worried I’d be leaving everyone I know, but I’m relieved to see the people are the same, and so are the relationships. I’m in a different medium, obviously, but we’re all speaking the same language.”

Find a work look that can do both.

Dressing for a regular workday is a little tricky to navigate as were literally in a warehouse filled with flowers. Beautiful flowers—but it’s still a warehouse. There’s nothing glamorous about it. Still, I have to be ready to meet with clients or head over to Victoria Beckham’s house and do a walkthrough, so I have to have a uniform. I like to have a good pair of tailored jeans that fit well, a Saint Laurent or Tom Ford jacket because they’re still the best. Or a little Gucci blazer to dress things up. Then I add a pair of Gucci loafers, and I’m good. I can go to both places and be fine. I also keep a pair of Gianvito Rossi heels in my bag [and] I love them.

At first, I wasn’t into the whole Zoom thing, but then I decided in early May, after months of feeling terrible, that I was going to get dressed the way I usually would. [After that] I had my team put their cameras on; everyone was present and personable every day. There is such a link between how you put yourself together and how you feel, even if it’s just psychological. When you put your best face forward, it helps you think differently, and it made me feel like ‘OK we’re going to get through this.’”

At that time, I was also raising money, so I needed to look buttoned up in a blouse or something ironed that made me feel pulled together. I dislike the idea of just dressing from the waist up because how you dress can change how you think and how you project your confidence—even on Zoom! My style has changed so much though, the footwear is more comfortable, but jewelry is always fantastic. Everything can look a little flat on a screen, but a gold ring or bracelets will still work.

The English countryside is a fashion destination.

We’re so lucky we have a place in the Cotswolds where we can go every weekend. It automatically makes me reach for a delicious cashmere jumper that’s thick, warm, cozy, or a Barbour jacket. When you’re there, you understand why all the English and Scottish brands make such beautiful cashmere [pieces] it’s because they know exactly what to wear in the damp, wet, or cold. It’s not pretentious it’s all functional, but it also looks great. I love all those delicious Hunter wellies too that are lined and incredibly warm. I could be an honorary Brit because I’ve got a British husband and kids.

Lisa Eisner one of a kind supernova bisbee chrysocolla ring

I was raised in Dallas, where everything is bigger. Back then, everyone was in their very 1980s Dallas glamour. So big hair and big lips, and it was entirely over the top. I also have a very glamorous grandmother and mother, so I grew up amazed by the power of beauty and fashion. When either of them walked into a room, people would turn around and stare. Their presentation and what they chose to wear had such an impact on others—they wowed me.

Vintage muses can inspire more than your wardrobe.

Jackie Onassis and Audrey Hepburn were my style obsessions growing up, especially Jackie, a lasting influence. I thought it was so cool that she went to Vassar, a liberal arts school on the East Coast, then she moved to Paris and worked for French Vogue. Since I wanted to be her, I learned French and then studied abroad for a year during college. Everything about her was so glamorous. I love that John F. Kennedy quote [during their official visit to France in 1961] where he says, “I am the man who accompanied Jacqueline Kennedy to Paris.’”

Channeling your inner Emily in Paris is harder than it looks.

After I graduated from Columbia University, my grandparents had given me a little money as a graduation present, and I thought, “that’s it. I’m moving to Paris, and I’m going to work for French Vogue,” but lo and behold, they weren’t hiring. I also didn’t realize how hard it would be to get working papers. I was an American in Paris who spoke fluent French, and I had the fantasy of working in fashion, but no one was willing to sponsor me. After three or four months, I was broke, and I realized that I couldn’t stay there without a job. I thought I had gotten a fortune in graduation money, but it goes very fast.

As a last resort, I called a girl I’d done an internship with from a payphone and said, “look, I am desperate. Do you know anyone who is hiring?” She was working in the showroom at Gucci. She said “you’re never going to believe this, but Tom Ford is looking for a PA.”

Less is more when it comes to makeup.

I’m not a big beauty and cosmetics girl. I’m 46 now, and the less you do, the younger you look. If you put on a bunch of makeup, sometimes it can make you look older. I have friends who go overboard, and I’m like, “don’t do that; you look so much fresher without it.” So I keep things quite classic, but I always choose an eye over a lip when I do makeup. There’s an adage that says you have to choose either-or, and nine times out of ten, I’ll go for eyeshadow or liner. It’s a smokey eye for the evening if I do something dramatic, something with a little metallic in it, which I suppose is a bit of a Tom Ford throwback.

Emilia Wickstead is my best friend in the entire world, and I love her store. You go in there, and you feel like you are Grace Kelly. You instantly become feminine and powerful when you wear something she’s created. Hers is one of the only stores I actually go into, and I think it’s because the experience and atmosphere are so lovely [plus] the clothes are celebratory. Right now, you want something that reminds you of the old days when we all used to go out all the time. I used to crave time at home, but now it’s all reversed; I want to be out doing things. Eventually, [nightlife] will come back, but I think when it does, we’re all going to approach it in a more meaningful way.