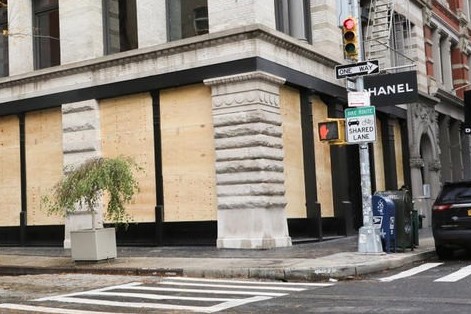 The likes of Chanel, Dior, Loewe, and Louis Vuitton have cleared out stock and boarded up windows amid fears of violent protests and civil unrest

In what’s become a familiar sight throughout the course of 2020, luxury fashion stores in New York are clearing out their stock and boarding up their windows ahead of today’s election.

In Manhattan, the likes of Chanel, Dior, Loewe, Fendi, and Louis Vuitton have all closed up shop, as workers covered their facades with plywood. Department stores including Macy’s and Bloomingdale’s have also been boarded up.

With Trump signalling he may not accept the election result and hinting he could refuse to leave the White House until all votes are counted – a process which could take weeks – the move to board up shopfronts comes as fears of post-election civil unrest and potentially violent protests grow.

Many of the stores taking measures to protect their premises also boarded up their windows during the Black Lives Matter protests that followed George Floyd’s murder in earlier this year. In New York, Gucci, Nike, and Bloomingdale’s were raided, while in LA, Rodeo Drive boutiques including Alexander McQueen and Marc Jacobs were targeted.

While many condemned the looting, Marc Jacobs – whose logo had been struck out and replaced with Sandra Bland’s name – supported the protests, posting a photograph of his store to Instagram alongside a caption reading “A life cannot be replaced. Black Lives Matter.”

Make sure you get your voice heard by voting in today’s election, and revisit our guide on how to protest safely here.