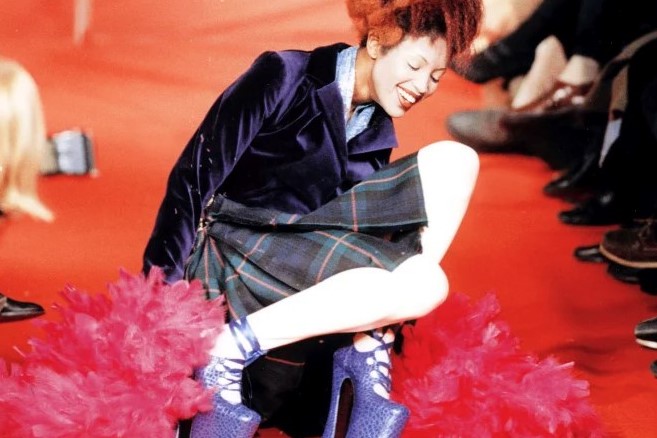 Many designers talk of empowering women with their clothes, but season after season put them in shoes they can’t walk in

Every fashion week features a few wobbles on the runway. Videos of models staggering and falling go viral and YouTube is full of “hilarious runway fail” compilations that rack up thousands of views. Naomi Campbell’s 1993 tumble at Vivienne Westwood may have gone down as an iconic moment shared far and wide across Tumblr and social media, but mostly, it seems, viewers have a sick fascination with watching the public humiliation of beautiful people.

This season was no different. At Poster Girl’s AW22 show, many models struggled to walk in the shoes they were put in and one model took a terrifying fall. The video of the fall currently has 2.8K views, compared to the 1K views on the video of the entire show. There were also plenty of near misses, at Kevin Germanier, Valentino, Dior, and more. At Diesel, one model couldn’t hold back the tears as she was led off the runway by a member of the production team, having made it only halfway round the mammoth set.

The inclusive Belgian fashion label fighting back against ‘curvewashing’

Supersized shoulders and hulking silhouettes: the age of Festercore is here

Footwear is often a source of stress for models at fashion week, not least because they often have to force their feet into shoes that are several sizes too big or small. “Providing shoes in the wrong size is a big problem in the industry,” says runway model Claudia Lavender, 24. “You end up walking unnaturally because your feet go numb.”

The discomfort of runway shoes is well documented. Each season, models finish Paris Fashion Week with feet blistered, battered, and bruised. “I’ve definitely messed up my feet and ankles from all the high heels I’ve worn,” says Lavender. “I always have to wear trainers in my day to day life just to give my feet a break.”

Some top models have even been forced to take a break from runway modelling due to injuries sustained from falls caused by uncomfortable footwear. Abbey Lee Kershaw tore a ligament in her knee when she fell at Rodarte’s SS09 show. When Lindsey Wixson retired from what she called “this high heel business” in 2017 she stated it was due to her foot injury. The model had previously fallen at Versace’s SS12 and AW14 shows, before spraining her ankle during a rehearsal for Jean Paul Gaultier’s SS15 couture show.

At Prada’s SS09 show, critics reported that the troublesome footwear was a distraction from the clothes. Two models fell and many stumbled in the sky-high heels they were put in. Models were crying and having panic attacks backstage because the shoes were so high.

“No look is worth being responsible for someone hurting themselves,” says stylist Jamie-Maree Shipton. “I’ve seen models complain over and over during walk-throughs backstage about shoes, and it’s fallen on deaf ears. If we can make sure a girl wears nipple covers or clip-on earrings for non-pierced ears, it’s not a long leap to accommodate a girl in pain, or who can’t stand or walk. It’s not a model’s job to feel uncomfortable to a point of severe pain, risking injury or putting them in a demeaning position.”

So, when they know it can be such a source of stress and discomfort, why do designers put models in heels they’ll struggle to walk in?

“If we can make sure a girl wears nipple covers or clip-on earrings for non-pierced ears, it’s not a long leap to accommodate a girl in pain, or who can’t stand or walk. It’s not a model’s job to feel uncomfortable to a point of severe pain, risking injury or putting them in a demeaning position” – Jamie-Maree Shipton, stylist

“High heels give designers more space to express themselves,” says Eelko Moorer, Head of MA Footwear at London College of Fashion. “They make the models taller and, once they’ve mastered the tool, can give them an empowering feeling. For me, the interesting thing about the high heel is that it’s on the boundary between empowerment and the opposite of that.”

High heels have been controversial for different reasons at different points in history. Whether they are empowering or disempowering depends on comfort, context, and the wearer. When Alexander McQueen created his infamous armadillo shoes for SS10’s Plato’s Atlantis show, models Abbey Lee Kershaw, Sasha Pivovarova, and Natasha Poly refused to walk in them. Nevertheless, models who did take part in the show managed to master them without falling and the shoes became instantly iconic, despite being unwearable outside of runway and editorial contexts.

Dirk Vaessen created his own version of limiting footwear for his MA Footwear project at London College of Fashion. The show went viral with many commenting how unwearable the shoes seemed to be. Vaessen’s footwear changes the posture and gait of the wearer, distorting how we naturally move, with the collection serving as a commentary on the rules society dictates about movement.

Vaessen practiced thoroughly with each of the models, ensuring that they felt comfortable and able to complete the runway walk. The designer even modelled the most complex pair of shoes himself. “I met all the models once before the show and we practiced until it worked,” he says. “I wore the most complicated ones myself because I didn’t know who would be able to wear them, but I know how to walk in them.”

However, models aren’t always given enough time to practice their walk in the shoes they have to wear. It’s not always statement shoes or sky-high heels that are the problem. The main issue is sizing rather than design, with models stuffing shoes if they’re too big or squeezing their feet in if they’re too small.

“My feet have scars from shows where I’ve worn shoes that are too small,” says runway model Lauren Kern, 22. “On multiple occasions I’ve worn shoes too big for my feet which has negatively impacted my runway walk. There are a lot of components that go into a successful runway show, but it makes the anxious pre-show feeling subside if at least your shoes fit.”

“On multiple occasions I’ve worn shoes too big for my feet which has negatively impacted my runway walk. There are a lot of components that go into a successful runway show, but it makes the anxious pre-show feeling subside if at least your shoes fit” – Lauren Kern, model

Established models sometimes get to make requests. When Gisele Bunchchen refused to wear heels at Balenciaga’s SS11 show, she was given flats. But for young models who are just starting out, this is rarely an option.

Wobbles and falls could well negatively impact their career and almost certainly knock their confidence. While many models see runway injuries as an occupational hazard, when so many models start so young, it raises questions about their rights and working conditions. “I think designers can be more considerate to models when choosing footwear by making sure they have the correct shoe size,” says Kern.

A complex shoe might be the perfect finishing touch to a collection, but unless models are given the right size and adequate time to practice, it could easily become the wrong kind of showstopper.