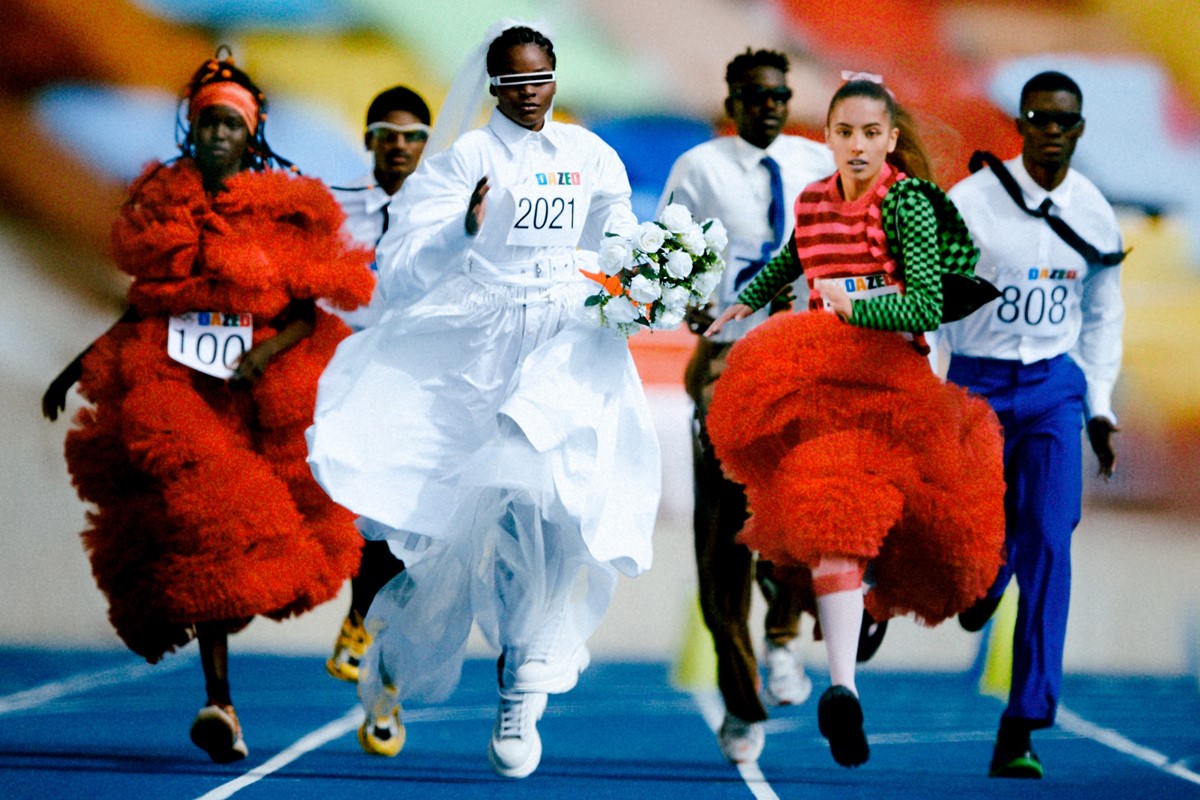 As our third, Olympic Games-inspired cover gets its debut, the creatives behind the editorial reveal how it all happened

Taken from the summer 2021 issue of Dazed

On your marks… Get set… GO.

Our new editorial and cover story depicts what are probably the best-dressed Olympic Games you’ve ever seen. In place of performance-enhancing spandex and ergonomic lycra are a succession of looks from some of the most exhilarating, joyful designers working today, as worn by models who fling themselves over hurdles marked ‘COVID-19’ and sprint with ease towards a more hopeful future. You’d be surprised just how much speed you can get up in one of Molly Goddard’s enormous frou-frou confections or a diaphanous Alexander McQueen gown – though sneakers courtesy of Virgil Abloh and Louis Vuitton likely help in this area.

Meeting the cast of Ck One’s new campaign, a story of American youthone future #ckone captures the perspectives of young Americans from across the country, shot by seven photographers in their home towns

Captured in a Paris sports stadium by photographer Carlijn Jacobs, with choreography by Eric Christison, the editorial marks new Dazed fashion editor Imruh Asha’s first huge cover moment. But how did it all come together? As our Fashion in the Fast Lane cover gets its grand reveal, members of the team who made the magic happen – including cover star Ana Jorge – talk us through their time on set, temperamental weather apps, and the ‘collective sense of power and positivity’ the images evoke.

“In preparation for the shoot, I really dove into all the different Olympic sports – from running and gymnastics, to hurdles and javelin throwing. I watched a bunch of old sport documentaries and visited the stadium beforehand to get a feel for it. The mood is definitely very Flo-Jo, who was a big inspiration.

The atmosphere on set was really amazing – it was outside and thankfully it was really sunny with lots of fresh air. The models were all super into it, laughed a lot, and in between shots they were suntanning. It’s a very positive story: they are literally jumping over the past, heading towards a better future. It was a lot of fun and so good to be out of the studio!

Eric (Christison, choreographer) is the best out there. He has amazing ideas for placement and is such a pleasure to work with – he has such an eye for details. The clothes were incredible too. We had this amazing Galliano archive dress that was insanely heavy but so beautifully layered – I wish I could have kept it! – and of course, the bridal McQueen look from the cover.

My favourite shot is the collage with all the different characters running towards the lens. I love the energy and fun in this shot. I’m so grateful and proud to be part of this new era (for the magazine) with all these great people who have something meaningful to say. I really respect Ibrahim’s vision and the movement he created already. I’m so proud to translate that into a different sort of world.”

“My initial message while coming up with the concept for the shoot was to show the world how the youth is trying to run away from these hard times. We went very literal with it and had the models run around an Olympic court. It was great to be outside, but the weather… We needed sun for some shots, so that was a bit challenging because there wasn’t much. I think I have six different weather apps on my phone now, and they all say something different.

It was a loooong day on set, so I played a lot of drum & bass to keep the energy and tempo up – it was great, and all the models were so excited to be running around dressed up. I wanted them in the total opposite of sportswear, and to make what they wore a total contradiction to the situation they were in. It’s a combination that’s not really been seen before – models running about in Molly Goddard gowns, archive Galliano stuff, Marni, McQueen, and more. The images have a lot of joy and energy about them.”

“I used to compete in track and field up into my high school days, so remembering the excitement and adrenaline leading up to the event was how I got into the spirit of the shoot. I wanted it to feel real and fun, and alive. I also looked at a lot of old images from the Olympics – not so much to analyse the movement, but to see how each jump, sprint, or hurdle was captured in order to emphasise the correct physical technique, along with the sheer force and joy attached to competing.

I flew into Paris from Helsinki for the shoot, and being in an empty stadium was surreal. We moved around freely throughout the day and staged these mini events as a team in a real track meet. I really tried not to wear the models out with a million laps around the track because it was important that the last shot be as strong as the first. They were champs! Most of them have some sports background, so it was fun getting them into the competitive spirit.

(When it came to the clothes), the way Imruh played with volume, texture, and layering allowed me to think about movement from so many perspectives. The clothes don’t need to be seen from one specific angle to feel complete, leaving lots of room to play. We both wanted the actions to feel like they could be executed regardless of what the look was – whether it was hurdles in a suit or a sprint in a gown, it was all possible. Looking at the final photos, I love that everyone is on the same playing field, all a winner in the end. Between the javelin-throwing nuns and the relay race, I think the whole thing shows a collective sense of power.”

“I didn’t really do much preparation for the shoot – I preferred just being myself. It was pretty intense on set – there was a lot of positive energy, and I loved working in this kind of atmosphere. We were on set for eleven hours in total, but I was having so much fun I didn’t realise that all that time had passed.

Being asked to run in a wedding dress by McQueen and Louis Vuitton sneakers and sunglasses was bizarre but so much fun. I loved the gown, and so would have loved to keep Virgil’s glasses and shoes!

I came to Paris as a migrant, so to me these photos are a reflection of the dream I’ve been chasing all my life thanks to my mother. Making the cover is a dream come true. I can’t even find the appropriate words to express my feelings – I just thank God for the blessings.”