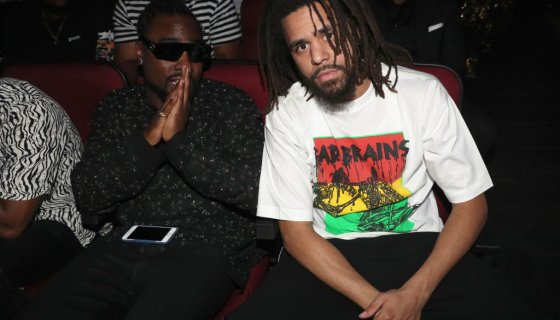 The protests erupting across the nation sparked by the murder of George Floyd in Minneapolis have grown in size with no signs of slowing down. On Twitter, fans are praising and for taking to the streets with protesters but there appears to also be some manner of brewing beef between the two past collaborators.

Twitter user @indiapitts21 took notice of a now-viral clip of J. Cole marching with protestors in his hometown of Fayetteville, N.C., and then tagged Wale in the tweet asking him to do the same.

“J Cole was out with Fayetteville. If that’s not the dopest Idk what is.. @Wale make us proud #DMV,” she tweeted.

In an alleged now-deleted tweet, Wale wrote, ” I’m sick of a lot of u acting like ya’ll messiah was the only one outside suck my d*ck.”

In Wale’s defense, he too was out with protestors in Los Angeles but it wasn’t nearly as publicized as Cole’s outing. But it didn’t exactly go on unnoticed either, so his reaction to the young woman’s ask seems rooted in something personal if anything.

What makes Wale’s jab at J. Cole even more curious is that the pair most recently worked together on the “My Boy (Freestyle)” track from the DMV rapper’s Free Lunch EP in 2018, not to include their other collaborators. Wale has however said in the past that his lack of popularity in comparison to peers like Cole and Drake is a matter of their skin tone, thus creating a divide between the pair in the eyes of some.

It goes without saying that Wale is obviously an important figure within Hip-Hop circles and J. Cole holds the same manner of importance. We will never pick sides between these grand champions because they’re both equally vital.

J Cole was out with Fayetteville. If that’s not the dopest Idk what is.. @Wale make us proud #DMV

Wale and J. Cole on the streets at they local protests. shoutout to them “boring rappers”

Since y’all retweeting. Retweet this too. J. Cole is not the only person out in these streets. Always trying to showcase @Wale in a negative way. Well not today. pic.twitter.com/TPzQMEwkVB

This is why it’s impossible to support Wale’s music. When the person is so damn corny, it makes their shit unlistenable, no matter how solid the music is.

If I was Wale I’d hate J Cole too

Much love and respect to the RAPPERS I see amongst the people. @Wale @FlexKartel @JColeNC @Mysonne pic.twitter.com/6AOTELKS4Z

Wale is such a jealous, bitter gargoyle with a Napoleon Complex. When he made the song “Shades” centering colorism about light skinned girls not liking him I knew this dude was a weakling. & we haven’t forgotten what he said about Black Americans.

Wale Right Though , Y’all Act Like J.Cole Gon Save Some Shit https://t.co/qmnP5ScJfk

What is Wale’s beef with J. Cole?

Wale didn’t have to shit on J Cole to make his point. Here he goes being corny as usual…see you stop your own success sometimes… https://t.co/Rvai4Lchyw

Wale and j cole beef might be the weakest beef ever

I got a homie, he a rapper and he wanna win bad
He want the fame, the acclaim, the respect that's been had
By all the legends pic.twitter.com/boNQwkr3oh

Wale mad bc people are mentioning J.Cole protesting , so he told people to suck his d***k What’s really going on ???

wale will never be as genuine and be a man of the people as j. cole and rapping wise j. cole is miles ahead

Wale trending for saying some shit about J.Cole but when the “ Sue Me “ video dropped he wasn’t

2) Since when did protest marches turn to some kind of competition? Talmbout "Make Us Proud"?

3) Is there another D.C artiste that's put on for the city like Wale? https://t.co/AtVZogOISA