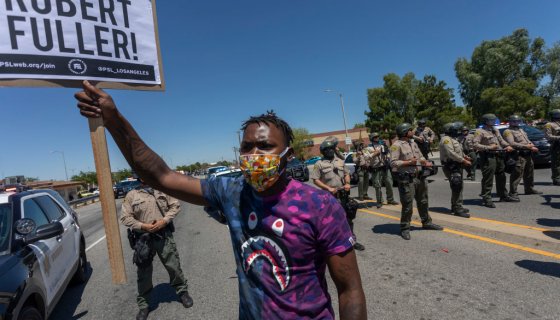 A pair of Black men found hanging from trees in California just 10 days and some 50 miles apart have sparked concerns that the two were lynched. Although the deaths of and Malcolm Harsch have been initially ruled as suicide, the families are questioning those details.

The New York Times published a story over the weekend regarding the investigations of Fuller and Harsch’s deaths. Fuller, 24, was found in Palmdale, Calif. last week in a park across from the town’s city hall location. Harsch, 38, was found 50 miles east in the town of Victorville near a collective of homeless individuals based by a public library on May 31.

With much of the nation and the world engaged in protests against police brutality and racial injustice, California has been active as well. However, the timing of Fuller and Harsch’s deaths have caused shockwaves in Los Angeles County with the families demanding answers and a full-on investigation of the incidents.

Fuller’s sister, Diamond Alexander, has been leading an effort to raise awareness regarding her brother’s case. Harmonie Harsch, the sister of Mr. Harsch, is leading her own investigation into her older brother’s death.

To everyone who asks me “Don’t #ALLLIVESMATER ?” Here’s my answer: Two black men were found hanged to death in in Victorville CA & Palmdale CA, 50 miles apart, 10 days apart, the authorities say both deaths were SUICIDE. This is why #BlackLivesMatter 100’s of yrs dealing w/ this pic.twitter.com/l7ihYEeJcN