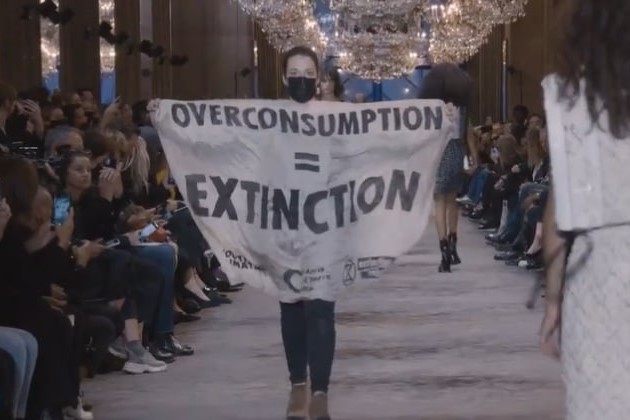 One year ago, an Extinction Rebellion activist crashed the runway at Dior’s SS21 show in Paris, calling out fashion’s “culture of excess and obsolescence” with a sign that read: “We are all fashion victims.” Now, another XR protester has popped up in Paris for SS22, this time targeting the Louis Vuitton catwalk to call attention to the climate crisis.

Against the backdrop of Nicolas Ghesquière’s “grand ball” in Paris’ Passage Richelieu, two activists attempted to crash the show. Though one protestor was swiftly removed by security before they even hit the runway, their colleague broke out onto the catwalk with an “Overconsumption = Extinction” banner, before she, too, was hustled away. Alongside Extinction Rebellion, the banner bore the logos of two French environmental activist groups: Les Amis de la Terre and Youth For Climate France.

Imagery from the runway invasion was also shared via the official Twitter of Extinction Rebellion France, which staged an additional demonstration outside the event. In the caption, the organisation writes: “What could be better than Paris Fashion Week with LVMH, symbol of French fashion, to recall the impact of this industry?”

“It is urgent to ACT to reduce our carbon emissions!” adds XR France. “The fashion industry accounts for up to 8.5 per cent of global greenhouse gas emissions. The government had opportunities to adopt ambitious regulations on this sector… but did nothing.”

Bolstering its 2012 LIFE (LVMH Initiative for the Environment) programme, the luxury group, and specifically Louis Vuitton, has laid out a roadmap for the next ten years of sustainable development. Dubbed LIFE 360, this call to action has four key objectives: to improve the environmental performance of products, to create conscious supply chains, to improve the environmental performance of real estate, and to reduce CO2 emissions.

With deadlines within the next three, six, and 10 years, all brands under the LVMH umbrella have committed to increasing the transparency of their processes, procuring a circular economy through recycling, upcycling, and identifying alternative eco-friendly materials.

Of course, crashing the catwalk is nothing new: everyone from YouTube pranksters to PETA have stolen the spotlight during fashion weeks gone by, with an actual cat getting in on the action at Dior’s cruise show in 2019. Revisit some of the most memorable invasions here, and watch footage from Louis Vuitton’s SS22 show below.

Two of the involved activists are being held at a Paris police station in the wake of the action, according to XR France.