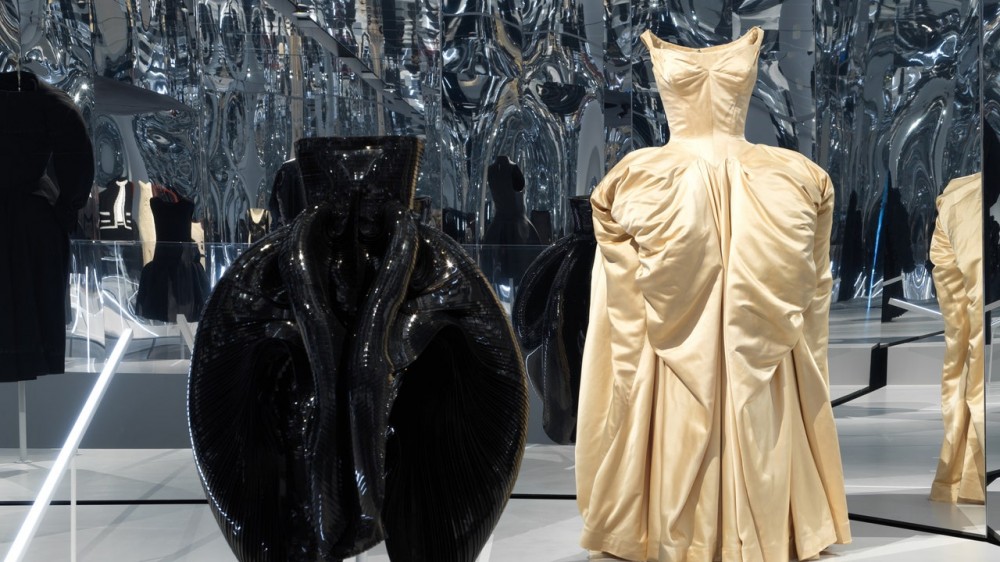 There will be no shortage of time puns heralding today’s preview of the Metropolitan Museum of Art Costume Institute’s new exhibition “About Time: Fashion and Duration”. So here’s one more: It’s about time this exhibit opened. Postponed due to the COVID-19 pandemic from its original May 4 date, “About Time” will finally swing open its doors to the public on October 29, nearly half a year later. As such, it has had one of the longest gestation periods of any Costume Institute exhibition—ironic for a show whose very subject is time and timeliness.

That irony is not lost on Andrew Bolton, the museum’s Wendy Yu Curator in Charge of the Costume Institute: nor is the paradox of opening a fashion exhibition about time in a year in which time itself has gone out of fashion. Isolated in our homes for most of 2020, we are all feeling a bit unstuck from time—Bolton included. “Now, because of what is happening, there is such a difference between objective time and your internal time,” he says. “I never really thought about it until I completely experienced it. The time in your head is so out of sync with the time of the clock.”

This topsy-turvy notion of time plays out in the masterworks from the Met’s collection that Bolton has curated. The exhibition, which celebrates the museum’s 150th anniversary and is sponsored by Louis Vuitton, operates with two timelines of entirely black garments and is ghost-narrated by Virginia Woolf, whose Orlando serves as the spiritual backbone of the exhibition. The first timeline is a linear one from 1870 to 2020 that Bolton describes as Baudelarian, stressing ideas of fashion’s “ephemerality, obsolescence, and progress.” The second narrative is that of the “disruptions,” garments placed just behind those in the linear timeline that draw parallels in silhouette, material, and philosophy across eras.

The first coupling of the show is a bustled mourning dress from the 1870s set beside a curvaceous Elsa Schiaparelli evening dress from 1939. Then comes a princess dress with a dropped waist and darted torso inspired by the style of Princess Alexandra of Denmark beside Alexander McQueen’s famous bumster skirt, both garments emphasizing an ultralong torso through radically different means. The pairings play out like this in the exhibition’s darkened first gallery: Nicolas Ghesquière’s jacquard vest from his own time-traveling show at Louis Vuitton against a 1902 riding jacket, Chanel LBDs with Norman Norell’s and Virgil Abloh’s clever send-ups, and Jeanne Lanvin’s big pannier hips beside Jonathan Anderson’s for Loewe right up until 1957, where a wasp-waisted Hubert de Givenchy strapless dress with floral embroideries is set beside Raf Simons’s 2013 take on the silhouette for Dior. Turn a corner after that duo, though, and time explodes.

The museum’s second gallery is an entirely mirrored room that picks up in 1958 with Cristobal Balenciaga's 1958 bubble dress beside Ghesquière’s spring 2018 Louis Vuitton pouf. What will grab viewers’ attention beyond that clever duo are the years that shortly follow. Representing ’68 are Paco Rabanne’s plastic mini (paired with a 2012 Noir Kei Ninomiya look) and Rudi Gernreich’s zip dress (paired with a 2003 Alaïa). Rabanne’s is slinky and sexy, made from linked plastic discs, while Gernreich’s is mod-ish and crisp. Beside each, a little forward and a little into the past, are a prim 1966 Yves Saint Laurent suit and a seductive 1973 Halston maxi. Found in these seven years is the narrative that shapes fashion to this day: the disintegration of trends.

Fashion’s frenetic and chaotic history from the 1960s to the present comes to light in this second gallery, reflected and folding back over itself. The legible deflating and reflating of silhouette that defined the 1870-to-1950s timeline is replaced here by a veritable grab bag of styles. Bolton refers to the narrative of this gallery as “achronological, fragmented, nonlinear.” The proof is in the looks chosen to represent the year 1994: Gianni Versace’s infamous and revealing safety-pin dress, a curve-hugging paneled knit by Azzedine Alaïa, Issey Miyake’s plissé “flying-saucer dress” with cartoonish parabolic curves, a sheer Vivienne Westwood dress that reveals padded underpinnings, and a delicious bias-draped slip by John Galliano. They’re all body conscious in their own way but do not reflect the unity of a single shape the way Dior’s New Look, say, defined the fit-and-flare look of its era.

Can we? The industry is markedly aware of overproduction and overconsumption, and yet staying in business means soldiering on down the path of more, more, more. It’s an idea that is illustrated, perhaps unintentionally, with the inclusion of designers that history has forgotten due in part to their unwillingness to play fashion’s more-is-more game: Xuly Bët’s Lamine Kouyaté’s upcycled lettuce-hem dress is included beside Stephen Burrows’s 1975 original lettuce-hem ensemble. “I end the show with that idea that the 24/7 need for everything, that instantaneity and immediacy, has halted time,” Bolton says. “That really needs to be addressed.”

The last look in the show, unlike all the others, is white. Viktor & Rolf’s upcycled patchwork smock dress is suspended like an angel just before the exit, with a halo of lace and light around the mannequin’s head. Bolton says the haute couture look serves as a sign of hopefulness for ideas of sustainability, community, and togetherness to transform the fashion of the future. Will it take? Time will tell.

“About Time: Fashion and Duration” opens at the Metropolitan Museum of Art on October 29. Entry is possible with a timed ticket. The exhibition is made possible by Louis Vuitton. Corporate sponsorship is also provided by Condé Nast. Additional support is provided by Michael Braun, John and Amy Griffin, Nancy C. and Richard R. Rogers, the Natasha and Adar Poonawalla Foundation, and the Laura and Raymond Johnson Fund.