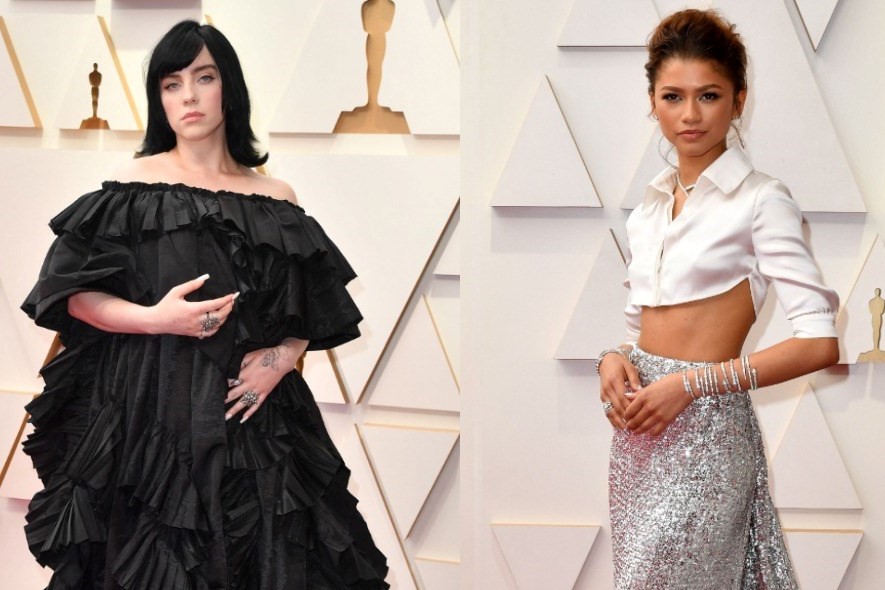 In 2001, Björk stepped onto the Oscars red carpet with a stuffed swan’s neck lolloped around her bare shoulders, which was the same year Lizzy Gardiner wore a shift dress that had been strung together from (expired) Amex Cards. Prior to that, there was Celine Dion in John Galliano‘s back-to-front tuxedo and the serpentine, safety-pinned, Versace LBD that launched Liz Hurley’s career. But true red carpet innovation is about so much more than engendering headlines and boosting celebrity – it’s actually an act of generosity.

An intelligent wielding of fashion is a chance to welcome the public into your mind-maze, handing out morsels of one’s interior life as if it were corners of bread to the needy. Social media spoiled the illusion that fame was synonymous with being interesting a very long time ago but what do this year’s outfit choices say about our pop cultural figureheads? Or rather, what can it say, when even the most zeitgeisty faces, like Zendaya, decide to wear a bralette and skirt to the most glamorous, eyeballed event of the year. She looked nice! And so did everyone else! Zoë Kravitz in Saint Laurent, Lupita in Prada, Jada Pinkett Smith in Glenn Martens for Jean Paul Gaultier. All lovely! But where’s the panache? The risk-taking? The blue-sky thinking?

Lest I conjure the spirit of Joan Rivers and her Fashion Police posse, it’s worth noting that all of these things are subjective, and as long as attendees, like Kristen Stewart, felt comfortable in their Chanel shorts, that’s all that matters! This isn’t so much an issue with individual celebrities and nor is it a shortage of creativity on the runway. Rather, it seems symptomatic of a pretty prosaic culture at large. No wonder so many young people are nostalgic for a time they didn’t even live through, rifling through old Celine Dion and Björk looks on archival Instagram accounts. Flick through the list below to see what a fine (!) lovely (!) nice (!) evening fashion had at the 2022 edition of the Oscars.