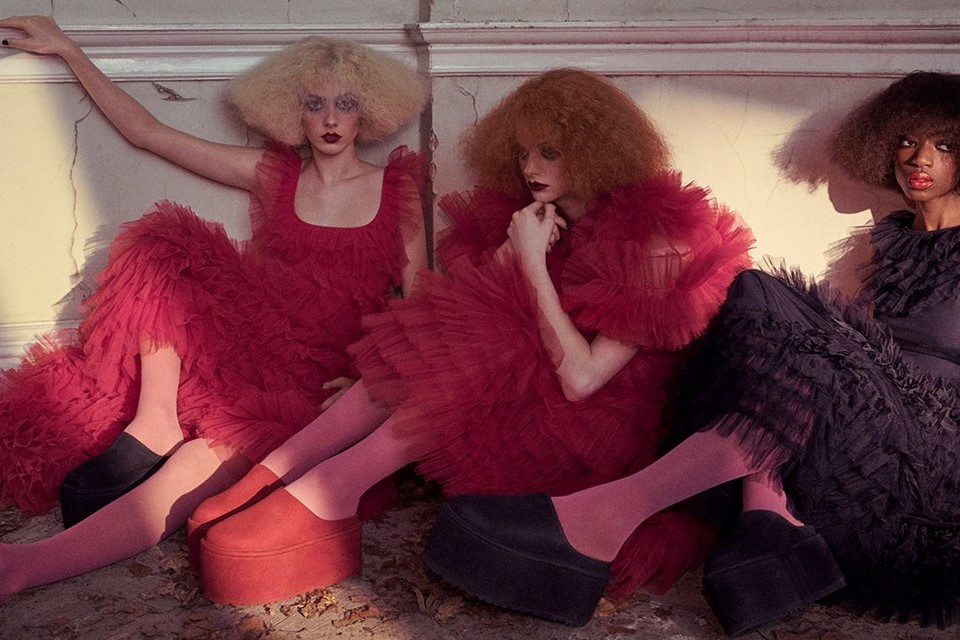 The classic UGG boot has long been an iconic footwear style – cut to Paris Hilton wearing a pair with a Juicy Couture tracksuit circa 2001 – but recently, it’s captured the attention of the fashion industry elites. First, Glenn Martens of Y/Project stretched the UGG until it met his AW18 model cast’s thighs, before Eckhaus Latta chucked a heel on it and changed perceptions once more. Meanwhile, just last year, Telfar Clemens linked up with the Californian label for a very special shearling version of his legendary Shopping Bag that whipped fans and followers into a frenzy.

The latest designer to get her hands on the UGG is London’s own Molly Goddard, who debuted a collaborative footwear collection with the brand at her SS21 show in October. Sending a series of her signature frou-frou tulle smock dresses and brilliantly bath pouffe-esque tops down the runway, the finishing touches came via chunky, stacked suede platforms in a multitude of Crayola-bright colours, or otherwise, soft and fluffy shearling slippers.

“I love shoes to either complement or contrast with the collections and have had the platforms in my head for a few years. It was great to work with UGG and their materials, and to play with colour and texture, which is so key to all my collections,” explains Goddard. “The platforms are suede with a contrasting sheepskin inside – I like the idea of having this solid smooth block of colour on your foot with the surprise cosy colour inside.” In addition to the chunky mules and the slippers, there’s also a mini boot embroidered with delicate white flowers. “I was looking at old cowboy boots and a leather jacket I own (when it came to that style),” she adds.

Now, the collab is finally getting its release, landing on digital shelves today, and though she only recently slipped on a pair of UGG boots for the first time, Goddard declares herself a convert. “I desperately wanted a pair of the tall black ones to wear with the velour Juicy Couture tracksuit when I was a teenager, but I didn’t get either which was very sad,” she reveals. Finally, she was given a pair of the brand’s mini boots last year: “I genuinely struggled to take them off for a week, they were the cosiest thing I had ever worn.”

More recently, she’s turned to the platforms from her own collection. “They’re SO tall but also incredibly comfortable and easy to wear. They make me into a giant – I’ve been stomping around the studio in them.” According to the designer, despite appearances, they are also incredibly easy to walk in – meaning, at this point, we’re totally sold.

Check them out in the gallery above and head here to see the full collection.