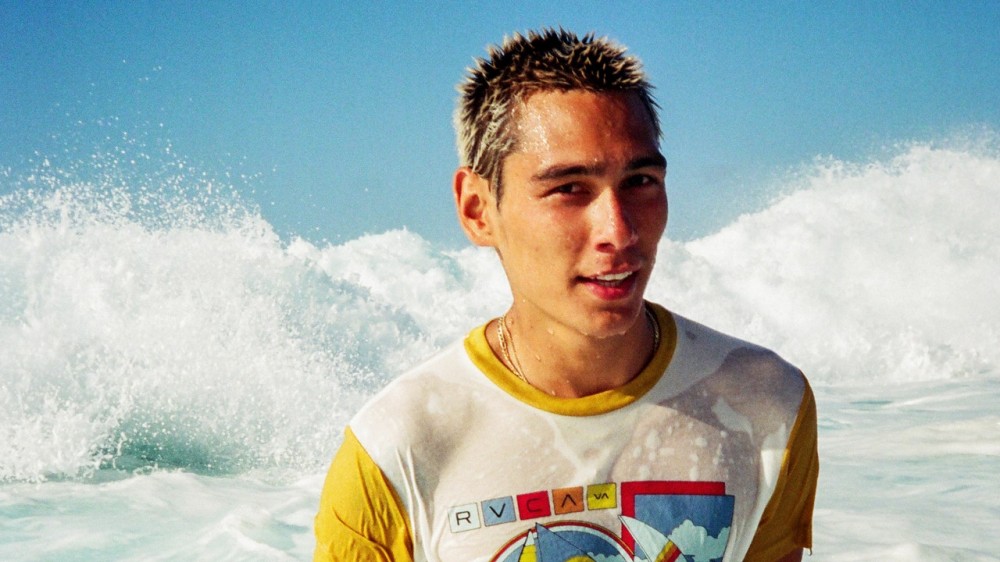 If you don’t know about Evan Mock, you’re definitely about to: The native of Oahu, Hawaii, is starring in the buzzy upcoming Gossip Girl reboot as Aki Menzies (details about his character are mum, but early photos from set depict him as a pink-haired, skater kid at a private school). In the meantime, he’s been taking the fashion world by storm by recently modeling for Calvin Klein, Gap, and Louis Vuitton. But even though he’s transitioned into the world of high fashion, Mock tells Vogue that his laid-back approach to style continues. He grew up surfing and skating in his native state, after all. “I still walk around shirtless everywhere,” Mock says. “Being in Hawaii, I was also in board shorts all the time. But I don’t do that in New York as much.”

After taking over the runways—and, soon, our TV screens—Mock is dipping his toes into design as well. Tomorrow, he launches the first of three collections he created with RVCA, the Californian lifestyle brand specializing in surf and skate clothes. “It’s really special because it’s so intertwined with my family heritage and Hawaii’s history,” says Mock. “It’s all things I want to wear.” He wanted the clothes to be timeless and classic in spirit, in addition to channeling his Hawaiian roots. “I designed the whole thing when we were in the heat of COVID,” he says. “We didn’t know how long this was going to last, so it got me thinking about making a timeless collection that would live forever.”

The first collection drops June 15 and includes a focus on palaka prints. “I wanted it to be vintage Hawaii [inspired]—the culture of Hawaii that I grew up with,” says Mock. Some of the pieces, like the board shorts and button-up shirts, have a vintage, worn-in feel. “I got them to make the shirts look washed and cracked,” says Mock. “The vintage shirts look old from the ’70s—like you bought it off eBay or something.” Future drops in August and October will also include beach towels, varsity jackets, hoodies, utility pants, and board shorts.

For the ongoing collaborations, Mock wanted to involve his family in Hawaii, as a way to nod to his roots. “I wanted to glorify what my family members’ talents are,” says Mock. His dad, for instance, made the palak-print surfboard fin. “He’s been making fins since the ’70s; he’s done the fins for everyone in the surf world, like Gerry Lopez,” says Mock. “I base my whole work ethic around him. He touches everything by hand and is involved in the process from A to Z.” A beach towel in the collection was also made in collaboration with Slowtide, a company run by Mock’s sister and her husband.

As for what Mock will be up to this summer? He will be on the set for Gossip Girl, of course. While he can’t tell us much, he says the show is going to be as good as the trailer makes it look. “We’re getting into the rhythm of being a show and figuring out the vibe,” says Mock. “We’re going to be filming right until when it’s out.” When he has free time, he also hopes to travel to somewhere like Italy or Japan. When he’s in New York, though, you will likely find him surfing at a beach like Rockaway. “I don’t surf here as much as I would in Hawaii, but it’s fun,” Mock says. “You’ve got to want it more in New York, because you have to get a car or take the train. It’s a whole excursion.” At least he'll be making the long trek in his new threads.