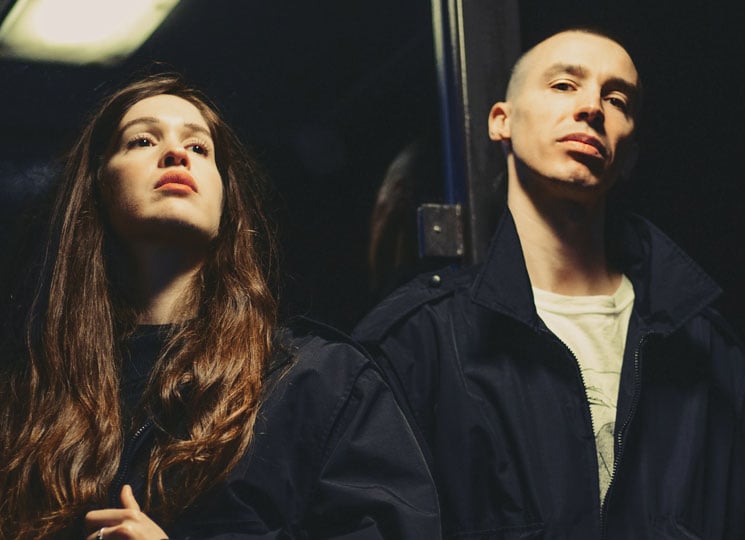 It’s been a couple years since Montreal duo Essaie Pas released their last album, Demain est une autre nuit (“Tomorrow is another night”), but they’ve been busy nonetheless. While Marie Davidson released her own solo record, Adieux Au Dancefloor, to much acclaim, Pierre Guerineau has been producing for acts like Bernardino Femminielli, Pelada and Ginger Breaker. The interim saw the married couple a few thousands miles apart, with Davidson doing a stint in Berlin, while Guerineau split his time between Montreal and Los Angeles. It was a time reflection, as they re-evaluated what they needed out life, and decided on the concept for their latest record, New Path, which any fans Philip K. Dick will recognize as the name shady drug rehabilitation centre from his book, A Scanner Darkly.

The entire record is based on the book, and it shows: it’s a drugged-out, paranoid slice hypnotic techno and cinematic jams. “We found that its subject matter really touched us,” Guerineau says. “Addiction, loss, surveillance, paranoia, what is reality? Is it an illusion? Those themes were already weird in the ’70s when he wrote it, but today we’re talking about them all the time. It’s also the first time we actually adapted someone else’s work into our own. It was mostly inspired by our personal lives, too, though. So, even if we talk about someone else’s work, it’s still a personal album.”

While the optimum listening setting is probably in a club, it’s still a far cry from a look at dance culture. “For me, I think it’s really important to say that the album] goes far beyond club culture,” says Davidson. “This album has echoes club culture, because we perform in clubs, but it has nothing to do with them. The book does talk about addiction though, and we both have personal experience with that. There’s addiction in my family, and in some my friends, but it goes far beyond even that. I think about people in the streets, people with addictions all around the world. The characters in the book don’t go to clubs, they’re junkies who work to get their drugs. They’re the leftovers from society, the unwanted. This is what I find really touching in the book, and it’s what I want to convey in the music.”

In this sense, New Path is a complete success. Essaie Pas have perfectly captured the jittery anxiety that Dick’s characters go through. Just listening to “Complet Brouillé” and “Futur Parlé,” whose lyrics look at the very nature past, present and future, it feels like you’re transported to a police state, where “the man” is ready to snatch you up at any moment. It would also serve as a far better soundtrack to Richard Linklater’s on-screen adaptation, and if that’s not a successful reinterpretation A Scanner Darkly, we’re not sure what is.