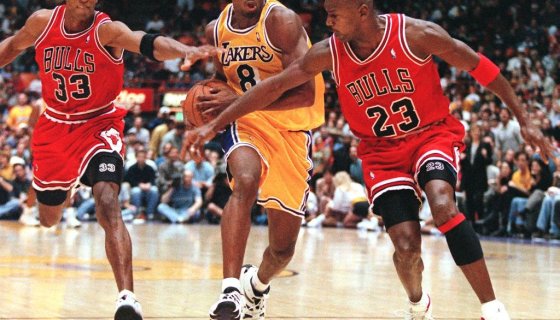 Now that ESPN’s docu-series has become a monumental hit with OG fans the Michael Jordan led Chicago Bulls and sports enthusiasts in general, whispers have begun circulating that another iconic and beloved NBA legend would get the documentary treatment: (R.I.P.).

According to ESPN, an all-access film crew did indeed shadow the Black Mamba during his final Lakers season and that footage could very well end up becoming a docu-series a la Last Dance. Just like the camera crew that followed his Airness around for the Chicago Bulls 97-98 Championship season, Kobe’s team consisted of as many as six personal camera crews who were on hand to capture his 60-point finale.

Bryant’s camera crew, several Lakers staffers from that season said, had unparalleled access in locker rooms both at home and on the road, in the training room, throughout the team’s practice facility and even on the team’s charter plane.

“They had unprecedented and, by far, greater access than anyone else ever,” said John Black, who led the Lakers’ public relations department for 27 years, last serving as vice president. “We certainly allowed them to do everything we could within what the league would allow, and sometimes, with a wink and look-the-other-way, allowed them even more.”

Though it was initially supposed to be a regular documentary that would release a few years down the line, given Kobe’s tragic death coupled with the response that this Bulls docu-series has received, it’s very much a possibility that all that footage will become a 10-part series sometime in the future. While Kobe’s final season with the Lakers wasn’t exactly representative of his illustrious career (they went 17-65 that season), it would still be a must-watch for any true blue Laker fan who viewed Kobe as Michael’s one true heir apparent.

Would you be interested in a docu-series revolving around Kobe’s final season or should it be a one-shot deal? Let us know in the comments section.