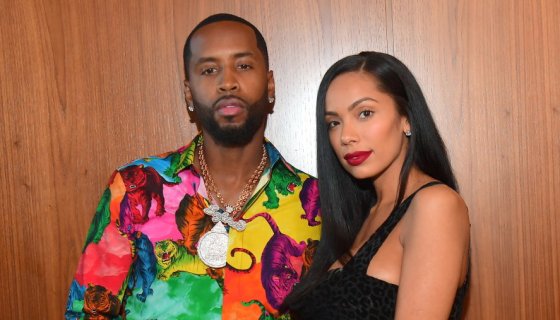 and have taken the art of thirst trapping to a whole new level.

On Monday (Jul 20), the and new parents began their onslaught of promotion for the adult-content themed Only Fans account. Dropping the link Twitter, teased fans that they could “be a fly on the wall” with her and accompanied by a risque video that gives fans a glimpse of what to expect on the other side of the curtain.

“Be a fly on our wall,” Erica Mena wrote. “My husband joins me on my OnlyFans.”

Be a fly on our wall. My husband joins me on my Only Fans https://t.co/Tyo11ROPes pic.twitter.com/xTPpgqGBOx

Screengrabs from her OnlyFans account posted by The Shade Room show the ambiance of the infamous red light, tongue and devil emojis, with the saucy description, “Satisfying my husband for the first time ever on here! Unlock this red light special to see it all go down.”

Whew! #EricaMena is not playing games on her OnlyFans page. Today she reportedly teased fans on the app with a message saying she dropped a video of her “satisfying” her hubby #Safaree. ____ The steamy video reportedly involved nudity and some tongue kissing. Both Erica and Safaree joined the app not too long ago during the pandemic.

While Erica Mena was tantalizing the men, Safaree had a gift of his own for the ladies after he dropped a salacious clip of his own. Dropping a two-second clip that features the Jamaican TV personality in the shower with the camera on his chest before looping as if lowering to show you his goods, of course, he dropped the link to his Only Fans, promising fans they can “see the rest.”

To get the behind the scenes access, are charging fans only $50, but some fans claim that the promise is bigger than the actual product itself.

Hate it or love it, the Samuels are getting paid. Back in May, the couple revealed that they were earning a whopping six figures from the adult-only venture and have no plans of deactivating the page after rapper turned online personality Khia called the couple out for their adult-entertainment venture.

“Hey someone go tell that fake a** India Irie I made 6 figures in 2 weeks and if she needs help during this quarantine I’m down to help her so she can get a better looking camera!! Washed.com,” Safaree wrote in a since-deleted post.

Wayment! #Safaree and #EricaMena post their earnings from #OnlyFans after #Khia blasted them for making the accounts in the first place! 👀 #TSRCoinz (SWIPE)

While the two are baring it all for the world to see in regards to their life, when it comes to their five-month-old daughter the two are much more private.  Since the pair welcomed their daughter in February, they’ve been far more intent on protecting her privacy, giving only slight glimpses of the baby to the public. The couple also has yet to reveal her name.