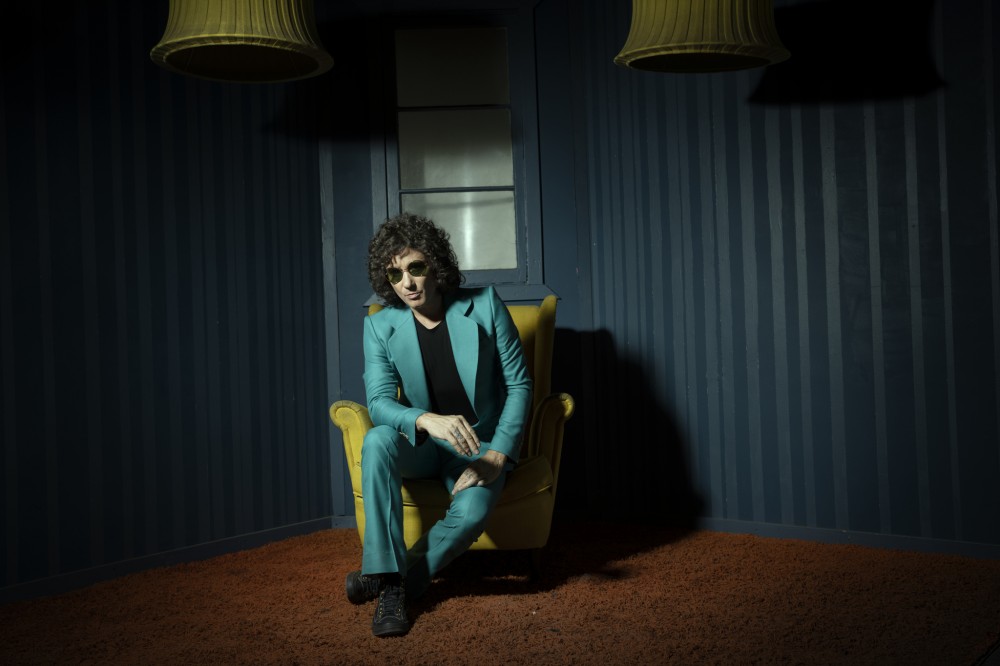 For over three decades, Spanish rock legend Enrique Bunbury has spun fantastic stories of dark fantasy and probed the depths of universal human emotions through his songs. Yet in his disquieting and introspective tenth studio album, Posible, he delves into the many alternate worlds that exist within himself.

“Other versions of yourself exist, whether that’s being a better husband, better father, or better lover,” he says of his new album, out Friday. “Those options torture me, and they give me hope.”

Born Enrique Ortiz de Landázuri Izarduy in Zaragoza, Spain, the Spanish prodigy began writing songs at the age of seven. During his adolescence, he adopted the stage name of Bunbury, inspired by the literary work of Oscar Wilde, The Importance of Being Earnest. “[In the play], Bunbury is the name used by a character when he’s living his double life. It was a suitable nickname for me because it was actually a parallel life to the ‘normal life’ I had,” he says. “Today there is no separation from me and my alias.” In the mid Eighties, he began fronting Héroes del Silencio, the theatrical alt-rock group that further propelled the rock en español explosion of that decade.

With his rebellious approach to Latin alternative and eclectic musical influences — ranging from Bowie to tango performer Roberto Goyeneche and ranchera singer José Alfredo Jiménez — Bunbury built a successful career as a soloist. In 1997, he released his first solo album Radical Sonora, and ever since, he’s been captivating onlookers via his nonconformity to explore new musical terrains. With the experimental electro-rock of Posible, Bunbury distances himself from his cowboy-rock balladeer persona and deploys dissonant synths and piano colored by an atmospheric suspense, while retaining his ability to craft an anthemic hook.

“Rock as a genre is simply another color that I’ve utilized in my career,” reflects Bunbury. “If you want to look ahead and contribute to something in the present, maybe it’s good to utilize newer tools and to expand your horizons, and not waste the present.”

The word “possible,” also the title of your new album, evokes a feeling of hope. What does that mean to you?
In almost every song of the album, there’s a phrase that references the options we’re presented in life and their possibilities. Whether they are the ones we have neglected in the past, or our future [ones that would influence alternate] versions of ourselves. Oftentimes we believe that we are condemned to only one way, and I’m not talking about our profession — Isabela the journalist, or Bunbury the singer — but the possibility that we can choose to be otherwise, to be different. What would you have been instead of a journalist? What if tomorrow you decide to open up a bakery, or if I suddenly became a shoemaker? Possibilities can change a person. The fact that those possibilities are at our disposal is a very hopeful and positive thing.

During your live performances, we’ve seen you take a stance for civil rights, like when you’ve introduced your hit “El Extranjero” (“The Foreigner”) where you’ve often conveyed solidarity with immigrants around the world. How do you navigate activism and creativity?
Precisely, my last two albums Palo Santo and Expectativas have an exterior viewpoint. This new album sees things more introspectively. As a songwriter, that is an option at hand — to shape and reflect your own opinion with respect to the world you have lived in. [My] personal and socially-driven songs are there, including songs that don’t talk about anything but only serve as a stylistic exercise. For example, we can write about a light bulb or an avocado, which can be fun and entertaining. There is no personal involvement or social outlook there. I think that you can do that with social activism, and we can envision another existence as we analyze the things that concern us as a society. Or, we can observe things that are of concern to others, but that don’t necessarily affect us. For example, Mexico has a policy of non-intervention when concerning foreign affairs. It might be ridiculous that as a songwriter I can have an opinion on what goes on there, or anywhere else [in the world].

Posible captures a more experimental sound than anything you’ve ever recorded. Though last year, we saw you dabble with an off-kilter electronic sound with Wired Sessions.
With this album I had a specific sound in mind. As you described, I wanted it to be more experimental and get closer to using certain elements of electronic music, without forgetting that in the end what I make are songs. I want what José Alfredo Jiménez sings about, “¡Yo compongo mis canciones pa’ que el pueblo me las cante!” [“I compose my songs for the people to sing them back to me!”] I wanted there to be a clear song structure: verse, chorus, bridge. Although there is more experimentation, I wanted the songs to sound more interesting, for it to take me places where my voice had never been before. I approached the songs with the same format of how I play with my live band, and when we started recording the album, the sound took another turn. On one side, it features my musicians playing their instruments, and on the other, there’s a lot of work done through computer [softwares]. I co-produced the album with my drummer Ramón [Gacias].

Looking back to when you fronted Héroe del Silencio, the band stood at the epicenter of the rock en español explosion during the Eighties and Nineties. What was that experience like for you?
It was a musical bloom that occurred almost simultaneously in different countries. During the mid-Eighties to mid Nineties, lots of fantastic bands emerged. They made big albums that left a mark on the history of Spanish-language music. Today, there is a mythification of that era. Though I remember that time with great difficulty. From touring, to doing concerts, and going to radio stations, we [the band] faced a lot of misunderstandings. I remember going to media outlets and being interviewed, and they would ask us about our earrings, nails, hair, and about our way of dressing — as if we were Martians. And, well, the music wasn’t so openly accepted. Let’s just say there was a certain young population that enjoyed our music on the streets. But on the radio and commercials, all you heard was Luis Miguel, romantic pop, and regional music. I don’t remember Héroes del Silencio having media coverage other than being featured on MTV for a few short years.

Music has changed a lot since then. How did you witness that evolution?
Music took a turn in the late Nineties. What we called rock en español transformed into Latin alternative. Fantastic bands emerged throughout Latin America that looked beyond the conventional sounds of rock. These alternative bands were interested in the change that Anglo pop and rock was undergoing, but [they approached it] with a Latin perspective, like Babasónicos and Zoé. Even after the 2000s, many other great bands emerged that became big names and recorded fantastic albums — even better than the ones released during the rock en español era. In the last 20 years, many Latin alternative albums have been made with great producers and engineers, and newer generations emerge as much better musicians.

I read an old quote from 1999 where you say, “Rock was once censored and we preferred to rebel. Now we are in a process of normalization… I want to recover the origins of rock in its most animalistic form…” What are your thoughts on that today?
I don’t think about rock as my dog. It’s not something I have to take care of or feed. Rock as a genre is simply another color that I’ve utilized in my career. I don’t know to what extent we can talk about rock being transformed into this or that. I think that today music is made with different colors, and it’s made with different tools and from another perspective. If you look at Jimi Hendrix or Deep Purple, it’s good if what you want to do is imitate the past. But if you want to look ahead and contribute to something in the present, maybe it’s good to utilize newer tools and to expand your horizons, and not waste the present. I’m not a person who listens to classic rock while driving. I’m not a person who plays albums at home by the Rolling Stones. I like songs that are recorded nowadays. I’m not nostalgic.

What new sounds are you intrigued by now?
What I liked about music in 2019 were Billie Eilish and Lana Del Rey’s new albums. Pitchfork has included Lana Del Rey in the rock category. They categorize very interestingly and will tag something as rock simply because there’s a guitar featured. I wouldn’t even know what to call Billie Eilish’s music, I guess it would be pop but it’s pretty dark. The production is spectacular and it has some great songs.

Posible is due out Friday via Warner Music. This interview was originally conducted in Spanish.

"I don’t think about rock as my dog," Enrique Bunbury tells 'Rolling Stone.' "It’s not something I have to take care of or feed. Rock as a genre is simply another color that I’ve utilized in my career."