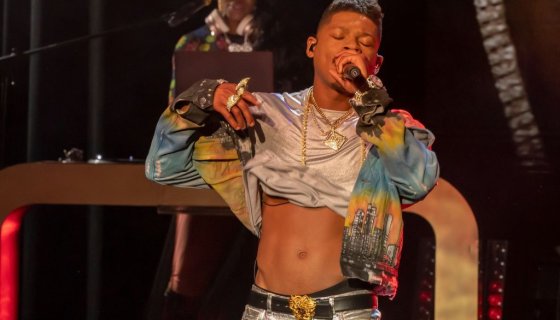 may have been the “top dog” on the hit show, , but it seems his dog in real life is being accused of causing some pretty extensive damages at his rental home and the landlord wants the money back.

According to TMZ, Chicago landlords Vinod Venugopal and Payal Shah sued the star after claiming that Gray and his dog “terrorized” the building he rented while filming the .

In court documents obtained by the site, the landlords say they rented Gray a condo inside their four-unit Chicago complex in August 2019, it was there that they claim Gray, among other things, left his dog inside the condo for extended periods of time. They also claim the dog was left unattended in common areas in the complex and urinated and defecated all over the place.

The landlords claim the urine and feces significantly damaged the hardwood floors, stairs, and other parts of the property. Documents also note that the landlords claim that was also jumping in and out of windows, clogged the toilets by flushing down condoms, smoked weed in the place when smoking’s not allowed under the lease, and engaged in unsanitary activity including, but not limited to, eating breakfast in one of the bathrooms–resulting in damage that totals a whopping $26,120.

The landlords say they reached out to Gray’s team to settle the dispute prior to filing the lawsuit but was unable to reach a resolution. Resulting in the property owners seeking money for the damages plus an additional $7,000 to cover their attorneys’ fees.

Bryshere Gray’s manager responded to the lawsuit stating that he was “disappointed” in the landlords’ decision but affirming that the debt will be paid.

“Bryshere was diagnosed with ADHD years ago and unfortunately this is a result of that,” Charlie Mack told the site. “He is a great person and they can rest assured that this will be taken care of. There is money inside of his security deposit that should rectify whatever issues the landlord has. [It’s] sad that the landlord has chosen this way to handle this but we will do what is needed to make sure it is taken care of.”

As of press time, Gray hadn’t personally responded publicly to the lawsuit.