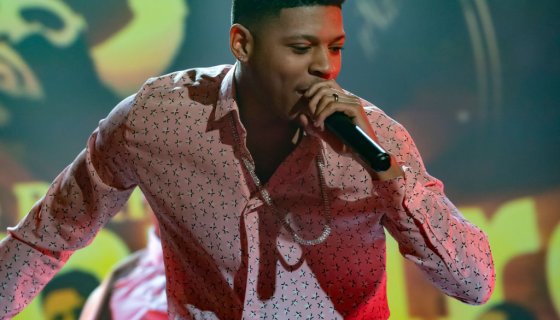 Looks like Empire star found himself on the wrong side of the law.

According to TMZ the man known as Hakeem Lyon to his legion of fans was taken into custody by Arizona police early Monday morning (July 13) for domestic violence. The incident unfolded in Goodyear, right outside of Phoenix where Gray found himself in a standoff with a SWAT team and crisis negotiators after having the cops called on him for allegedly beating “the hell outta his wife.”

Goodyear PD says officers responded to a call to assist a woman at 10:15 PM Sunday night at a Circle K. Police and say the woman flagged down a good Samaritan for help and claimed her husband, Bryshere, assaulted her for several hours at their home.

Police say Bryshere’s wife had numerous visible injuries on her body, and cops say she claimed Bryshere strangled her and she temporarily lost consciousness during the alleged assault.

While Bryshere’s wife was being taken to a nearby hospital, cops say they went to the couple’s home to try to contact the actor, but police say he refused to leave the home and barricaded himself inside.
After a SWAT team and crisis negotiators arrived, cops say the standoff finally ended around 7 AM when Bryshere surrendered to officers in front of his home.

Soon after being booked at Maricopa County jail for his transgressions, Gray was charged with felony aggravated assault (strangulation), misdemeanor assault (domestic violence), and misdemeanor disorderly conduct.His wife was treated for her injuries and released from the hospital. TMZ reached out to Gray’s camp for comment but have yet to get a response to the allegations.–Photo: Gettty