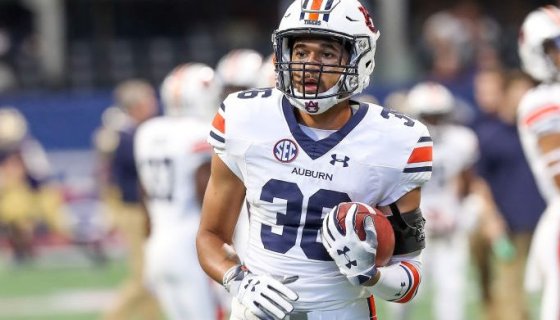 A football player for Eastern Kentucky University has been suspended by the team after a video of the man a police officer to the ground went public. Michael Harris, a redshirt sophomore for the team, lifted the officer into the air and threw down to the ground.

Local outlet WBNS obtained video of Harris, a native of Atlanta, being confronted by Grove City police in Ohio. According to the outlet, police were called to an establishment to remove a man who was reportedly aggressive and possibly intoxicated. Cops arrived to the business and found Harris and attempted to handle the situation when things got dicey.

Harris, who stands 6 feet 3 inches and listed at 240 pounds, easily lifted one of the two officers looking to subdue him and it took a third officer to finally get him in handcuffs and haul him off to jail.

According to the court records as reported by the outlet, Harris faces a felony charge of assault and misdemeanor charges of resisting arrest, obstructing official business, and disorderly conduct while intoxicated.  A statement offered to WBNS illustrated Eastern Kentuck University’s decision to suspend Harris.

“Understanding that details of the incident are still under investigation, and, abiding by FERPA laws and regulations, we must respect the privacy of our students,” EKU the university said in a statement. “When the facts are established, and the investigation complete, Eastern Kentucky University and EKU Athletics will decide how to move forward responsibly.”

The video of Michael Harris body slamming the Grove City police officer can be seen below.