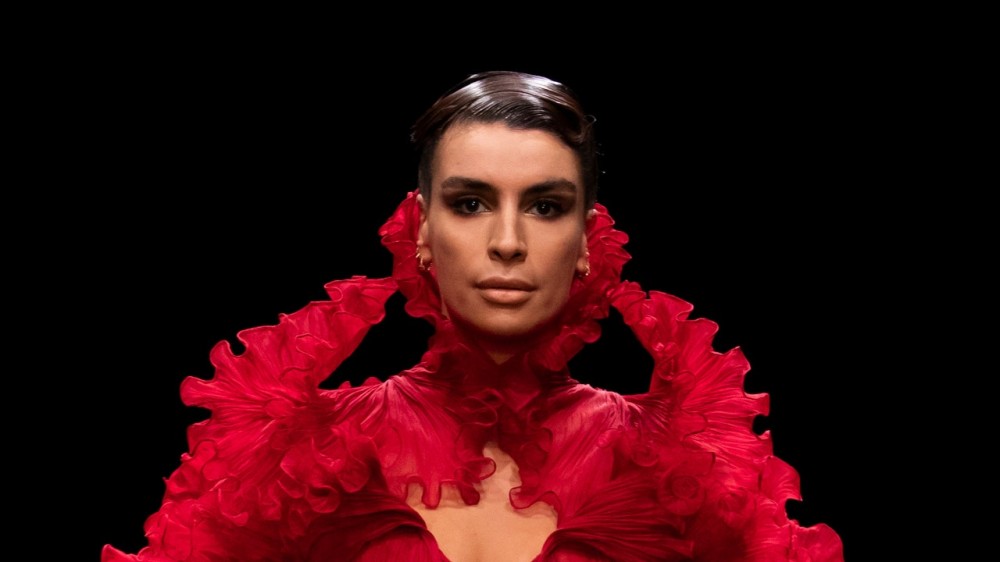 Today, the Dutch-Iranian musician Sevda Alizadeh, whose fans will know her just by “Sevdaliza,” walked for Iris van Herpen’s Spring 2021 Couture show titled “Roots of Rebirth.” Appearing like an otherworldly siren, the musician, known for her exploratory album Shabrang, wore an organza silk maroon-dyed dress. The piece was intricately constructed with hand-pleats “by twisting the roots to entangle the body symmetrically, to then be draped voluminously to sprout outwards in translucency, bloomingly framing the face,” according to van Herpen’s team. As Alizadeh walked, her own hypotonic song “Bluecid” played in the background, making for a surreal, transportive moment.

Alizadeh and van Herpen met through mutual friends a few years ago, and had started bumping into one another, once at an airport in Los Angeles, and then in Paris. Alizadeh, 33, who currently resides in Rotterdam, is known for experimental risks in music. Her sound and the accompanying visuals are ominously addictive, raw, and sensually eerie. The imagery in her music videos is often dreamy, sometimes teetering on dystopian. (With epically sharp cheekbones, Alizadeh makes an unforgettable impression, too.) Like Alizadeh, van Herpen is also known for taking experimental risks in her designs, working with scans of scientific photographs, and collaborating with artists who create kinetic sculptures. Van Herpen is perhaps most well known for her avid use of 3D printing.

This isn’t Alizadeh’s first time walking in a fashion show. She’s appeared on the Y/Project runway, and has collaborated with Marine Serre. Her personal style is certainly transformative, ranging from erotic in her music video “Human” to temptress in “Bluecid.” Her moment on van Herpen’s runway felt especially right as the two share a relationship in pushing boundaries in their work. “I really love the fact that she just brings in all of these elements from nature, to alchemy, to electromagnetic elements. She combines architecture with art, science, and industrial design,” says Alizadeh over the phone from Rotterdam. “She’s so multidisciplinary. I feel like I try to do that as well in my work, so I think I gravitate a lot towards that in her designs.”

While there is not the energy of the typical fashion show due to COVID-19, Alizadeh compared the experience of walking the runway to a movie set. “You don’t know what it will be because they will edit it and add a lot of different layers,” she says. “It is not a typical Iris van Herpen, but for me, it is easy to imagine because I know her shows and I know the magic that she puts into all of the elements in her work.” And while the artist is typically the one performing, she fits seamlessly into the runway with a striking effect. “I feel really comfortable on the runway,” she says. “I think it’s a craft as well to bring energy without having a voice. I don’t feel like a part of me is missing.”