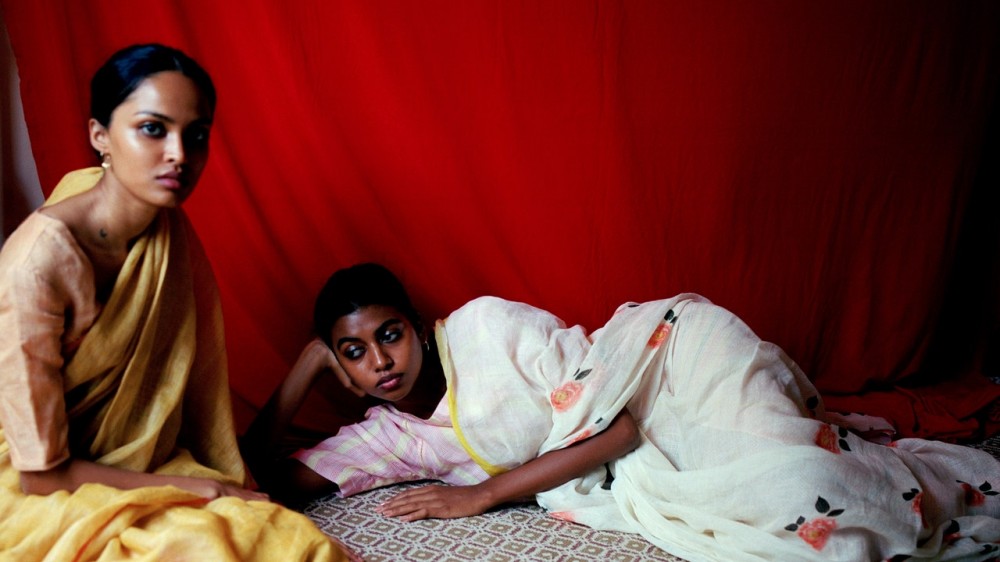 If there’s one thing that unites India’s 1.3 billion people, it is heat. Even in a country with a variety of regional climates—from tropical to Himalayan alpine—hot, sweaty summers are a constant. For centuries, Indians have developed original approaches to enduring such extremes by dressing in breathable, handspun cotton and building low-energy, naturally cooling architecture. But scientists predict that longer, hotter summers and more frequent heat waves could overwhelm the subcontinent. The country has seen a 33.3 degree Fahrenheit rise in temperature since 1901, compounded by severe urban air pollution.

Climate change puts India’s handloom sector in a particularly delicate position, as its age-old khadi and silk weaving crafts are threatened by economic and environmental stress. The Indian textile sector employs more than 40 million weavers, dyers, and tailors; it is the country’s second-largest employer after agriculture and accounts for 60% of textiles imported by the United States and Europe. But as the country struggles to control another wave of COVID-19, the textile industry is facing renewed woes. Many states are re-imposing lockdowns and curfews as the country’s healthcare system strains under a caseload that exceeds last year’s peak in September. Textile workers are among the people most affected by the pandemic; many are migrant workers or live in rural areas with few healthcare facilities, and their lack of proper health insurance or financial stability has never been clearer.

Many designers across the country have dedicated themselves to an innately Indian kind of sustainability: preserving those craftspeople’s livelihoods and skills. Here, Vogue meets the designers behind six labels that showcase the best of Indian design through fashion made with natural, handwoven, and ethically-produced textiles.

Streetwear darling Nor Black Nor White’s best-sellers are billowy, color-saturated dresses that seem to float a few inches off the body. Founders Mriga Kapadiya and Amrit Kumar designed them when they moved from Toronto to Mumbai in 2010 and realized they needed a whole new wardrobe. “Because we were making clothes for ourselves first, we had to consider how we moved in the city in extreme humidity, walking or in rickshaws and trains,” Kapadiya says. “Both Amrit and I like wearing bigger fits than our body size, and we wanted to make clothes we would feel comfortable wearing to navigate Bombay streets.”

NBNW has created a new visual vocabulary that combines edgy athleisure with age-old Indian tie-dye crafts, like bandhani, and weaves, like ikat. A recent collaboration with Fila merged bandhani, diamanté studs, and rainbow motifs with classic sportswear shapes, kicking off the brand’s effort to stimulate the streetwear fashion culture in India. In addition to preserving heritage crafts and techniques, growing their ethically-run, women-owned business is Kapadiya and Kumara’s a top priority.

“Every day I have an existential crisis about putting more products into this world,” Kapadiya says. “But as a small business run by two women, it has taken years for artisans and vendors to take us seriously. We’ve given ourselves a lot of room to work towards using more sustainable materials and natural dyes.”

After working primarily in handmade fabrics like lightweight cotton and silk organza, the duo is turning their attention to bamboo and hemp fibers. “Now our main goal is to focus on the key pieces we know our audience gravitates towards and experiment with those in different fabrics,” Kumar adds.

“You can’t escape climate change when you live in New Delhi,” explains Bodice designer Ruchika Sachdeva. “For almost the entire year, the Air Quality Index is flashing ‘unhealthy’ on our phones.” She works hard to streamline every step of Bodice’s process in light of the deteriorating environmental conditions around her. Sachdeva maintains a tiny inventory and upcycles waste fabric, but still doesn’t call her award-winning label “sustainable.”

“As a designer, it’s my responsibility to know these things, but I don’t talk about [sustainability] so much because it feels like a given,” she says. “Brands don’t advertise that their clothes fit well because it’s so basic. It should be the same with making your clothes consciously.”

Instead, Sachdeva weaves mindful little tricks into her clothes. Her signature architectural pleats, which trail across the sleeves of her blouses and the hems of her dresses, are made with leftover fabric. Typically plissé requires polyester-blend materials, but Sachdeva found a way to use natural fabrics like pure silk and cotton to achieve the same results. She has also experimented with textiles infused with Ayurvedic herbs like neem and aloe vera, which are known for their cooling and anti-microbial properties.

Bodice is rooted in practicality and invention, attributes Sachdeva values dearly. “I’m a woman and I don’t want to sacrifice comfort to look good,” she said. “That’s why I always design my clothes to be comfortable. Why would you do it any other way?”

When Sanjay Garg launched Raw Mango in 2008, the handloom sector in India largely produced somber garments for politicians on the campaign trail. Garg created a new market for luxurious handwoven textiles—many of which were once dying crafts—by transforming them into glamorous Indian occasion wear. He has become a leader of the handmade revival, but is critical of the greenwashing that often equates “handloom” with “sustainability.”

“Embroidery and machines are not the enemies,” he says. “Do I produce using machines? No. But overproducing and overselling handloom [textiles] isn’t sustainable either. If as a country we don’t have enough land to grow wheat or grains, but instead we are growing marigolds in a field that will go on to dye 10 shirts, is that sustainable?”

Garg’s home state of Rajasthan is largely a desert, and the region has shaped the way he thinks about clothes. Many of his collections feature the backless blouses and short brocade lehengas traditionally worn by Rajasthani women. Raw Mango’s garments come in brilliant hues like rani (hot pink), totai (parrot green), and desert orange, often lined with twinkling metallic gota thread.

Garg employs 1,200 bunkars, or weavers, who live in craft clusters throughout Chanderi, Varanasi, and Kutch. “I belong to an old school of thought. I like to produce things where they originate from and where they belong,” he says, explaining why he doesn’t own a centralized factory. Plus, in places with extreme daytime heat, where temperatures can reach 113 degrees Fahrenheit (45 degrees Celsius), the warp of fine cotton and silk can break on the loom. Garg’s weavers work in their homes and are free to weave early in the morning or late at night when it’s cooler.

Despite Raw Mango’s large following, Garg wants the brand to stand for frugality—as espoused by Mahatma Gandhi—not simply “sustainability,” which he considers a recent Western concept. “No one else’s solutions will work for us,” he says. “We have to think from the perspective of our land and indigenous conditions.”

Linen is a famously biodegradable and cooling fabric thanks to the natural properties of flax and the textile’s loose weave. At the height of summer, it feels like pure luxury. But despite the abundance of linen produced in India, Anavila Misra could never find linen saris. Misra produced the country’s first with weavers in West Bengal back in 2011. “Anavila stands for comfort, ease, and elegance. Linen adds all this to the sari,” Misra says. “The textile is comfortable for our climate, and a linen sari falls very elegantly.”

Flax fibers are difficult to weave and tend to break easily, but Misra’s weavers have mastered the art and can add other crafts, like zari (woven gold or silver thread), block printed stripes, appliqués, and hand-painted florals. These hybrid crafts elevate the raw beauty and delicate colors of Anavila’s linen.

After a decade of pioneering the material, Misra has spent the past two years developing saris in a fabric that is even more sustainable and breathable: khadi, a hand-woven, naturally-dyed cotton fabric indigenous to India. “Since consumers can only buy from the choices available to them, I wanted to give them a conscious, sustainable option,” she says. “I wanted to create something which is the need of the hour, but is also beautiful.”

Harago’s menswear designs often include some creative upcycling: A bedspread hand-embroidered by founder and creative director Harsh Agarwal’s mother became a co-ord set, and vintage tablecloths and hand-spun neem-reshmi (a blend of cotton and silk) sari fabrics were made into boxy, short-sleeved shirts. Agarwal’s inventive approach to menswear is rare in a country where the lion’s share of the industry is devoted to womenswear. The 26-year old economics graduate previously worked on sustainability projects with the United Nations and learned about the diversity of Indian textiles by traveling around the country and observing artisans.

“I saw a gap between menswear and craftsmanship,” he explains. “We like to promote the legacy of Indian craftsmanship and our ability to employ artisans as our brand’s step toward sustainability.”

Harago’s shirts, trousers, and outerwear sell globally, but are influenced by traditional Indian garments. The lungi, a draped sarong-like garment worn on the lower body by men in the humid climate of South India, inspired a range of drawstring pants in a checkered, pure cotton fabric. Agarwal’s textile-first approach means the handwoven fabric he finds often dictates what he designs.

Even though Harago is a young brand—it launched in 2018—Agarwal values his sustainable policies over fast growth, prioritizing retailers and customers who appreciate the time and patience it takes to create handmade textiles. “We’re looking for clients who understand the ethos and ethics of the way we make our clothes,” he says.

The pandemic was an awakening of sorts for Eka’s creative director, Rina Singh. “I’ve had the time to stop and look at what we’re doing,” she says. “Can I call Eka a sustainable label even though I was making too much too fast, because I was carried away by the beauty of creating?” This self-reflection led to the launch of Eka Core, a new line of contemporary separates made with handwoven cottons and linens leftover from previous collections.

For this summer, Singh designed dresses in kota doriya fabric, which is made of tiny woven squares that are almost weightless on the body. Singh’s reputation for creating such comfortable, practical wardrobe staples led to a Kurta collection for Uniqlo back in 2019. But even when she’s designing for a global audience, her upbringing in rural Haryana in a family of agriculturists influences her to this day.

“All the women in my family would sit together in the afternoons and hand-spin khadi and make garments. It’s a part of me,” she says. “In India, we have such a beautiful dynamic between our weather conditions, the crops we grow naturally—which is largely cotton—and our artisans. After traveling the world, I’ve realized why [our] local intelligence has such fundamental depth.”

Just like the heirloom Kanjeevaram saris and Kashmiri pashmina shawls she has seen passed down through generations, Singh hopes Eka’s garments will be cherished and preserved.