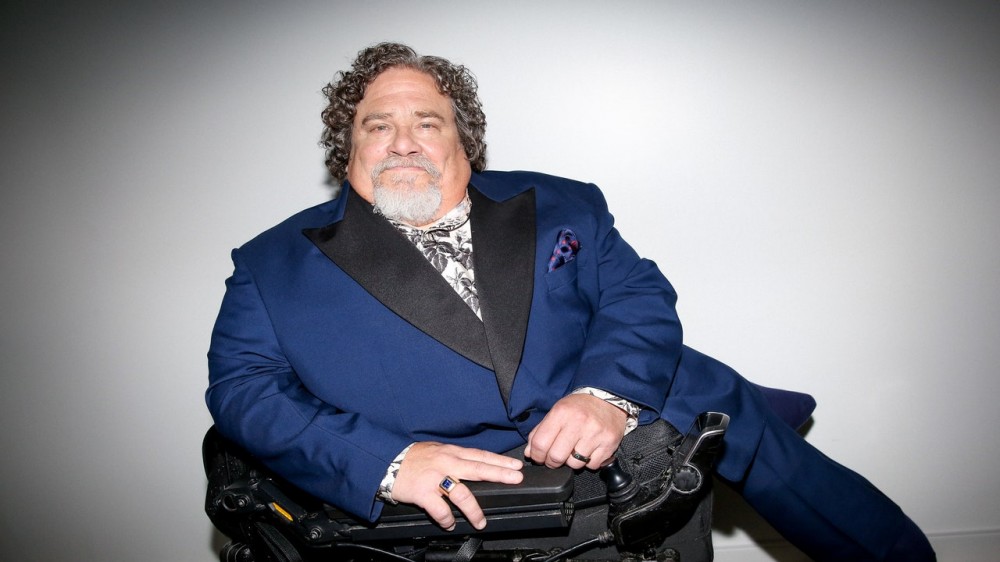 To listen to Sinéad Burke read this profile, press the play button below:

For a Disabled person, the entire world is a stage. You are a protagonist in a narrative that someone else has authored. Clothes are costumes that weren’t designed for you but are altered to fit, and the audience is delighted by, curious about, and sometimes fearful of your presence.

At least, that’s how it used to be. At tonight’s Academy Awards, Jim LeBrecht and Nicole Newnham are nominated for Best Documentary for their Netflix film, Crip Camp. It’s a story that provokes a Disabled gaze, unraveling our community’s journey to disability rights and justice. The documentary follows a group of present-day disability activists who had all been to the same summer camp, Camp Jened, in the 1970s. LeBrecht is the first physically Disabled person to be nominated in this category.

Produced by Higher Ground, the production company led by President Barack and Michelle Obama, the Crip Camp team were keen to leverage the film to amplify conversations and build impact in disability communities around the world. It’s how I became introduced to them. I spent last year partnering with Rowena Neville as advisors for Crip Camp’s International Impact Campaign. We engaged with the U.S. State Department and global corporations to help support grassroots movements.

In our earliest meetings, we found respite from planning and community-building by imagining, ‘What if Crip Camp receives an Oscar nomination…what would we wear?’ It was a conversation we treated as seriously as those about policy and accessibility, because clothes are important, particularly when you are Disabled. For me, clothes can be armor, a protective mechanism that I use to shield myself from being the object of strangers’ attention. But, I also use clothes to translate who I am, and to mediate my personality to the masses. Clothes touch our skin, we have an intimate connection to what we wear, and in most parts of the world, we have a legal obligation to get dressed.

In recent weeks, those imaginings of a nomination became a reality. In thinking about what Jim might wear to the Oscars, we deliberately engaged a luxury fashion house because those who the fashion industry chooses to spotlight have the potential to shape society and transform culture. I have the privilege of sitting on Gucci’s Global Equity Board and co-lead a project that has the strategic ambition of “creating opportunities for Disabled people at Gucci.” Working with Jim and Gucci…that’s quite the opportunity.

With design teams in Rome, me in Dublin, and Jim in L.A., we’ve had lengthy discussions about fabric, education, and garments that are explicitly designed to fit a Disabled person. A red carpet moment on the world’s most celebrated stage can and should ignite a movement.

Below, Jim and I talk about the power of being seen—on one’s own terms.

Sinéad Burke: In this pandemic year, Jim, you have become an Oscar nominee, a historic Oscar nominee. The moment is here, people have watched Crip Camp, people have responded, you have changed lives, created communities, accelerated movements, the Oscars are ahead of us—in a pandemic.

Jim LeBrecht: Well, the extraordinary thing about the Oscars is that it’s going to be in person. I was hoping that it would be, because rolling into a room in a wheelchair is a political statement. If you don’t see us, you don’t think about us. It’s just that simple. So I’m really happy that we’re all going to be gathering in Los Angeles and that I’ll be seen.

Burke: In thinking about disability and representation, this is a historic year for the Oscars. Are we able to move the dial and think about accessibility at an event like this too?

LeBrecht: There’s supposed to be wheelchair access to the stage, but I don’t want this to be a one off. The symbolism of not having something that looks like everybody can get to and be on stage—it’s a harmful message.

Burke: Think of the children and the young people who are watching at home, who are dreaming of a moment in which they may accept an Oscar on stage. If you are visibly or invisibly Disabled, or if you are Deaf, and there’s no sign language interpreter, how can you ever envision that this is a space in which you are welcome?

LeBrecht: No, you can't. We spoke with a filmmaker who said that when he heard that Crip Camp was nominated, he said, that it was incredibly important to him, because previously, he saw the stage as a sign of exclusion. Maybe it is allowed to happen because only 1% of the characters on TV shows or in films have a disability, and of those characters, very few of them are played by people with disabilities.

Burke: Even when they are—being very conscious of the privileges that you and I hold—they are often physically and visibly Disabled characters, and they are white. We need to be intersectional in our focus and in our approach as we push forward in these projects, because it has never been more important to be as reflective of the diversity that exists within our community, across identities than in this moment.

Jim, you said a powerful statement earlier, that was about the importance of being seen. And how the Oscars is going to be a moment in which you, as an individual, but also as an artist will be seen. Talk to me about the process of getting dressed for the Oscars.

Burke: Rooting it in dignity too, because in those moments, I think Disabled people are so used to being observed, whether that’s by the public or by medical practitioners. And in a moment of intimacy, as you said, it’s so important that it’s rooted in respect and agency. So. what will you be wearing? What’s the look?

LeBrecht: The look of love! I’m getting an incredible custom suit made by Gucci. It’s dark blue with black satin lapels and a floral silk shirt—all of which was designed with my disability in mind. There are custom socks and a mask too! Wearing it, I feel elegant, which has never happened before. Usually, in formalwear, I feel like I’m sinking into the clothes, but I look fucking amazing.

Burke: Jim, regardless of if you win or not, what do you want it to mean? For yourself, for the industry, and for the community?

LeBrecht: I want to be seen, I want people to know that I’m there. For people to know that someone with a disability co-created art that is quite a good film. I want to challenge perceptions of Disabled people. Look at Crip Camp, look at Jen Brea’s film Unrest, or Jason de Silva’s film, When I Walk. If you look upon us as just a medical condition and not a community and a culture, you’re standing in our way. You’re standing in our way! Don’t do that. You have an opportunity to really correct some of the incredible stigma that is hurting and killing people.

Burke: Thinking of the person reading or listening to this article, who may be a frequent visitor to [Vogue’s website], or this may be their first time [here], what can that non-Disabled person do to make a difference right now?

LeBrecht: If we asked everybody, what is an accommodation you need? I would say, I need wheelchair access and Half and Half in the refrigerator at all times, because I don’t drink my coffee black. Someone else might say that what would make a big difference is that I can go to my kid’s soccer game every Friday afternoon, because I’m a single dad, and I really need to be there for them. Allowing people to live out in the open and not in fear of stigma is a real start.