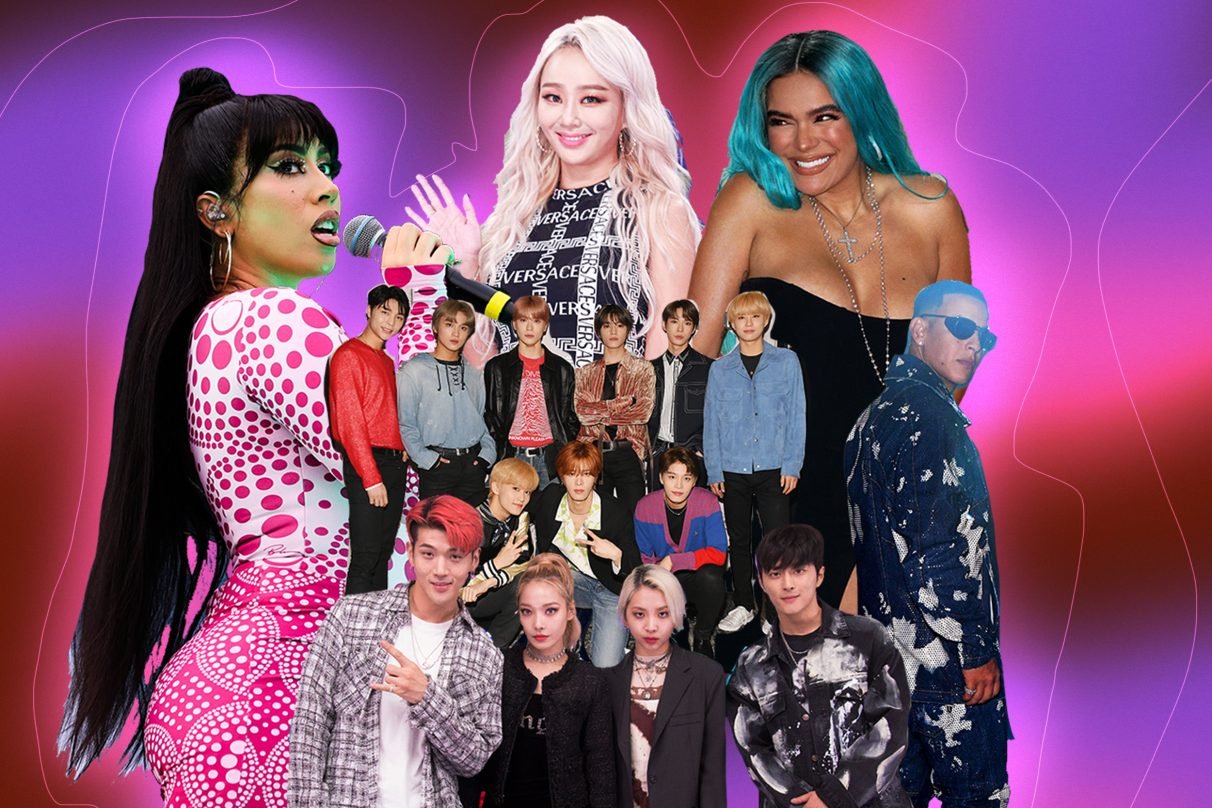 Collaboration tracks are a great way for artists to team up with any notable singer/songwriters, experiment with an appealing genre of interest, and impress their fans with their drive to create something new. It’s an artistic formula that has worked for years to inspire artists to expand their musical knowledge and boost exposure between more than one artist. And with the globalization of music and the rise of international acts, thanks in part to streaming, artists from different parts of the world are starting to come together to collaborate on music even more. Blending numerous musical styles, two musical scenes that have gained real momentum in the anglo market are Latin music and K-pop, which has prompted an inclination for collaborations.

The online communities in Latine music and K-pop have an insatiable desire to bring their favorites together to create multilingual hits that break records across the globe and blow fans away. In recent years, artists in these two industries have come together to work on music that has left a mark with both Latine and K-pop supporters. There’s Super Junior and Reik’s “Otra Vez,” J-Hope of BTS and Becky G’s “Chicken Noodle Soup,” and Chungha and Guayanaa’s “Demente.” Most recently, Ozuna announced that he’ll be featuring BLACKPINK on his upcoming album. In addition to this, there’s also a multitude of Latin song covers by K-pop artists, as well as songs that feature a few Spanish words off their discography that have left fans to remain hopeful of potential collabs. After all, K-pop has had tremendous success throughout Latin America and with the Latine diaspora worldwide.

With artist collaboration ideas becoming a highly-discussed topic all over social media platforms, it leaves one to contemplate, do you have any possible artist collaboration pairings that you’d like to see transpire? Admittedly, a few ambitious pairings come to mind. I mean, who could have predicted Monsta X and Pitbull coming? The possibilities are endless! And because the sky’s the limit at this point, here’s a list of a few dream Latine and K-pop artists that, if paired, could break the internet.

In the time since their respective debuts in the music industry, both Daddy Yankee and the 10-member South Korean unit NCT 127 have dominated the charts with impressive feats and loyal fanbases. Daddy Yankee has been dubbed the “King of Reggaetón” with over two decades worth of infamous party tracks, a long list of honors that have given him monumental success, and paving the way by amplifying the Latine identity in the music industry. With NCT 127 being one of four successful sub-units created from the main group, NCT, it’s no shock to see that they are one of the top boy groups in K-pop. Both of these artists have experimented in various styles that prove they can take on any challenge and achieve significant acclaim and praise. Plus, let’s be honest, who wouldn’t want to see the boys of NCT 127 take on reggaetón with a Latine legend? If you like Daddy Yankee’s “Con Calma” and NCT 127’s “Lemonade,” then you can foresee imminent success with their standout rap and dance skills. Plus! The guys from NCT 127 have already proven they can throw it down with a merengue.

Putting la Bichota herself Karol G and R&B singer HYOLYN on a track together would be a perfect match based on their musicality, style, and devotion as empowering female solo artists. HYOLYN has dabbled in a variety of genres like hip-hop/rap, pop, and R&B/Soul, which attests to her versatility by showcasing her talent from her K-pop roots. Karol G has shown success in genre-hopping between reggaetón, Latin trap, and even sertaneja, proving she’s able to succeed in any genre she experiments with. Aside from their musicality, both women have worked incredibly hard to be where they are today from a young age, despite the criticism they faced for being different from the ordinary. With what fans have seen from HYOLYN’s “Dally” and Karol G’s “SEJODIOTO,” a possible collaboration between these two could easily lead to the next cross-cultural, badass, twerktastic female empowerment anthem for this generation.

Combining the talents of both Kali Uchis and rapper Zico could create an organic and harmonious musical pair. Both of these soloists have explored their talents with their captivating vocals and rap skills in hip-hop. With several titles attached to his name — rapper, singer-songwriter, composer, and producer — Zico is a household name in South Korea that doesn’t shy away from expressing his artistic ability. His successes come from crossing over into several genres in the industry like R&B and hip-hop while keeping his mainstream recognition as a Korean idol. Zico is not just your ordinary artist; he has no limits on the music he wishes to pursue. Uchis’ distinctive range and recent viral popularity have given her the opportunity to create soothing tracks in both English and Spanish. With Uchis’ dreamy R&B and soul vocals and Zico’s expressive lyrics added into the equation, the potential for a harmonious duet similar to Uchis’ “After the Storm” and Zico’s “Pride and Prejudice” could be foreseeable in the near future. After all, they both could create a unique balance of hip-hop and R&B with their expertise.

What can one expect if Colombian singer-songwriter Feid and girl group MAMAMOO potentially collaborated? The short answer is a vocally dominant reggaetón track that’ll leave you in shock. Both of these artists are notorious for experimenting with genres and styles outside their field to showcase their repertoire. The Latin Grammy-nominated singer has had experience working with well-known Latine singers like J Balvin and Sebastian Yatra, and has solidified his versatility with others in the field. But based on his solo album Inter Shibuya – La Mafia, his creative process and artistic vision go beyond the expected by navigating between genres like old-school perreo, edgy trap, and romantic ballads. So there’s no doubt that he could dabble with a strong female presence like MAMAMOO. The female outfit doesn’t shy away from any challenge musically with their discography ranging in Latin pop, ballad, and jazz, to name a few. Aside from their musical curiosity, these women are extremely well-known for their inimitable and captivating melodies, both together and in solo projects. After listening to Feid’s “SI TÚ SUPIERAS” and MAMAMOO’s “Egotistic,” their reggaetón flow and various vocal textures can create a sensual and hype reggaetón pop song.

One thing that J Balvin and co-ed K-pop quartet KARD share in common is creating a variety of addictive dance tracks that are perfect for any party, which if given the opportunity to collaborate, could potentially create a powerful Latine house track. J Balvin has worked with a variety of well-known artists in the industry like Skrillex, Beyoncé, and Dua Lipa, which proves he’s a force to be reckoned with amongst international artists and can cross over into any style with ease. KARD’s success derives from a number of factors since they first came out: their inspiration from international music influences, creating a legacy as a mixed-gender group, and willingness to work hard to continue being undeniably trendy within the K-pop space. Together, these artists could make the next big dance hit for your next social function. If you’ve heard KARD’s “Bomb Bomb” and J Balvin’s “In Da Ghetto,” then it’s certain you’ll see why this would be a great global dance/electronic banger.

Amongst the young and refreshing vocal talents in music, it’s worth considering the idea of bringing María Becerra and singer-songwriter BIBI together on an alt pop/R&B track. A few traits that these women share are their profound raw vocals and chic charm. BIBI’s talents have gained recognition from her self-produced songs on Soundcloud and honest personality on the South Korean competition show The Fan. She’s also open to freewheeling out-of-the-box music that makes her an extraordinary female solo artist. Becerra’s career began on Facebook, later transitioning to YouTube, where she expressed her desire for self-expression in creative forms like monologues, song covers, and vlogs. With Argentinian trap rising in popularity, Becerra is one of the up-and-coming voices in the trap-pop scene that is poised to be the next big star with her promising and creative discography and collabs within the Latine scene. After listening and watching the music videos for Becerra’s “Mi Debilidad” and BIBI’s “Life is a Bi…,” it’s clear they can create an intellectual track with in-depth social themes with their impactful lyrics and storytelling.

With the significant and rising popularity of the corridos tumbados sound, it could be a challenge to see who in the K-pop world could take on a music style with strong cultural roots. However, there is one South Korean rapper that could appreciate the eye for innovation that characterizes the genre and experiments with it: DAWN. He has songwriting abilities and takes on styles of music that not many are willing to test out as a solo artist. Pairing DAWN with Cuban singer-songwriter Ovi would easily be the best match to create a corridos tumbados and hip-hop track to blow your mind. Even though Ovi is still new in the music industry, the on-the-rise star has high potential with his soaring vocals and versatility. Taking tracks like Ovi’s “Cuando Toca Toca” and DAWN’s “MONEY” can guarantee potential success amongst these emerging artists.

There’s something about combining the artistic abilities of pop princess Danna Paola and Korean-American warrior AleXa that could create something one-of-a-kind. AleXa’s discography and song covers show her potential to test her skills outside of K-pop, especially after fans praised her performance of her well-received cover of Karol G’s “Tusa.” She can even sing in three different languages, which makes her more than qualified to hop into a collaboration with an artist like Danna. Danna’s experience in a variety of acting and music projects in the span of two decades makes her both a desirable and creative artist to work with. She’s competent in vocal experience in television and movie soundtracks and the first Spanish-language production for the Broadway musical, Wicked. Both AleXa and Danna have strong suits in choreography and, if given the opportunity, would give Danna the chance to prove she can keep up with the K-pop girls. Can you imagine the dynamic dance duo these two could make together? Fans would die to see them absolutely kill it together! Aside from their artistic abilities, they both have a unique sense of style in their music videos that changes with the specific storyline/theme of their songs. Listening to both AleXa’s “Kitty Run” and Danna Paola’s “Friend De Semana” will give you an idea of the potential they could have with their unique sounds.