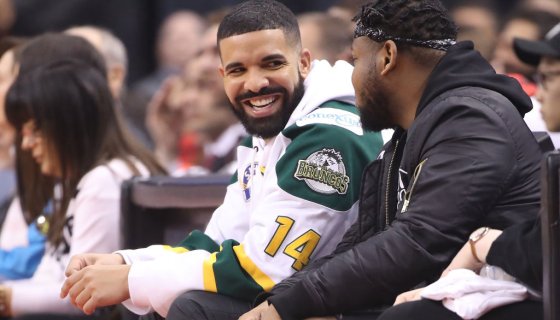 Caffeine just landed another prominent rapper for an exclusive show, and it’s none other than the 6 God himself Drake.

The broadcast network announced today (Feb.11) that it inked a multi-year live-streaming deal with Drizzy. As part of the agreement, Caffeine will live-stream and co-produce rap battles in conjunction with URL (Ultimate Rap League), the world’s largest Battle Rap platform. This is right on par for Drake, who famously touted on an episode of the Paul Rivera  talk show, The Shop, which stars LeBron James  that he “studied rap battles for a living.”

In the press release for the announce, Drake, called the deal a “perfect match” stating:

“I’ve always loved URL and admired what Smack and his team have been able to create, it just wasn’t easily accessible. It’s exciting to be in a position where I’m able to bring Caffeine to the table and help provide URL with the tools they need to elevate the viewing experience and make it more accessible to fans.“

“We are proud to partner with Drake and support him as he brings his vision and channel to life. As a platform, Caffeine gives Drake the freedom to pursue new creative ideas, and we are excited about the whole slate of fresh content that he will share with his communities. It will all be live, authentic, and amazing, and I can’t wait for fans to come check it out.”

No premiere date has been revealed, but when we do finally get those details, we will gladly let y’all know. You can watch the teaser trailer for the new Caffeine Battle Rap show below.