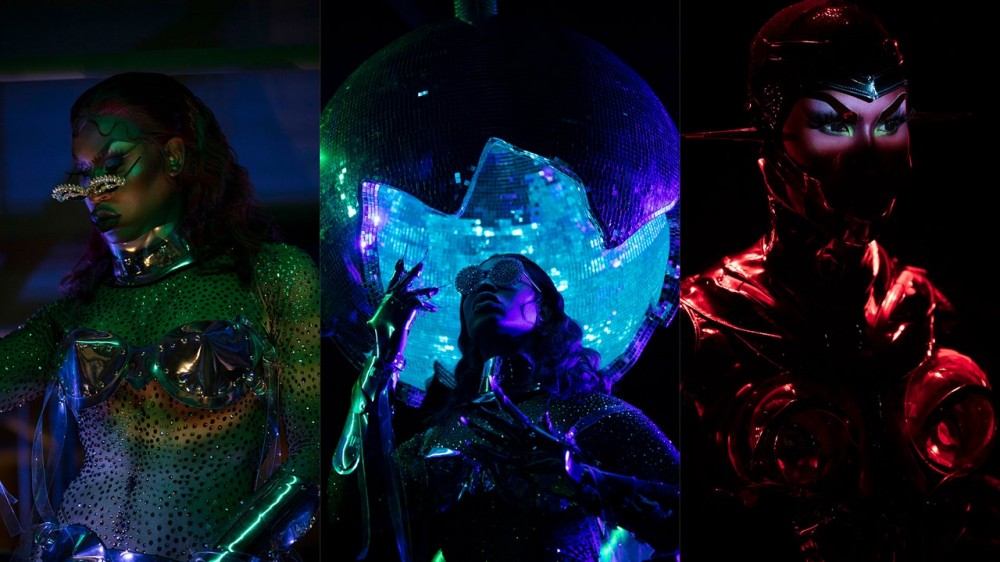 One of Shea Couleé’s most memorable moments on RuPaul’s Drag Race: All Stars 5 (which she won, by the way) was when the drag superstar did a pole dance routine set to her and singer-songwriter Gess’s moody song, “Collide,” featuring Mykki Blanco. Because it was a fan-favorite moment, the drag superstar knew that she would eventually have to make a full-on music video for the track—and that moment is now. Today, Couleé is releasing the official video for “Collide” on her OnlyFans page, a platform where subscribers have to pay to get access to exclusive content. If you’re not an OnlyFans user, however, you’re in luck: Couleé gave Vogue a closer look at the new video’s futuristic fashions.

OnlyFans has become popular recently with stars such as Cardi B, and queens such as Couleé, Katya, and Plastique Tiara—but prior to this, it was a platform predominantly used by sex workers. For her video, Couleé wanted to pay tribute to those who pioneered the platform. “People tend to view OnlyFans content creators as sex workers,” says Couleé. “I was approached to help diversify the platform, but I also wanted to give credit to the sex workers that have been working so hard to help build this platform to where it is now.” Couleé did so by fusing a technological look with a more vampy finish. “I wanted to create a fantasy about digital sex robots," she says. "It’s kind of Metropolis meets Westworld." Given that we’re all living in a digital world now, via endless Zoom calls and what not, Couleé also wanted to live out her full cyber fantasy in the process. “I wanted to push the boundaries of what we expect from drag queen music videos,” says Couleé.

To achieve the futuristic vibe she was going for, Couleé collaborated with a few designers to transform herself into a high-fashion robot. The first look was a black, red, and silver chrome bodysuit made by Chicago-based designer Joshuan Aponte. “It’s a very Thierry Mugler-inspired suit, with LED lights that run throughout it,” says Couleé. “The lights generate from the core of the suit, almost as if there’s this heartbeat. Star Wars and C-3P0 was a huge inspiration.” Other looks in the video include an armored piece by designer Sho Konishi, as well as a red, Barbarella-inspired outfit with a pointed cone bra by the sculptural designer Jeffrey Kelly. “I paired it with a floor-length braid, which was so much fun to dance with,” says Couleé.

To really take the idea of fabulous virtual reality even further, Couleé commissioned a 3-D avatar version of herself for the video, and her digital, black latex ensemble was crafted by the artist and illustrator Jed Mikolaites. “I was like, let’s try all the dimensions,” says Couleé. She also worked with her close collaborator Tiger Lily to make all the pieces for her backup dancers. “We made these makeshift cyborg helmets out of mirrored masks, and funnels and disco balls from the dollar store,” Couleé says. “They actually turned out super cute—balling on the budget!” The star says creating these custom pieces is something that comes with drag territory. “Even prior to Drag Race, I would always be making things for myself,” she says.

Couleé also brought back a major outfit from her time on Drag Race, by reviving the nude, crystal-embellished catsuit she wore for the show’s “Love the Skin You’re In” challenge (which went viral on her Instagram and cemented her as a drag superstar, no less). “There's this moment where my character in the video becomes more human and less android, so we go from this Mugler-esque suit to this wet, sparkly, nude goddess,” says Couleé. But even though she’s reviving this look, she says her drag style has evolved and grown a lot since her time on the show. “My drag style is always evolving,” Couleé says. “I just tried out prosthetics for the first time and I'm obsessed with them. Being home more than ever now, the possibilities are endless. Anybody can jump in front of a green screen and put any kind of background. We can be whatever we want. The fantasy is whatever you want it to be.”