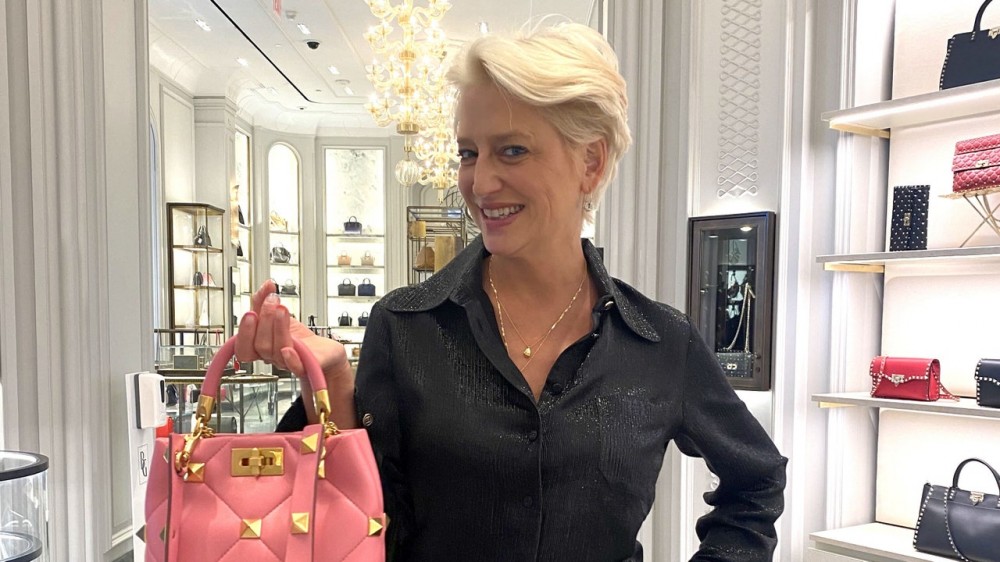 Welcome to Shopping With Vogue, a series in which we sift through a fashion lover’s favorite store. For this edition, we shop for accessories at Bergdorf Goodman with the former star of The Real Housewives of New York and now author of Make It Nice, Dorinda Medley, a.k.a @dorindamedley.

Dorinda Medley doesn’t go to therapy; instead, she says, “I go to Bergdorfs.” Of course, she would say something like this. Those one-liners made Medley a breakout star on The Real Housewives of New York. Her biting wit made her the perfect character for the catty, Champagne-funneling franchise, which she was on for six seasons.

But Medley is different, clothingwise, from the rest of the cast. Don’t get her wrong, she likes those tight-fitting pieces from Alaïa and Hervé Leger as much as the rest of them, but she’s also known to wear traffic-stopping Missoni prints or a fully crocheted look by Ashish. Her outré style sense has helped her transcend the bitchy banter of the Housewives planet and become a cult-beloved fashion plate. For those who don’t know (Medley loves to tell people), she owned a cashmere company in London during the ’90s, and Princess Diana shopped there.

I’ve always been interested in how reality-television people dress, especially someone like Medley. We decided to meet at her self-help HQ, Bergdorf Goodman on 57th Street. Medley struts through the revolving doors with her hair coiffed in her signature short ‘do (“We all have our signature,” she says) and her nails with rainbow tips (“Pride!”). Medley is wearing a pair of Cushnie et Ochs high-waist pants and a black turtleneck. She is an Upper East Side vision, accompanied by the well-connected publicist Tim Cush. He doesn’t work for Medley; according to Cush, he’s simply a friend who helps her.

Medley comes to Bergdorfs once a week. “You have to see what’s coming in, and people know me, so they will put things aside,” says Medley. She’ll text the sales associates too. “There’s a secret society at Bergdorfs. It’s not about how much money you have, it’s about who you know.” Noted.

To start, we hang out by the Valentino accessory section to chat about reemergence outfits. Medley has some thoughts on this. “We’ve been dressing in sweats and flats for a year. I mean, we haven’t seen a button for a year,” she says. “I’m ready [for reemergence] but not like 100%. I’ll wear a ripped jean with a Valentino shirt and a kitten heel.” Kitten because she can’t wear anything too high. “My arch has dropped. There is an article out right now that across America, especially with older women, arches dropped during the pandemic. These are women who have been wearing heels their whole life! I’ve been wearing heels since I moved to New York,” she says, “I used to be a size 40, but now I’m 41.” She’s going to a podiatrist to solve the problem later this week. I point to her a very tall Yves Saint Laurent shoe. “It has a platform!” quips Medley. Case closed.

We mosey on over to the Tom Ford section, where Medley has her eye on an embroidered bag. It’s a bit pricey, so Medley waxes poetic from afar. She says the piece reminds her of nature and her second home, Blue Stone Manor in the Berkshires of Massachusetts, which is only a few miles away from where she grew up. When she was younger, she was a waitress at Friendly’s and won best waitress dozens of times. Medley had always dreamed of owning Blue Stone Manor, which her mason grandfather and great-grandfather built. In 2005 her late husband Richard bought it for her. She will talk about her rags-to-riches upbringing in the Massachusetts boonies in her book Make It Nice, which will be released August 17. “It’s all in there,” she says. Until then? Back to that coveted Tom Ford bag: “It’s very coming out of COVID and back to nature,” says Medley. “I’m liking this Berkshires bohemian look.”

While we are walking, I see that everyone knows her. It’s like Cheers but make it Bergdorfs. At the Chanel section, we meet the sales associate Mirka, who Medley has known for about four years. “Everything about her is loyal,” says Mirka about Medley. “I also pick the most beautiful clients. They are the easiest to dress.” The feeling is mutual.

At the Chanel counter, Medley tries on a pair of Chanel biker gloves embroidered with pearls that reminds me of Madonna from the ’80s during her Like a Virgin–era days. Medley, like any classic Upper East Side lady, has a lot of Chanel. As Medley explains, her collection is not about accumulating, it’s about using what you have. “I think we’re all rediscovering clothes again,” says Medley. “Like, I went back to my apartment after a year almost. And it was like a museum. I’m like, Who owns all of this? And they were mine! Instead of buying all kinds of new stuff this year, I find myself buying things that elevate my old stuff.”

We head to the clothing section, where she tries on an array of Paco Rabanne and Valentino. Despite our time in the clothing section, Medley reiterates that she still loves a bag. She recalls her first handbag, a modest Dooney & Bourke leather handbag that she wore with a navy blue suit. For her, the moment was a stepping-stone in her career, and she felt that the bag gave her an air that commanded respect. It’s a philosophy that follows her into her wardrobe today. “I love a good handbag. It becomes like a pet. It’s like you have it forever. I keep my handbags for years and revisit them,” says Medley. “A handbag can change everything. I think a great handbag is a great investment for a woman. It gets you respect. You can wear ripped jeans and a T-shirt, but if you have a great bag,” Medley explains, “it means you have your essentials down. If you have a good bag and good shoes, you have it together. You understand the essentials.” Welcome to Dorinda 101.