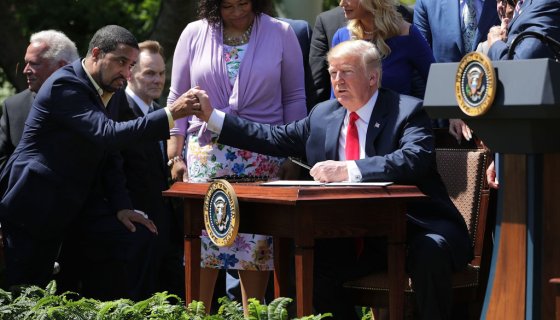 The depths that the campaign team for will sink to know no limits, especially in the wake of reports of a tactic being used to sway Black voters. Black surrogates and proponents for the former business mogul have hosted cash giveaways at rallies praising Trump and teetering on the line of breaking certain laws.

Politico is reporting that a rally held in Trump’s name last month in Cleveland featured a cash giveaway for participants to the tune of several hundred dollars in some instances. The raffle-styled giveaway was framed by organizers as a show of support for President Trump while handing out cash that numbered into the tens of thousands of dollars reportedly.

The outlet adds that a second giveaway was scheduled for Virginia but has been put on hold although similar rallies are planned. The rallies are framed as a touring effort, standing in support of the Trump campaign’s own reelection efforts to gain support from Black voters. The charity that runs this roaming tour, the Urban Revitalization Coalition, is headed by Brian Pumper (don’t Google at work or in public) lookalike and avid Trump supporter, Darrell Scott.

The organizers claim that the touring rallies are legal and have a goal of sharing information or how to revitalize inner cities with a focus on economics. URC is listed as a 501(c)3 charitable organization but it appears that there are some shadowy implications on how that status is applied according to a former IRS employee.

“Charities are required to spend their money on charitable and educational activities,” Marcus Owens said to Politico, who once worked as a former director of the Exempt Organizations Division at the Internal Revenue Service.

Owens, who currently practices law privately at Loeb & Loeb, added, “It’s not immediately clear to me how simply giving money away to people at an event is a charitable act.”

Making this especially interesting and also suspect is that the Scott and the URC are not directly connected to Trump’s campaign efforts, at least on paper. Yet, Scott, who declined to tell the publication who the private donors that are supplying the cash for the giveaways, has aligned himself with Trump at several lengths.