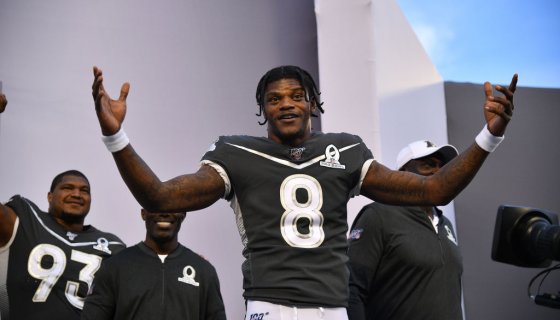 This definitely wasn’t in EA’s playbook when it comes to revealing the next cover athlete for Madden NFL 21.

Landing on the cover of the premier NFL football video game is both an honor for players and a curse in some cases. Baltimore Ravens star quarterback, Lamar Jackson broke the news that he unlocked that achievement of grabbing the cover and achieving a life long dream in a video posted on the Ravens’ Twitter account.

“It’s always been a dream of mine since I was a kid since I first started playing Madden.”

"It's a dream come true." @Lj_era8 on Madden cover: pic.twitter.com/FtNibi7xt4

That’s dope, but there is one problem, he wasn’t supposed to drop that information yet. Typically there is a massive rollout when revealing their cover athletes. EA confirmed that Jackson announcing he was on the cover of Madden NFL 21 was a slip of the tongue in a rather hilarious tweet.

When the @Ravens leak your Cover Athlete…😑 pic.twitter.com/qO5I90YxNE

Well, this pretty much describes how 2020 is going.

As for the “Madden curse,” last year’s unanimous MVP isn’t worried about it one bit pointing to last year’s cover athlete Patrick Mahomes’ triumphant year and winning a Super Bowl.

In terms of his selection for the prestigious honor, EA couldn’t have made a better decision. Jackson had himself a superb season breaking the NFL record for most rushing yards for a quarterback. He was also the second player in NFL history to win the MVP award unanimously. Tampa Bay Buccaneers QB, , was the first player to do so. Damn saying  Tom Brady and Tampa Bay in the same sentence is still weird.

His fantastic season hit a snag in the playoffs, but he did manage to break more records becoming the more than 300 yards and rush for more than 100 yards in a playoff game. But some fans did blame the Ravens’ loss on another curse not related to Madden, the dreaded .

Well, big congrats to Lamar for landing the cover, and also we wish him and the Baltimore Ravens good luck when the NFL returns.