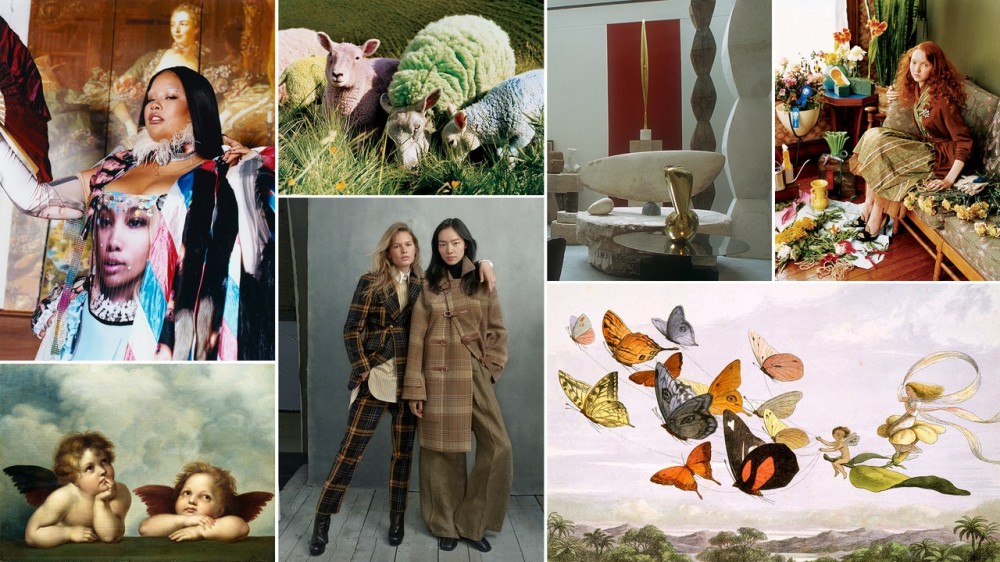 On occasion, I’ll take a look in my closet, my apartment, and my social media accounts and wonder, what does all this add up to? Is there any throughline between the Bed Bath and Beyond beige plates, the Hermès champignons scarf I tracked down on eBay, the nun-shaped candle on my desk, and the crispy oven mitt printed with a 1950s housewife saying “I’ve got a knife”? Is there any visual connection between the table I found on Facebook marketplace and the IKEA Billy bookshelves present in many millennial households? (Mine are painted in Benjamin Moore’s Alligator Alley green). What I’m asking in these moments is, in internet parlance, what is my aesthetic? I’m wondering if I have successfully arranged my life to adhere to some cohesive vision. If I look too long, anxiety sets in. Maybe the answer is no?

I’m suddenly aware of just how many hyper-specific aesthetics with handy, catchy names already exist on the internet. Overtime, “aesthetic” has evolved from an academic word and something utilized by artists and auteurs to something to categorize our own identities by. It can mean both personal style and a vague stand-in for beauty. Aimlessly scrolling on Pinterest a few months ago, I was prompted that I may also enjoy looking at “frat boy aesthetic.” How could that not pique my interest? Frat boy aesthetic turned out to be a scroll of red solo cups, beer pong, irreverent Americana, and, darkly, more than a few photos of people passed out with sharpie on their face.

Pinterest then promoted even more: random aesthetic, aesthetic images, ethereal aesthetic, aesthetic photos, delicate aesthetic, royalty aesthetic, anglecore aesthetic. When I went to search just “aesthetic,” the nonsensical search term “aesthetic girl” popped up. The results are, as you may expect, pretty, thin women ran through a VSCO filter. Pinterest says that there has been a growing interest in aesthetics since 2018, with a “large spike of 60% in searches for simply “core aesthetic” as Pinners discovered different types of aesthetics to shape their identity,” last February. It implies an element of rigor, an ability to control the entire image the way you only can in a painting, a movie, or on social media. You are the master of your canvas, making every decision like Wes Anderson is lining up his shots to get perfect symmetry, a perfectly cohesive color palette. Merely having a sense of style seems so prosaic; wouldn’t you rather an aesthetic?

On TikTok, it’s easy to find “what aesthetic are you?” videos. The opening cut reads, “Ask your best friend which is you.” They flash quickly through photos that tend to follow the same categories. 1. A bucolic field, children with loose curls running around in linen dresses, a goat, a breakfast nook filled with Victoria sponge and jam jars (this is known as cottagecore) 2. A gothic library, pleated skirts, dark hair fastened with a bow, leather bound books, a chess board (Dark Academia) 3. Versailles, blooming roses, pink tulle dresses (royalty aesthetic) 4. Red and white mushroom caps, water lilies, pinched profiles, iridescent wings (fairycore).

The goal implicit in these videos is to live in such a way that all your visuals align and can be clearly described and pinpointed. “Your life is Light Academia” read a comment on a Russian ballerina’s “Day in My Life” TikTok, which showed her alternating between classical dance class and art history notes, with a pause for an apple in between. It’s not limited to Gen-Z. This modern usage has been used on Tumblr at least since the early 2010s. Since then, it’s just become how we talk about visual phenomena encompassing more than just fashion. Rachel Tashijan, a writer for GQ and author of the newsletter Opulent Tips, which champions eclectic, trendless personal taste, wrote in a recent missive, “Close your eyes and you will probably see a ‘cool aesthetic’—which is anathema to cool.” Later, she clarified to me that the “cool aesthetic” she was talking about was the milky pink Instagram visuals utilized by millennial companies to advertise everything from office space to scrubs to erectile dysfunction medication.

It’s similar to how we now talk about individuals as having a personal brand, whether you’re famous or not. Gretchen McCollough, a linguist and author of Because Internet: Understanding the New Rules of Language explained to me over the phone, “When you talk about someone having a personal brand or their brand is strong, you’re getting the metaphor from marketing and branding. Whereas when you talk about someone having an aesthetic or that is or isn't ‘my aesthetic’ then you're getting your metaphor from the world of art.” And on the internet, we do have as much control as an artist to create something so specific and consistent. And many of us have.

The first definition of aesthetic comes from the 1700s, meaning, “the science of sensory perception.” Over time, the definition became more about the appreciation of beauty, where “aesthetic” could be a stand in for visually appealing. In Anne of Green Gables, Anne describes her mother figure Marilla as someone “whose aesthetic sense was not noticeably developed,” for not appreciating the way Anne had decorated her room. “You get this sense of ‘okay, Anne of Green Gables is someone who could be into cottagecore,’” McCollough said.

On Tumblr, users would build their blogs around a particular theme, whether it was cottagecore or a collage of images representing a character from a TV show. These niches have blossomed and expanded. One Tumblr user, who goes by Fairypage, took notice of just how many aesthetics were being defined online, and decided to make the AestheticsWiki. The sheer volume of entries is impressive. You’ll find a long, long list of visual subgroups, what the key elements are, and what someone who fits into this aesthetic would wear. Some are old school—Art Deco is listed along with preppy—others are products of the internet, like e-girls and bubblegum bitch (think: a Bratz doll in marabou feathers).

Fairypage, who is a student in the United Kingdom named Ella, is no longer involved with the Wiki. But she’s no less interested in the visual language of art and internet, and even has her own definition for what an aesthetic is: The stylistically consistent multimodal manifestation of an imagined lifeworld. In other words, “Something is an aesthetic if you can look at an image [or song] and say ‘yeah that belongs there.’” It’s an interesting project, to categorize niche visual cues into endless subcategories. Some of the discussion questions on the Aesthetics Wiki are something along the lines of “I like Doc Martens, Ariana Grande, and anime. What’s my aesthetic?” An impulse I recognize wholly. Ella notes that many of the Wiki’s users are young, and that there’s some conflation between having a consistent aesthetic and a collection of things that are nice to look at, even if they don’t add up. “There are lots of people with a consistent personal style, but they don’t find it by looking through a list of personal styles and picking one. It’s the things that stick through all my reading, the films I watch. If I have [an aesthetic], I want to control it.”

And what is personal style if not just an unnamed aesthetic. In my conversation with Tashijan, she said she thought of aesthetics in two ways. One was the aforementioned Instagram millennial aesthetic, a kind of “photoshopped, buffed basic” resplendent with succulents and pastel pinks and greens. The other is what I think those looking for their style on the AestheticsWiki, and myself staring around my apartment searching for continuity are aspiring to. “It is maybe the more classical sense, which is people who have a very finely tuned appearance and lifestyle that work together as what I would frankly describe as a total work of art,” she says, citing the poet Rachel Rabbit White and her Elizabeth Taylor-ian style as an example, as well as playwright Jeremy O. Harris and his “exuberant, early to mid ’70s glamour.” “Someone who has a really defined aesthetic, it’s someone who has a lot of taste,” she says. “Jeremy and Rachel are examples of people who are always watching movies and reading books and who seem to be discovering new things all the time. But there are also people who are doing that who don’t necessarily have an aesthetic. [Jeremy and Rachel’s] outward appearance is very connected to their interior lives.”

Would she count herself as having a defined aesthetic? “It’s hard because I feel like it’s changing. I would describe it as ’80s SoHo gallerist mixed with ’70s fake British socialite, sort of a scammy one, not a real one,” she says, before asking me if I have one. At the time, I told her I had only become more confused while writing this piece. Though after several more hours of pondering, I got a little bit closer. I liked this idea of finding something so specific, burrowing really deep and adding layer upon layer. It feels like choosing a movie in which to inhabit, rather a goal to aspire to. A personal aesthetic doesn’t have to be a super defined, pre-existing concept like Light Academia. It doesn’t even have to be true.

For this exercise, I sat in my apartment and looked around. My white, wide leg jeans and chunky black belt with a gold buckle and black muscle tee feels very classically American. A little Katharine Hepburn, but let’s put her in Texas, as my ever-present cowboy boots suggest. But I like an element of whimsy, something blobby, like the nun candle or the earrings I wear that I think look like little Brancusis. Flashes of Texan socialite Lynn Wyatt and Marilyn Monroe in The Misfits pinned themselves to my mental moodboard, along with both Hollywood Hepburns (particularly Audrey in Two for the Road), Phoebe Philo’s Céline, Tina Chow in a white, cutout dress, Elsa Peretti at her desk smoking a cigarette with oversized glasses, the elegance of her bone cuffs, Prada’s ’90s cowhide mini skirts, and Tracee Ellis Ross’s madcap devotion to dramatic shapes. Thinking about how these clothes made me feel, rather than any tangible connective tissue, the phrase “wayward West Texas art collector” popped up. I don’t know, what would you call it?

My own aesthetic moodboard.