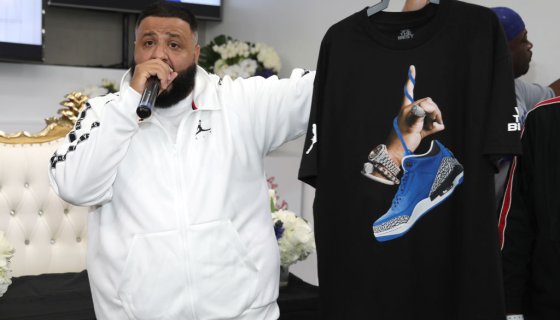 ‘s sneaker collection is probably top 3 in the game thanks to his connects to Jordan Brand, Kanye West, and, well, that’s all you need these days really.

So naturally the “We The Best” DJ/producer/Weight Watchers spokesperson took to his IG page to show his followers a sneak peak of what Jordan Brand has in store for the 2020 summer and it’s heat for real. During what Khaled said was a “meeting” in progress, the Miami mogul took a walk around the room and showed the “Metallic” pack Air Jordan IV’s which come in all-white with either purple, red or orange metallic accents on the lace guards on the base.

STILL IN THE MEETING! But the meeting will be at home 🏡 ! 🔑 by yourself @wethebestmusic @jumpman23 JUST GOT MAIL

Aside from the 4’s, you can see that Jordan Brand is also dropping some all-white Air Jordan 1 Lows, the Air Jordan XIII “Flints,” and “Animal Pack” Air Jordan III’s amongst others.

While these joints are sure to be seen all over the place come the summer (if we’re able to go outside by then anyway), rumors have begun to swirl that Jordan Brand is planning on releasing the Air Jordan III “Kobe”‘s with the purple and yellow colorway over an all-black and cement base. Those would be the hottest release of the year should it prove to be true. Fingers crossed.

Are you interested in picking up anything you saw in Khaled’s IG video? Let us know in the comments below.