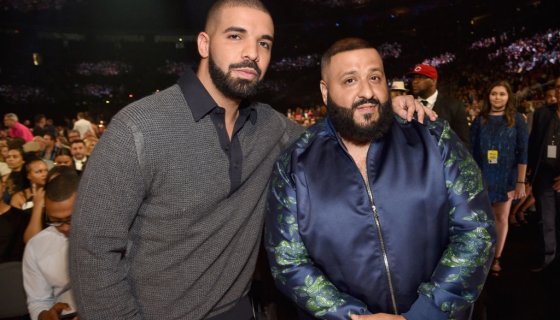 The summer is a dub thanks to , but that didn’t stop for linking up with his favorite collaborated Drake on not ONE, but TWO tracks.

It’s no secret, DJ Khaled and rarely miss when they link up songs. Summer is currently on ice, but Khaled isn’t letting a global pandemic stop him from delivering “anthems.” Honestly, if things were normal, you can count on both singles “Popstar” and “Greece” ringing off at your favorite day party.

The two songs which will live on Khaled’s forthcoming 12th studio album Khaled Khaled are clearly the LP’s standout tracks. On “Popstar,” Drake, of course, takes the lead on the song while Khaled makes his presence felt with his famous adlibs rapping about the life of popstar. On the track the Canadian artist raps:

I’m a popstar, but this shit ain’t bubblegum, yeah. You would probably think my manager is Scooter Braun, yeah.
But my manager with twenty hoes in Buddakan, yeah, say. Look, Ariana, Selena, my Visa. It can take as many charges as it needs to, my girl. That shit platinum, just like all of my releases, my girl. Niggas come for me, I tear them all to pieces, my girl.

On the second Drizzy, Khaled collaboration, “Greece” which happens to be a song that has “leaked” online already, Drake envisions a trip to the Mediterranean location while “crooning” in a very familiar tone:

“Come with me, leave all of your things, yeah. We can stop at Gucci, stop at Louis V, yeah. Come with me, fly you out to Greece. Full speed, survoler Paris.”

Honestly, if Drake’s name wasn’t attached, we would have assumed that it was singing on the song. Music Twitter has already pointed that out.

Anyway, you can peep the reactions to the Khaled’s new Drake infused records below.

2. We know A&R Bron is going to be vibing to both tracks.

The Weeknd when he listens to Greece DJ Khaled ft Drake pic.twitter.com/XG8Z6Xnz3f

drake coming back to claim the summer on greece and popstar pic.twitter.com/yAbSwMfo73

DJ Khaled and Drake casually droppin’ two anthems for us to blast this summer pic.twitter.com/7njr6tJiyS

Listening to Drake on Greece vs Popstar pic.twitter.com/rGYx2XxxDL

if drake is giving songs as good as greece & popstar to khaled as throwaways, just IMAGINE how great the album must be 🤯🤯🤯