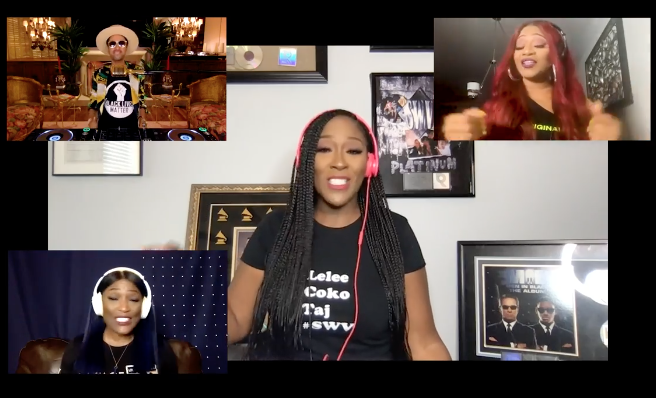 DJ Cassidy is back with the third installment of his live performance series “Pass The Mic” of 80’s and 90’s Hip-Hop and R&B’s legends doing a virtual house party concert. The mix is amazing to witness as it is seamless in flow, as over 40 hit-making stars like, SWV, After 7, TLC, Keith Sweat Full Force and so many more perform their biggest tracks from the comfort of their homes.

With this being number three in the series (where the first volume showcased the 70s/80s, and the second featured damn near every Hip-Hop icon from the golden era of 88-92), this version mainly salutes the New Jack Swing era of the early 90s. Cassidy keeps the party moving by the perfect song selection, while the likes of Father MC, Christopher Williams and En Vogue sang their hearts out.

Having these icons in his digital mix gave way to Cassidy thinking on the times when he saw some of his participants on the covers of our magazine. Read his thoughts below and check the amazing show he and these incredible talents put on for the people of the world!

JODECI “COME AND TALK TO ME”

“Written and produced By Devante Swing and Al B. Sure, ‘Come And Talk To Me’ defined the beginning of a new era of R&B that went to be referred to by many as Hip Hop Soul, and Jodeci was at the forefront of that movement. There’s a reason Jodeci graced the cover of Vibe. They were a cultural shift. The EPMD interpolation, the voices, the sound, the style. With Andre Harrell and Puff Daddy behind the scenes, this song changed the game.”

“Everyone has those few songs that they always put on when cruising in the car on a sunny day. ‘Baby, Baby, Baby,’ is one of those songs for me. It’s instant sunshine, it’s instant breeze, it’s instant smiles. Everytime I hear it, I picture myself in the music video which I remember watching as a child, enamored by the scene, wanting to deejay a vibe like that when I grew up. The feeling this song gave me then is the same feeling it gives me today. LA and Babyface’s production defines the phrase ‘feel good.’ Chilli’s adlibs are as memorable as T-Boz’s hook. TLC has a long list of iconic records, yet this one holds a special place in my heart.”

“The Motown ‘Who’s Lovin’ You’ acapella intro, the James Brown ‘The Payback’ sample, the bassline, the harmonies…This song might be one of the coolest records ever made. The track itself can go head to head with the greatest Hip Hop instrumentals of all time. Mix that with the most flawless harmonic voices, this song will always be in a category of its own.

“Bobby Brown’s ‘Don’t Be Cruel’ is one the greatest R&B albums ever made and, with ‘Thriller,’ is one of my two favorite R&B albums of the decade. It’s sold over twelve million copies. ‘My Prerogative’ is the definitive Bobby Brown anthem, in many ways, similar to what ‘Billie Jean’ is to Michael Jackson. It’s so cool, it’s so mean, it’s funky. Produced by Teddy Riley, it’s also one the definitive songs of this era in which the energy of Hip Hop transformed R&B. Thirty-two years later, this song remains a dance floor monster, instantly explosive on dance floors around the world, no matter where I am, no matter who’s in front of me. ‘My Prerogative’ transcends New Jack Swing, it transcends R&B, it transcends genre. It’s one of the greatest Pop records ever made.”

NEW EDITION “IF IT ISN’T LOVE”

Three years from now, New Edition’s debut single ‘Candy Girl’ will have been released forty years ago. They are simply the greatest R&B group of the past four decades. Their cultural influence – from music to dance to style – is immeasurable. Not only does the group itself have countless hits, but each of the group’s six members are stars in their own right. Bobby Brown, Ralph Tresvant, Johnny Gill, and Ricky Bell, Michael Bivins, and Ronnie Devoe of Bell Biv Devoe have all released undisputed smashes, and each does something special on Pass The Mic: VolumeThree. With this edition (pun intended) of Pass The Mic, I focussed on the game changing R&B of roughly 1987 to 1992, a time period in which there is no more iconic New Edition record than ‘If It Isn’t Love,’ produced by Jimmy Jam & Terry Lewis. Everyone knows the choreography (and its influence – check Beyonce’s ‘Love On Top’) and watching people on dance floors around the world break into it the second they hear it is a beautiful thing. Even Puffy, Usher, Jay Z, and Beyonce all had circles around them when I dropped it at Puffy’s 50th birthday last December.”