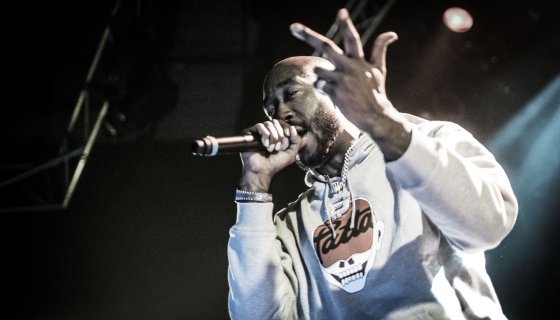 While we will never wish violence upon , it’s a wonder he hasn’t gotten his head flown at least once in his media career. After oddly caping for Jeezy after threw some shots towards his former CTE label head, Skinny Suge and Ak got into an explosive Twitter beef that’s continuing to escalate.

On Monday (June 29), the feud began when a clip circulated by way of DJ First Class on Twitter featuring an excerpt of Akademiks speaking with his Everday Struggle co-hosts. In the exchange, Ak framed Jeezy as a relevant act while stating that Gibbs is irrelevant, coming to this assessment over record sales.

Wayno and Nadeska Alexis tried to talk their mans off the album sales ledge, but Ak was defiant in his stance. The trio’s conversation was sparked by Gibbs’ recent interview with Bootleg Kev for the host’s podcast. Gibbs both praised Jeezy, and also said that he’d beat the Atlanta rapper off the hands if it came to that.

Of course, Ak’s words made it to Gibbs’ doorstep, prompting him to tweet, “I’ll give a bad bitch 5k if they admit to sleeping with @Akademiks” and it was off to the races from that point.

Ak immediately countered with, “Bring all ur statements of how much you made as a rapper.. and I’ll bring up tax statements of what I made as a BLOGGER. and lets compare. U can’t compare to Jeezy…he been lit for mad years. U a lil nigga. and i Doubt u compare 2 me. But… Drop ur shit… I’m down. Mr Gibbs.”

The back and forth went on for a bit, then moved to Ak’s favorite medium of Twitch where he got even spicier than he was being on the timeline. Gibbs effectively shrugged off Ak’s jabs and comments over his bank account and then went for the jugular after unearthing a disgusting tweet featuring Akademiks lusting over a Bhad Bhabie, who was just 15 at the time.

Akademiks hasn’t answered for the questionable tweet, opting to go back to his usual schtick of trolling and hyping up Hip-Hop releases. We didn’t view his Twitch stream from Monday night, so we’re unaware if Gibbs joined in or even cared to respond after dispatching of Ak rather easily with a barrage of insults.

On Twitter, however, Ak is still getting fried heavily by fans and Gibbs alike as of this morning (June 30. We’ve got those reactions listed out below.

How Did Y’all Let @Akademiks Get Famous Bro 😅😅😅 pic.twitter.com/RqZvkO3uZP

Freddie Gibbs got Akademiks at the house like “ No HE’s the irrelevant one! “ pic.twitter.com/uHISiEQx3s

Ok 10 bands if a bitch fuck @Akademiks he need it right now 😂 pic.twitter.com/qzjvzcRtfi

The fact that I woke up to @FreddieGibbs absolutely destroying @Akademiks…. it’s gonna be a good day folks

@Akademiks hey bitch this U? pic.twitter.com/27oi0iFDMt

This Akademiks and Freddie Gibbs beef is the funniest shit i’ve seen in a while bro 💀💀 pic.twitter.com/0jwNK6ylDt

Found a book for you @Akademiks.

And Imma squeeze yo titties on camera. https://t.co/5RLl1MOqp6