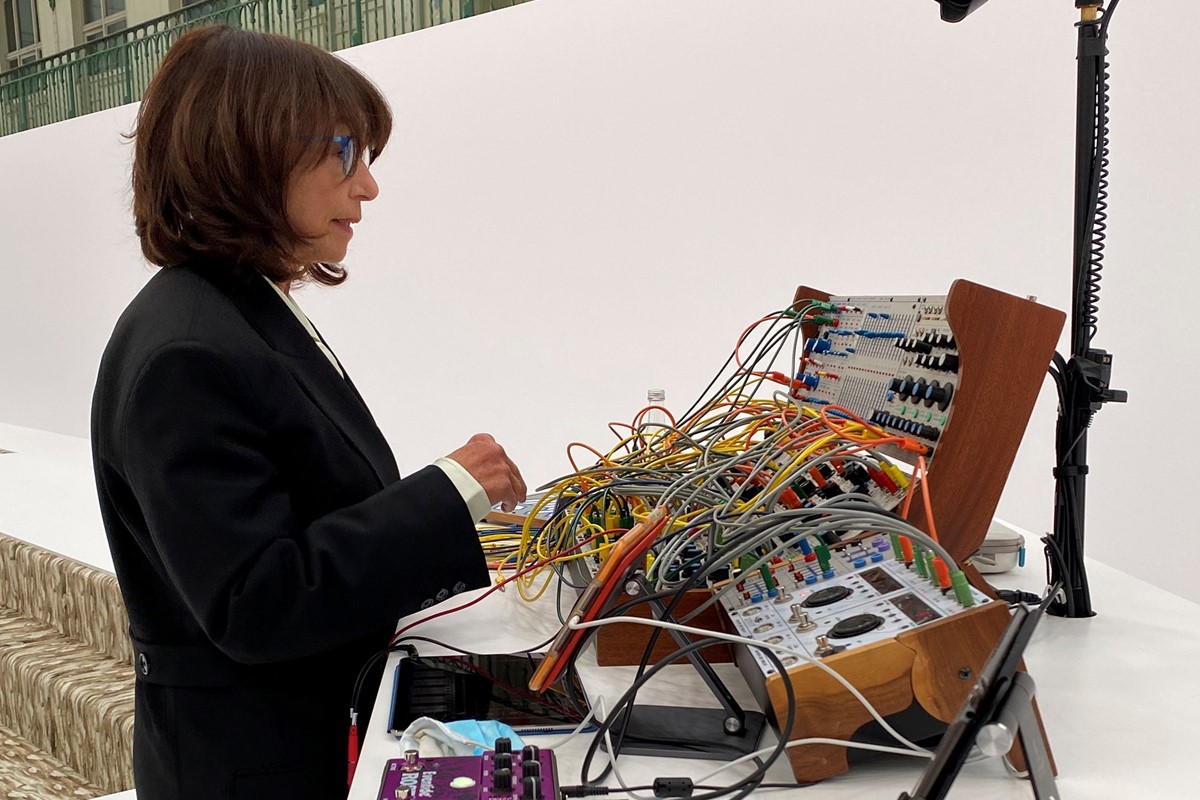 The legendary electronic musician talks early musical memories, getting in ‘the zone’, and her desert island discs

Until last Wednesday afternoon, Suzanne Ciani had never played a fashion show. The legendary musician is used to packing out gig venues around the world, but the AW22 Acne runway presentation marked the first time she provided a soundtrack for a cast of models stomping down the runway.

Turns out, it was a lesson in restraint: “It was a challenge to keep the dynamics steady,” she tells me, as we arrange ourselves in two mid-century chairs tucked away in a room backstage. “In a longer composition, you’d usually make some changes to the bass and treble, (but with the runway show) they don’t like dynamic range. I couldn’t go quiet and then loud. They want it loud all the time.”

In case you’re not familiar with Ciani, a brief history. A classically trained musician, she is famed for her compositions on the Buchla modular synthesiser, and pioneered the rise of electronic music in the 1970s alongside the likes of Daphne Oram and Delia Derbyshire. She’s been nominated for no less than five Grammys, soundtracked a selection of cult movies, and is also the mastermind behind one of the most fanous moments in the history of advertising: that original, satisfying pop and hiss of a freshly cracked Coca-Cola bottle was all down to her.

Despite the extensive accolades she’s racked up across the course of the last five decades, like Oram and Derbyshire, Ciani has not always been given the flowers she deserves. In 2018, she became one of the subjects of Lisa Rovner’s must-watch documentary Sisters with Transistors, which aimed to shine light on these brilliant female trailblazers. In fact, it was an interview with Rovner, in a recent edition of Acne Paper, that led Jonny Johannson and his team to invite her to play at this season’s show.

And so, in the middle of a stark white set flanked by brown-carpeted, 70s-style conversation pits where guests sat, Ciani cranked up her Buchla and got to work. Beginning as she always does with soft sounds of crashing waves, the musician artfully twiddled the knobs and wires of the instrument’s colourful spider’s web of wires, as models paced up and down the catwalk in pieces from the new collection.

On the line-up for the new season was an edit of self-referential looks, as Johannson delved into the archives for inspiration and looked back to where it all began: with denim. Though the Swedish label has come a long, long way from its days peddling cult jeans, the material remains its core, with AW22’s offering heavy throughout. Upcycled offcuts were spliced and diced together to become paper-bag waisted skirts, uber wide-legged trousers, and oversized trench coats punctuated by panels of leather.

Elsewhere, sheets of lustrous satin in faded pastel hues of pink and periwinkle blue were fashioned into floor-sweeping evening gowns and finished with dramatic fringed hems, while quilted eiderdowns that looked like they’d been fished out of your granny’s attic became hulking, protective overcoats that were cinched at the waist like dressing gowns – with looks further cosy-fied by the addition of gem-encrusted wool socks pulled up over the knee.

Suzanne herself gave the collection a rave review, admitting that the label’s clothes were enough to coax her out of her signature skinny jeans and into a louche, black suit with wide shoulders and relaxed pants. Here, she talks more about working with Acne Studios, getting into the creative ‘zone’, and her desert island discs.

Hey Suzanne! First of all, I would love to know how this collaboration with Acne came about. How did you end up soundtracking the show?

Suzanne Ciani: So there was an interview with Sisters with Transistors director Lisa Rovner in an issue of Acne Paper a while back and it went from there. She made this film about women pioneers in electronic music, uncovering historic information about the women who were invisible at the time, like Daphne Oram. Did you see it?

I did, it was amazing!

Suzanne Ciani: Well, I’m one of two living female composers in that film Everybody else is dead. It’s just me and Laurie Spiegel. So we’re a rare commodity (laughs).

Suzanne Ciani: It’s fascinating to see this world, and especially Paris because Paris is fashion. To see the seriousness, professionalism, dedication. The passion for fashion! I feel like I’m in the DNA origin of where it all began. It’s been wonderful, and actually a real learning experience: creating something rhythmic on the spot for these 45 models to walk to.

How did you get into the zone ahead of creating the music for the show? Did you have a brief, of some description, for example?

Suzanne Ciani: I watched one of their shows, I think from last spring, and took the music out of that and watched the pacing of the models. I found that it varies – it might be every 10 seconds, every 12 seconds, 13 or 15 seconds even. I thought the runway would be much shorter, but the space is actually huge, so it was also a challenge to keep the dynamics steady – in a longer composition, you’d usually like to do some changes with the bass and treble, but they don’t like dynamic range. It was kind of hard to shape the music in that way. I couldn’t go quiet and then loud. They want it loud all the time.

More generally, how do you get in ‘the zone’ when it comes to making music?

Suzanne Ciani: You know, the thing is just to be in the moment because it’s an improvisation. You have the starting points and the materials that you’re going to be improvising on, but what you’re doing is completely spontaneous. One constant is the ocean. I always start with the waves.

What was the first musical instrument you ever picked up, and how did you fall in love with making music?

When do you feel most inspired?

Suzanne Ciani: I can be inspired with the little flick of a light switch, you know? It’s really a matter of focus. If I cut out distraction and focus myself then I go into that bubble.

How has your music changed from when you were living in New York, to now, when you’re living in California?

Suzanne Ciani: When I first came to New York, I came as a Buchla performer. In the 20 years that I was there, things shifted because technology shifted. My Buchla broke, it was stolen.  Electronic instruments became midi instruments. So I went from a more abstract approach to music to one that was different – my first album, Seven Waves, was a synthesis of classical music with electronic music.  I stayed in that mode, then I dropped the electronics when I moved to California. I really became totally about the piano and toured as a pianist.

Do you work best in the daytime or at night?

Suzanne Ciani: Night. I’m just a night person, and all my energy comes then. But if I don’t sleep, then I’m in trouble. So it’s this battle between sleeping so that you can wake up fresh the next day or working through the night. It’s always a battle.

You’ve reworked and reimagined a lot of music across your career. Do you perhaps have a favourite piece of music, or one that you’d love to reinterpret that you haven’t yet?

Suzanne Ciani: I’ve always been very influenced by classical music. When I was young, I listened to Rachmaninoff and the Romantic composers like Chopin. I was in love with Bach. Those are the ones that I have reinterpreted. If you look at my compositions, I have a piece based on Rossini, a piece based on Beethoven – all those composers were part of my vocabulary from a young age, and really fed me. So even in the abstract of electronics, there’s an underpinning and consciousness of pitch and traditional music.

What are you listening to at the moment?

Suzanne Ciani: I mean, I’m very boring. I tend to listen to Handel’s Messiah on repeat. I love classical music. There is some contemporary music that I love. A lot of what I listen to is women electronic composers, like Caterina Barbieri and Lisa Bella Donna. She plays the modular, she’s pretty powerful. She has a wonderful sensibility with the machine. I listen to the music people send me. I’ve just done a collaboration with a French composer, Jonathan Fitoussi. Over the pandemic we sent files back and forth, and I met him because he played the Buchla.

Suzanne Ciani: He actually sent me a little video of him playing the Buchla and I thought ‘Wow, okay a fellow Buchlist’. Then he sent me some of his music and I loved his refined sense of composition. Things evolve over time. I came to Paris and when I would come I’d say hello and have dinner with him and his family, which has happened a couple of times. It’s been a surprising and lovely collaboration.

If you were stuck on a desert island, what three records would you want to have with you?

Suzanne Ciani: Bach’s “Goldberg Variations”, the first recording. Avalon by Roxy Music. Those are my favourites, I really only have two. The third might be – gosh, I don’t know what the third would be really. A lot of things, even though I love them, I don’t want to hear them over and over again.

You had a hard time getting people to come around to your music back in the day, because you were so far ahead of your time. If you could go back and give yourself a piece of advice, what would it be?

Suzanne Ciani: Be patient. In 50 years, you’ll be…

Isabella Burley [creative editor, Acne Studios]: [shouts from across the room] An icon!