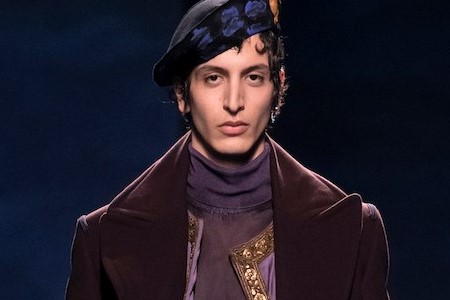 With a little less than a week until he debuts his first ever collection for Fendi, it goes without saying Kim Jones has a busy few days on his hands. Before he could turn his attention to that, however, the designer had a show for a little(!) label called Dior to tick off his to-do list. Taking place on the Paris Fashion Week schedule this afternoon, we’ve broken down everything you need to know about the presentation – just in case your invite got lost in the mail.

…sob, remember them? One after the other, models made their way down a deep blue, luxuriously-carpeted catwalk under the shadow of a series of wooden sculptures that resembled enormous speakers (oh, to be in a dimly lit basement bar standing next to one of those this Friday night). In the background was a vast, swirling artwork – which brings us to our next point.

THERE WAS A COLLAB WITH PETER DOIG

Jones is renowned for joining forces with countless boundary-pushing artists throughout his career, and AW21 was no different. After linking up with Kenny Scharf and Amoako Boafo in recent seasons, this time around, the designer enlisted Scottish-born, Trinidad-based painter Peter Doig to contribute to his latest offering.

As well as providing the backdrop for the show, Doig was also behind the swirling motifs that swam throughout the collection – as seen across clean overcoats, understated tailoring, and more. According to Jones, it wasn’t simply about taking Doig’s work and plastering it across the clothes – instead, he encouraged the YBA to get involved in the process, sending him off to work with milliner Stephen Jones on a series of hats that finished many of the looks.

THE COLLECTION WAS INSPIRED BY ‘CEREMONY’

Inspired by ‘the ceremony of the everyday’ – although we’re guessing not everyday right now, given none of the pieces really lend themselves to lounging – the collection remixed and reworked traditional military styles. With structured brocade and jacquard coats finished with neat buttons in the shape of stars, neatly panelled tailoring, fluffy faux-fur coats, and luxurious silk-rendered camo windbreaker and combat sets all on the line-up, further Doig flourishes came by way of mohair sweaters bearing abstract lions and likenesses of Christian Dior’s beloved dog Bobby, as well as untucked, semi-diaphanous shirts detailed with painterly splatters. The palette was rich and optimistic – with gold, lavender, and cornflower blue clashing with egg-yolk yellow, deep red, and inky navy.

…and we mean, what’s not to love? Longtime collaborator Stephen Jones was once again behind Dior’s AW21 headwear, with fluffy knitted mohair and crocheted beanies, leather helmets, bowler hats, and yet more berets – that we’d beg, borrow, or steal to get our hands on – all on the agenda for the new season. Elsewhere, heavy duty military-esque and wellington boots, silk scarves bearing Doig’s brushstrokes, and new iterations of the house’s iconic Saddle bag rounded off looks. Watch the show for yourself in the video above, and head here for more on what’s going on at PFW.