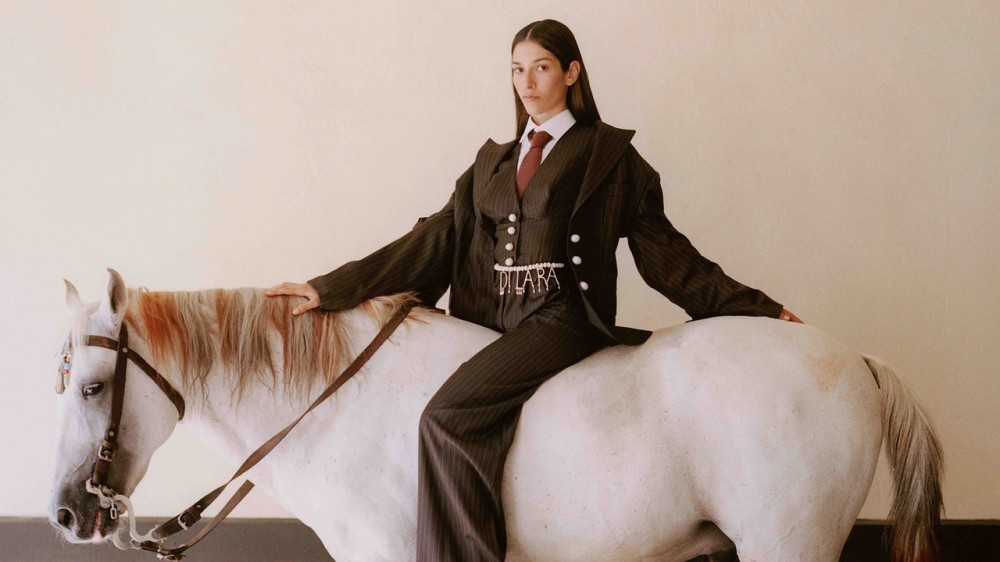 Over the past few days, followers of Dilara Findikoglu might have noticed the cult London designer posting a series of mysterious documents to Instagram, all speaking of a new age of female authority. On Monday came a newspaper front page, its headline boldly reading: Rise! Dilara invades Mesopotamia. (Written underneath: “The land belongs to matriarchal power once again.”) Yesterday, the Turkish-born designer shared a straight-up manifesto, serving as a call to arms for a new legion of sisters to join her in this crusade. “This is the rising call of matriarchal power,” she wrote. “The day has come.”

Whether it’s her richly embroidered blood red corsets that hark back to medieval queens, the crucifixes, pentacles, and Hamsa hands that hang as goddess-like bejeweled embellishments, or Lily McMenamy dancing as a modern-day Salome at one of her theatrical presentations, Findikoglu has always used subversive, politically-minded women from past and present as a starting point. But with the new short film and photo series this manifesto was introducing, Findikoglu is weaving a story of female empowerment that hits closer to home—and one firmly rooted in the present day.

“There’s a really high rate of brutal female murders in Turkey, particularly over the past five or ten years, which I only started hearing about properly when I was back here during lockdown,” Findikoglu explains. “It’s mostly husbands or boyfriends that these women are trying to break up with. The government doesn't really do anything about it, to be honest with you, and these men end up getting away with it.”

For Findikoglu, reading more about these alarming rates of femicide in her home country led to some intense soul-searching. “I really felt strongly that I had to do try and do something about it, but my first thought was, I’m a fashion designer, what can I do? I’m not a politician, I’m not a lawyer, but I have a voice,” she adds. “I wanted to do something really positive to set against all these things that are happening to women here, and do it in my own way and in my own language rather than try for something that’s outside of my abilities.”

The images were created in collaboration with photographer Olgaç Bozalp and Findikoglu’s long-time stylist Ellie Grace Cumming, and feature a range of Turkish women the trio cast both in Istanbul and the eastern province of Mardin that they traveled to for the shoot. Here, they visited sites including Göbekli Tepe, an archaeological site that was only properly excavated in the 1990s and is believed to be the world’s oldest temple, predating Stonehenge by around six millennia. “I had never really been to the east of Turkey before this shoot, but it has a very feminine energy, and lots of old goddesses and female characters from mythology like Medusa and Cybele were all born in those lands,” Findikoglu explains. “It’s a land of women, even if it doesn’t feel like that anymore, so I wanted to awaken those spirits.”

It’s an appropriate new chapter for a designer whose work has long traded in the iconography of pagan matriarchal religions and the occult, expressing her inclusive understanding of feminism through clothes that take classically feminine tropes and lend them a dangerous edge. (In an infamous piece of Findikoglu lore, her 2017 show in a London church somehow caught the attention of alt-right InfoWars host Alex Jones, who described it as a “Satanist orgy,” an attempt to smear the designer that ended up feeling more like an unintentional compliment.) Here, Findikoglu found herself inspired by the tale of Shahmaran, a local legend of a woman who was half-human and half-snake, and who appears as a local folk painting above one of Findikoglu’s models, here dressed as a kind of Mesopotamian Joan of Arc. “If you put a picture of Shahmaran in your house, it protects you,” Findikoglu explains. “It’s almost like an evil eye.”

The true backbone of the project, however, was Finidkoglu’s wish to challenge the rigid gender norms that still exist within Turkish society. “We shot the image of a woman riding a horse in a type of local cafe which is common in Turkey, where men go and play backgammon and drink tea during the day, and women aren't allowed to enter,” Findikoglu remembers. “We shot in one of those cafes with the men still sitting there, and the girl entered on her horse wearing a suit—it was quite amazing to see that happen.” Another image, meanwhile, features a bride flanked by two grooms: while polygamy was officially outlawed in Turkey back in the ’60s, the practice continues in the southeastern regions Findikoglu visited for the project, where female refugees from Syria are driven into these illegal marriages due to poverty and displacement. “That there are still conversations around how many women can a man marry here is crazy to me,” Findikoglu adds. “Like, come on, it’s 2020.”

Findikoglu is keen to point out, though, that the project is not meant simply as a forceful rebuttal of the social values that still exist within more conservative corners of her home country, but also as something positive: as a vision of a gender-equal society that once existed across the ancient lands of the Anatolian peninsula, and that she hopes will rise again. “I’m angry about these inequalities, and I hate the things that are happening to women here, but I’m telling this story because I love Turkey so much,” she adds. “I feel like this project was the first step into a more sociopolitical world; even though I’ve talked about those things in my collections in London, I think doing it here, where that brutality is around you, it’s very different. It feels even more powerful.”