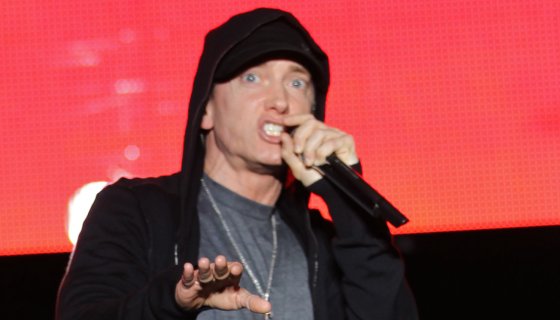 Eminem might have barked up the wrong tree. A newly surfaced track finds the Angry Blonde calling out Diddy’s network but the staff wants all the smoke.

On Monday, June 22 an . On the track Eminen takes some pointed shots at the Revolt TV. “Yeah, shout to Puffy Combs, but f*** REVOLT / y’all are like a fucked up remote / now I get it why our button’s broke / cause you pressing the heat but do nothing though / especially when it comes to punch this throne” he rapped. Naturally the diss went viral and made it to the desk of the employees forcing them to respond in similar fashion.

As spotted on HipHopDX the network kept the same energy by simply saying “F*** YOU TOO EMINEM – REVOLT”. The clap back was shared throughout the brand’s social platforms. In addition to the F bomb he was also tagged on all the posts so he knows they are standing ten toes down on the statement.

Now back to our movement. ✊🏿

While Marshall has yet to divulge the nature of these verbal put downs it seems things to link back to his seemingly never ending riff with Joe Budden. Joey’s State Of The Culture show airs on Revolt TV and the New Jersey MC has been critical of Em’s albums. To complicate things Budden released an album through Shady Records while he was a member of Slaughter House.

has yet to respond to the Revolt TV.