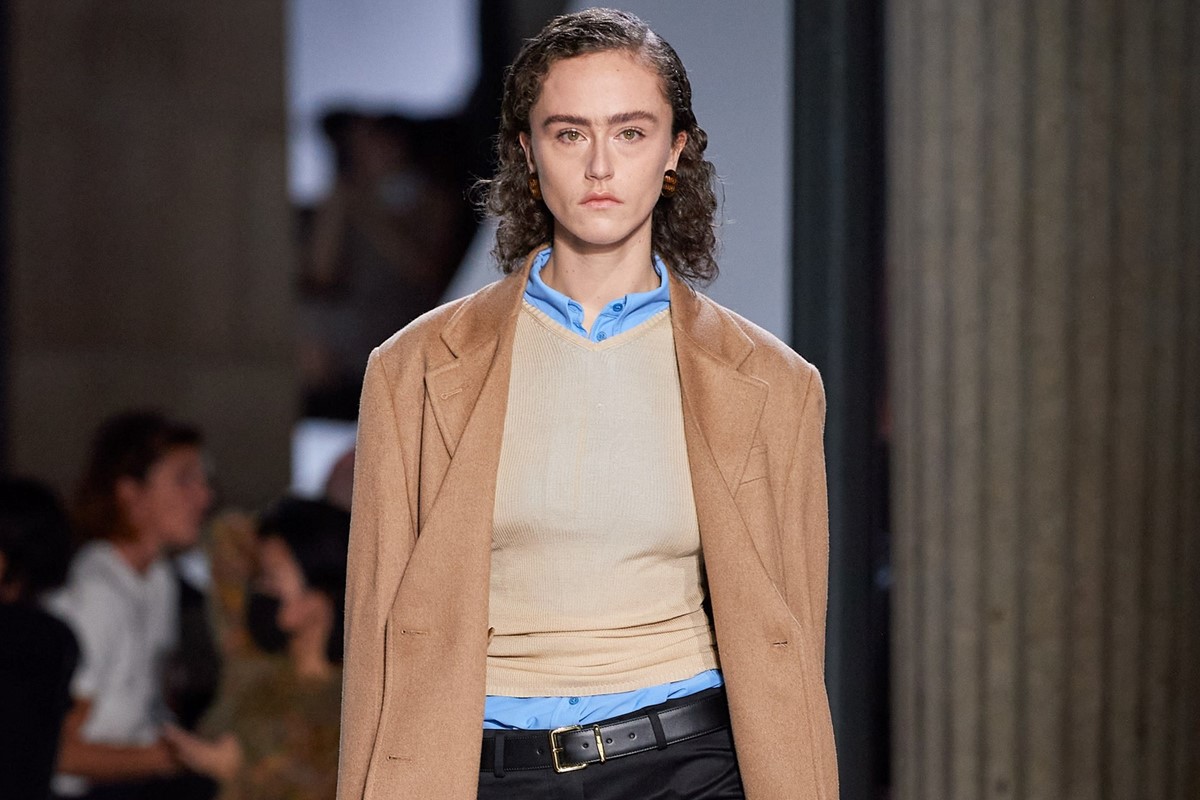 The second daughter stepped onto Miuccia’s SS22 runway, as the designer sent out a sexed-up takedown of Upper East Siders everywhere

From the moment Ella Emhoff stepped out at Joe Biden’s inauguration ceremony in a jewel-encrusted Miu Miu coat, it’s been kind of inevitable that the former fashion student and rising model would step onto Mrs P’s runway at some point. After all, Prada’s little sister has a long history of incubating the industry’s freshest future talents (just look at Lila Moss, Iris Law and Bella Hadid). Unlike Lila however, this wasn’t Emhoff’s runway debut, having already walked for Proenza Schouler and Balenciaga – including this season’s “red carpet” show. That being said, scoring a Miu Miu gig is a pretty monumental moment for any bright young thing.

Co-directed by Moroccan artist Meriem Bennani, Miu Miu’s SS22 show was spliced with office-based skits and fake audience members, who recoiled, leered, and jeered as Miuccia reinstated (at least some of) the label’s menswear – by way of sturdy beige slacks, shrunken t-shirts, and frayed trench coats. Just as Prada has always found a coquettish younger sister in Miu Miu, so too had it a playful younger brother, before its men’s line shuttered in 2008. Over a decade later and the formal definitions of menswear came in a little less rigid, with men and women stepping into identical, dowdy trousers and bank teller-blue shirts. Elsewhere, models were sent out in ultra-cropped sweaters, formal board shorts, and beige acrylics, while the same bruised leather that had been crafted into boyish biker jackets at Prada had been pleated into girly, knee-length skirts and nimble bombers.

As a whole, the collection hacked at drab office attire (or was it Upper East Side private schoolers?) with its heather grey jumpers, biscuit-coloured trousers, and navy overcoats, sexed up through Miuccia’s inclusion of slashed, Christina Aguilera Dirrty era-esque minis and matching belts slung around chests like an 00s glamour model. But while that might have been the most carnal depiction of sex, it wasn’t all thigh-slapping, body-baring mischief. Low slung librarian skirts, and shapeless, sensible chinos practically huffed with desire thanks to matronly hosiery which just happened to poke out from waist bands. It was Mrs Prada, after all, who said that “ugly is attractive, ugly is exciting”. In fact, this season’s Miu Miu offering chimed with many hardcore Prada-isms, subverting the haughty codes of the upper class by taking down and sending up their beloved uniform.

Click through the gallery above to see more of the collection and check out our round-up of Paris Fashion Week’s best in show here.