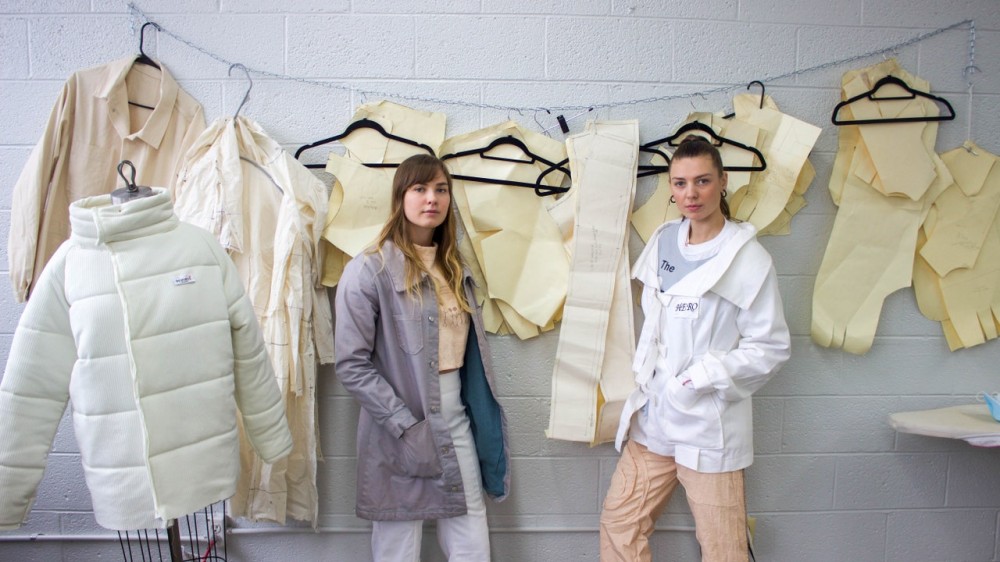 When it comes to major fashion capitals, you may think of New York, London, Milan, and Paris—but sisters Cassidy and Kelsey Tucker want to add Detroit to that list. With their genderless label, Deviate, the duo hope to foster a fashion community in their growing, native city. “The fashion industry in Detroit is really nascent and budding,” says Cassidy. “We’re a city that’s so overlooked, but there’s this crackling creative energy here. That narrative doesn’t really get shared with those living outside of the city.”

In many ways, Detroit is on the rebound. Despite suffering an economic downturn and filing for bankruptcy in 2013, becoming the largest city in American history to do so, the city is now seeing promising change. Start-ups are basing themselves there once again, public places are being fixed up, and cool shops and hip restaurants are cropping up, too. There’s also a number of budding fashion brands who are making Detroit their home base: Shinola, Détroit is the New Black, SMPLFD, and Deviate are all headquartered in the city.

The two siblings founded Deviate back in 2018, after stints outside the city to pursue their other career paths. Kelsey worked in L.A. for designers such as Vera Wang, while Cassidy studied business at Princeton (where she had a carpooling start-up acquired by Bosch). In 2018, however, they wanted to work together and saw an  opportunity to create something special back in Michigan. Their genderless streetwear label imbues jackets, hoodies, and sweats with a sleek, utilitarian feel. “I’ve always had more of a fluid style,” says Kelsey, who spearheads the design, while Cassidy handles more of the business side. “At first, I was designing for women, but then men would pick things off the rack, too. I realized, I don’t have to identify gender to a piece.”

The area certainly impacts the designs as well. This summer, for instance, they will be releasing a new collection of jackets that take cues from the no-fuss style of Detroit natives (particularly their father). “There’s no point in a garment if there’s no story or emotion,” says Kelsey. “Our dad is super blue collar, he sells cars, and growing up I would always take his jackets and wear them. Everyone wears Carhartt and denim jackets here, so we wanted to reinvent that, and make it high fashion.” Featuring quirky patchwork or strong shapes, their jackets are a best-seller. Take this spikey coat, for instance.

Everything is made in-house in their studio in Highlight Park, by a group of all-female artisans. “We started working with local designers, specifically recent graduates,” says Cassidy. “The pandemic actually really accelerated the development of our production team, because we had started producing PPE for healthcare workers.” Last year, the duo also began working with the nonprofit organization Boys and Girls Clubs to offer youth workshops in the city for anyone who is interested in the fashion industry. “Every Monday through Wednesday, we have youth members that come and work with us through a paid apprenticeship program,” says Cassidy, who adds they learn industry skills like pattern-making and marketing. “We want to cultivate and retain the talent here.”

As the brand continues to grow, the two sisters’s main hope is to spotlight the abundance of artists who are proud to be based in Detroit. They often collaborate with other creatives in the city through the Lost Artists Collective, including at a recent art gallery showing, in which a Deviate jacket was shown. “There’s a really eclectic mix here,” says Cassidy. “It’s this really interesting marriage of young professionals and creatives, and then people who’ve been here forever—but one thing that everyone shares is Detroit pride.” Cassidy also adds that many of the city’s creatives are ready to share what a Detroit perspective on style looks like, and to introduce that to a bigger audience as well. “You’ll hear a lot of things like, ‘Detroit’s coming back,’ but I think a lot of people feel like, ‘We’ve been here,’” says Cassidy. “We want people to come and see what we’ve done.”