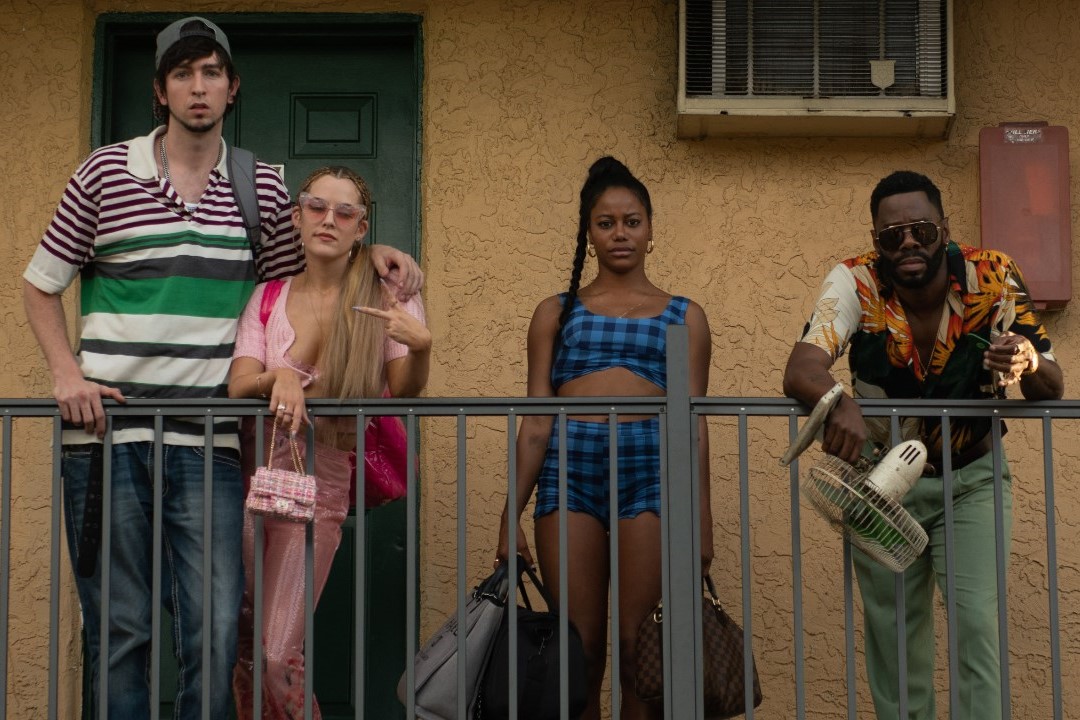 The chaotic movie’s costume designer reveals cult inspirations, why Zola wears blue gingham and red Nike Cortez, and the fashion easter eggs you should be looking out for

If you’ve seen the trailer for Janicza Bravo’s Zola – all hazy pink sunsets, stripper poles, and a sense of foreboding – you might not necessarily connect the dots that link it to 1939 classic The Wizard of Oz. But though the films’ protagonists end goals might be drastically different, with Zola on a quest to make a stack of cash, and Dorothy on a mission to get to the Emerald City, they’ve got more in common than you think.

Adapted from a hi-octane, internet-breaking 2015 Twitter thread by Bravo and renowned playwright Jeremy O. Harris, the movie tells the story of A’Ziah ‘Zola’ King (Taylour Paige) and her chance encounter with the enigmatic Stefani (Riley Keough). The two meet in a diner, bond over pole-dancing, and spend a night stripping together, before Stefani invites Zola to drive down to Tampa, Florida – accompanied by her boyfriend Derek (Nicholas Braun) and ‘roommate’ X (Colman Domingo) – where she assures her there’s big bucks to be made in the clubs. Soon, however, it becomes abundantly clear that Stefani is not all she seems, and what’s supposed to be an easy, breezy road trip descends into total chaos.

Costumed by Derica Cole Washington, the movie’s fashion makes subtle nods in the direction of The Wizard of Oz. “Zola’s main look – a blue gingham set – is a nod to her being our Dorothy,” Washington reveals over the phone from LA. “And the shoes she wears throughout, the Nike Cortez with the red swoosh, play into this idea of the ruby red slippers Dorothy herself wears.”

In stark contrast to the way Oz transitions from black-and-white to glorious technicolour, however, as Zola progresses, the palette goes from kaleidoscopic candy brights to something a whole lot darker. Stefani’s final look – an acrid chartreuse snakeskin bandeau and matching low-slung trousers by I.AM.GIA – reveals who she really is, as heroine Zola closes out the story in bronze sequins. “I wanted her to look like she was wearing armour,” Washington says.

From archive Dior bathing suits to cheap, matching dresses scored in Florida malls, Western-style fringed shirts to assless denim jeans care of Hardeman, Zola is a satisfying sartorial feast from start to finish. As the movie gets its debut in the US this week (and the rest of us hold on with bated breath, we caught up with Washington to discuss fashion easter eggs, her fave looks, and finding inspiration in cult movies including Clueless and Romy & Michele.

Hey Derica! So first of all, did you follow the Zola story as it happened? Or how did you become aware of ‘The Thotyssey’?

Derica Cole Washington: I’m not a big Twitter user, but I did follow the story when it came out. And then when it became an article for Rolling Stone, I was like ‘Oh, this is really picking up traction’. When I heard it was going to be made into a movie, I was surprised but it made sense. It’s kind of an unprecedented moment – a story that started on Twitter translated to the cinema screen. But the intrigue, the suspense was all there. It really captured our attention.

How did you get involved with the movie?

Derica Cole Washington: Through a cinematographer friend who’s also friends with Janicza – he was like ‘You have to meet her, she’s looking for costumes!’ I was already a big fan of her work so I was like ‘Oh my god, yes.’ So I put together my pitch deck – which is my favourite part of my job – and met up with her to go through my ideas and my vision for the movie. She was really interested from the off and the conversation just kept flowing – it was really an open exchange of our ideas and plans and thoughts. A full collaboration.

What did your research look like when you were thinking about the costumes? What was on your moodboard?

Derica Cole Washington: So the biggest thing is that Zola in itself, the Twitter story and the film, is in a sense a modern period piece that took place in the summer of 2015. So for the costumes, I really wanted to stick with what was very on trend, that kind of 2014–2015 headspace. In terms of reference points, I looked to 90s runway fashion, street style, and a bunch of photography books. But more specifically, our greater theme was that they’re all on this journey or this quest, in a similar way to the four main characters we see in The Wizard of Oz on their way to the Emerald City.

How does that translate to the costumes?

Derica Cole Washington: Well, there are a lot of pops of green in the story for a start, not just in the costumes but in the background, the way things are lit. Zola’s main look – the blue gingham set – is actually a nod to her being our Dorothy on this quest which is essentially to earn money, which is how Stefani lures her in, you know. She wears a lot of blue, in fact. It’s kind of a nod to the blue of the Twitter bird, where everything originated. And the shoes she’s wearing, the Nike Cortez with the red swoosh, plays into this idea of the ruby red slippers Dorothy herself wears.

I love that – so many kind of fashion easter eggs to look out for. What about Stefani’s looks, what were you trying to convey through them?

Derica Cole Washington: Her first look was a major part of my moodboard. It’s this vintage Dior set, like a bathing suit tucked into a skirt. You don’t see it so well because she’s sitting down in the diner where she first meets Zola. I wanted her decked out in designer, very glossy, very pink. Pink was really important in her palette, because it mirrors the very dreamy, almost cotton candy kind of static that punctuates the movie. I wanted Zola to see her as this embodiment of what she wanted – the designer clothes, the money, the access. But as the film goes on, we find out she’s really a sex worker, and things start going wrong, the palette becomes a lot darker across the whole cast. I love Stefani’s snakeskin look in act three, as everything falls away and we see her for who she really is.

“I wanted Zola to see Stefani as this embodiment of what she wanted – the designer clothes, the money, the access. But as the film goes on, and we find out she’s really a sex worker and things start going wrong, the palette becomes a lot darker across the whole cast. I love Stefani’s snakeskin look in act three, as everything falls away and we see her for who she really is” – Derica Cole Washington

Do you have a favourite look, or one that you really feel embodies a character?

Derica Cole Washington: There’s a moment before the group even leaves to go to Florida, that shows the relationship between Zola and Stefani building. We really needed to show them bonding as friends, and so Clueless and Romy & Michele’s High School Reunion were big reference points for us. So they’re going to the strip club, and they’re both in these slip dresses – not matching, but complementary. Zola’s in chartreuse, almost neon green, and Stefani has on this blue lace version. There’s also a moment when they match in plaid, which was a nod to a photo of the girls in real life. I love the red cowgirl-inspired shirt Zola wears in the diner, too. We didn’t have clearance to use Hooters shirts, which is where the real Zola worked, so we kind of decided to make the restaurant Western-themed. The looks turned out pretty iconic in their own way.

Where did you pull clothes from?

Derica Cole Washington: Mostly I worked with indie designers, and I made a lot of modifications. Some pieces were custom. The Dior set I got from a vintage dealer, the red work shirts I got from Fashion Brand Company, which is an amazing LA brand that I think is fantastic and so creative. Stefani’s snakeskin look was from I.AM.GIA, and the green and blue slip dresses were from a Florida mall and a custom piece. There’s a few pieces from Hardeman, including the denim look Stefani wears after she strips – the jeans with the but cut-out, which I love.

What did Taylour and Riley make of the costumes? They look great on screen but also like they’d be really fun to wear…

Derica Cole Washington: They loved the looks and we had a lot of fun with them, just playing to see what worked, what didn’t. One of the things we talked about was the practicality of what they were wearing in the film, which I don’t think a lot of people realise. So for example, Taylour was like ‘I can’t wear these shoes to strip, there’s too much glitter on them’, because when she was upside down on the pole, it was coming loose and getting in her eyes. And when they’re dancing their asses off, we needed looks that didn’t impede what they were doing on the pole. There was a lot to think about when it came to practicality, from the way the actors’ bodies move, right through to the actions they need to make.

People put a lot of emphasis on the runway informing trends, but less on the impact incredible costume design has on what we wear. You were yourself heavily inspired by Clueless and Romy & Michele – how does it feel to know Zola is likely to become the kind of cult film people are referencing 20 years from now?

Derica Cole Washington: It’s amazing. Thinking about the cultural impact it might have, I am thrilled. From our perspective, the way the actual story came from Twitter, and then became this movie, feels like a first. And Zola herself, in the six years since she told her story, is so steeped in culture today, like this iconic heroine figure. It all feels really special, and I’m so grateful and happy to be a part of it.

Okay so, if you were to costume a remake of a film right now, what would it be and why?

Derica Cole Washington: Oh totally Clueless! I mean I grew up on that film, it’s so iconic. I heard they’re coming out with a new version of it actually, so I’d love to reimagine it in a contemporary way. I think what makes that film is the costumes – the way they kind of disregard whatever practicality is realistic to create the world they want to. Think of the tennis scene with them all in black and white – it’s just so considered and thoughtful. Mona (May) did an incredible job, but I think it also comes with working with a filmmaker who has that thoughtfulness and who pushes you to take it further. For me that’s more important than the script when I’m considering a project. Does the director and the producer want to push boundaries to create something really special? If the answer is yes, I’m interested.