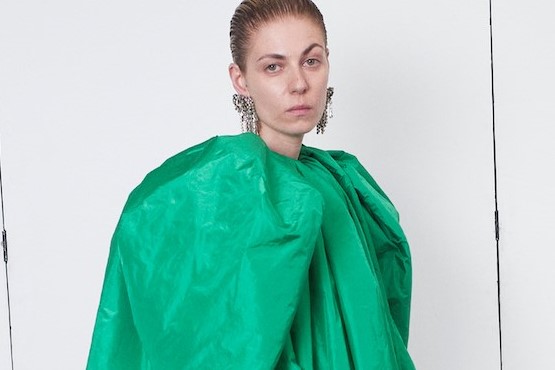 After Demna Gvasalia ditched Vetements way back in 2019 to focus on Balenciaga, and announced he’d be dropping the house’s first Haute Couture collection in 50 years last January, fashion has been waiting with bated breath for the moment they’d finally clap eyes on it. After a bit of a delay thanks to – surprise! – the coronavirus, today, that moment arrived. In the midst of a jam-packed return to IRL runway shows, the iconoclastic designer’s first elevated offering got its triumphant debut. Ticket lost in the mail? Here’s everything you need to know.

CRISTÓBAL’S SALON GOT AN UPGRADE

Demna’s usually a fan of doomy, high-drama tech and disconcerting apocalyptic backdrops when it comes to his ready-to-wear shows – case in point, his AW20 show, when flames blasted across the ceiling, models stomped down an almost pitch-black flooded catwalk, and it felt like the end of the world really was nigh. This time around, however, the subversive designer stripped things back with a more traditional salon setting. Taking place in Cristóbal’s original show space, which was revamped earlier this year, guests made their way across immaculate cream carpets to their dainty gold chairs, where red carnations – the late designer’s favourite flower and a signature motif of the house – lay waiting for them.

KANYE RETURNED TO THE FROW

As guests including Anna Wintour, and Bella Hadid filed in, one incognito but unmistakeably Kanye-shaped figure captured social media’s attention. Covering his head with a silk scarf to avoid recognition – how he actually saw the collection properly we have no idea – Kanye’s jig was basically immediately up given he’d chucked on a pair of YEEZY Foam Runners and what looked like a black version of his recently-revealed GAP puffer jacket to attend.

…and, like, doesn’t that make total sense? Having made her runway debut at Proenza Schouler for AW21, America’s second daughter followed it up with a pretty major Paris Fashion Week appearance courtesy of Demna. Blink-and-you’d-miss-her, the rising model made her way round the salon in a slick black floor-sweeping tux and a pouffy satin stole with her signature curly mullet slicked back off her face – though her jam jar glasses stayed perched firmly on her nose.

IT WAS A COMPLETELY SILENT SHOW

Demna might have recently launched a music series for the house – with Rammstein and RuPaul dropping in to curate their own eclectic playlists – but this show took place in dead silence. The only noise to be heard was the odd click of a camera, an audience member clearing their throat, and the models’ shoes padding across the carpet. The move harked back to ye olden days of Couture, during which details of each look would be narrated to the audience.

THERE WAS A FULL HOUSE OF DEMNA CLASSIQUES

Offbeat, twisted denim? Check. 90s-indebted sportswear? Check. Enormous outerwear that dwarfed the models wearing it? Check, check, check. Kicking off with a series of exquisitely tailored, languid suits with wide shoulders and even wider legs, floor-length tuxes, and hulking, oversized opera coats, soon after a series of looks incorporating stonewashed denim, hoodies, and Soviet era-inspired sportswear landed on the runway. While Demna’s unsurprisingly playful, tongue-in-cheek take on Couture didn’t feel like a total reinvention of his ready-to-wear wheel, the whole offering was undeniably extremely elevated through uber-luxe finishes, cut, and attention to detail. The atelier staff, so often unrecognised, really knocked it out of the park with this one, put it that way.

….BUT ALSO PLENTY OF LOOKS THAT PAID TRIBUTE TO THE HOUSE’S HISTORY

Alongside the baggy tracksuits and subversive tailored denim came a series of looks that paid more obvious homage to Cristóbal’s reign at the house. The nipped in, embroidered jackets with sharp, angular shoulders, slinky, restrictive pencil skirts, and glittering slip dresses many models wore were offset with wide-brimmed, lampshade-like millinery, updated for a new audience with futuristic mirror-like finishes, while the bug-like sunglasses that punctuated the offering were also indebted to historic styles. The show reached its climax with a series of monochromatic, candy-bright ensembles that saw robes and anoraks turned into ball gowns worthy of the Met Gala – the resulting looks perhaps most emblematic of Demna and Cristóbal’s meeting of minds.

THE SHOW CLOSED WITH A BRIDAL LOOK

As is standard when it comes to Couture shows, Demna sent his first Balenciaga bride down the runway. No, it wasn’t a white windbreaker or a bleached out denim look, but a surprisingly chic, floor-sweeping skirt and tunic set overlaid with an understated veil. Who knew?

Check out the gallery above.