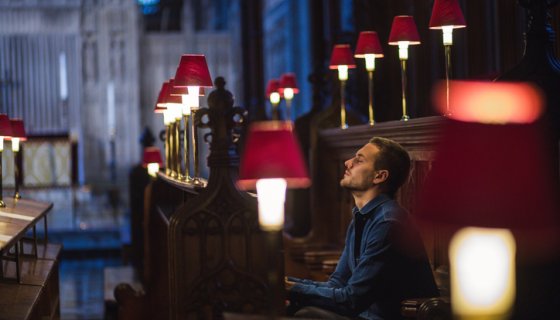 While the rest of the country has been practicing social distancing for the last month to avoid the spread of , one woman in Ohio tells reporters that she isn’t changing her plans or staying because she can’t get sick–due to being a Christian.

On Sunday (Apr 5), during an investigative piece on the virus, a churchgoer in Ohio told CNN that she is attending services during the because she is “covered in Jesus’ blood” and can’t be infected.

“I wouldn’t be anywhere else,” the woman told CNN’s Gary Tuchman from her car as she was leaving church services.

“Aren’t you worried you could impact other people if you get sick inside?” the CNN reporter asked.

When the reporter asked the insensible woman about the that don’t attend her church, the woman replied that she should be the one afraid.

“I go to the grocery store every day!” the woman exclaimed. “I’m in Walmart, Home Depot. Look at those people. They could get me sick!”

“But they’re not because I’m covered in his blood,” she added before driving off.

Ohio isn’t the only state that has continued to allow residents to continue to gather in large crowds in religious spaces, Florida also made headlines after a megachurch pastor was arrested after holding service and announcing that he also intended to continue church services despite government officials warning against the gathering of large groups. American Scientist Dr. Ho attributes the defiance to most religious groups being used to being reactive versus proactive.

“I think that the problem is that in many of the regions in the US are not proactive,” Dr. Ho said. “They are only reactive when problems appear. Their attitude is that this is someone else’s problem, yet the virus spares no one.”

American scientist Dr. David Ho: “I think that the problem is that in many of the regions in the US are not proactive. They are only reactive when problems appear. Their attitude is that this is someone else’s problem, yet the virus spares no one.” pic.twitter.com/5SOynBpvjw

Check out the insane video below.

Missouri is one of those states that exempt church services from its stay-at-home order. This is a mistake. pic.twitter.com/PAU8zwJ980