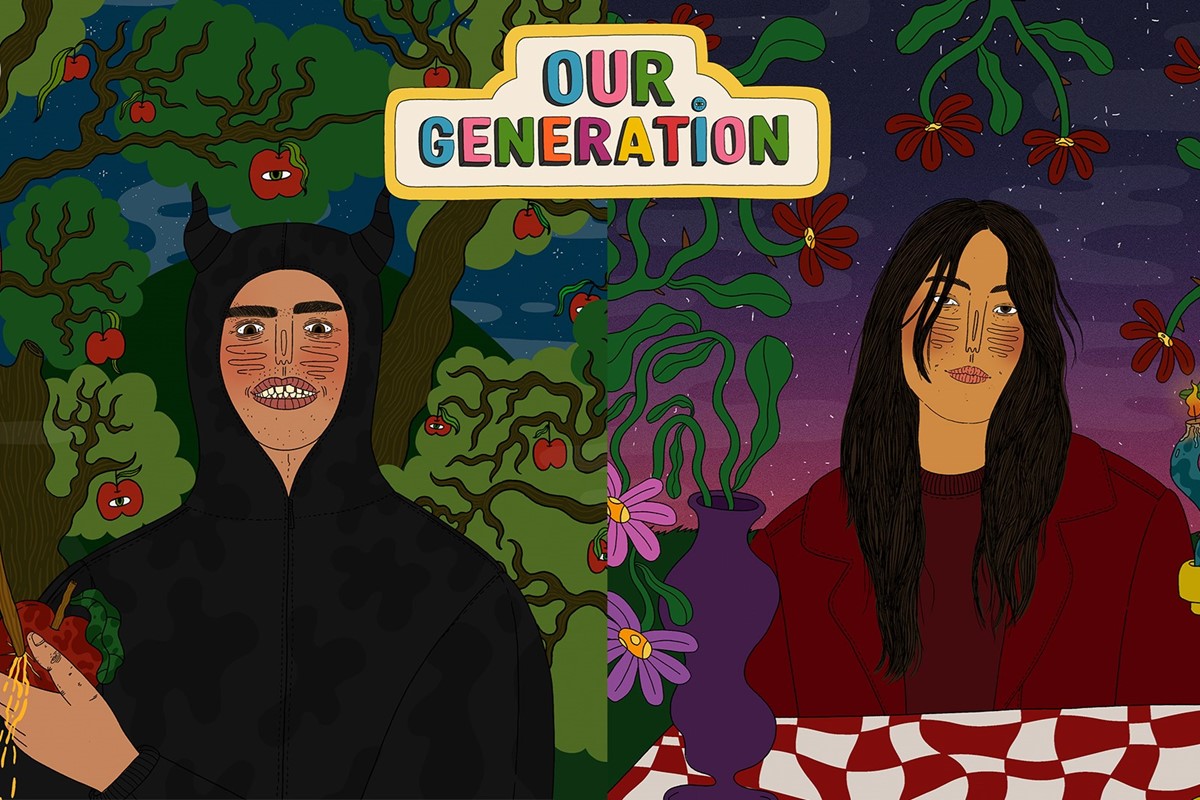 As part of Dazed’s partnership with Spotify’s Our Generation playlist, Spotify have invited slowthai, Bakar, and Arlo Parks to introduce us to their favourite upcoming artists. In our first piece, slowthai selects Deb Never.

Deb Never has found a place on the margins of pop music. “Sorry” could easily be Pavement or the Cocteaus until a flood of couplets steer it closer to a stoned Madlib. Almost dream-pop, almost cloud rap, almost shoegaze, none of the above, her 2020 EP Intermission arrived as debates around the future of genre revved up online. New tags like ‘hyperpop’ were understood more by mood than any specific sound, and gaming festival Lavapalooza threw a lifeline for live music as bricks and mortar spaces remained shut.

Earlier this year, the LA songwriter appeared on slowthai’s second LP, TYRON. Push treds an introspective line through the Northhampton rapper’s acerbic bars and Never’s celestial melody – almost indie, almost drill, none of the above. Like Never, slowthai is interested in addressing the strange realities of creativity today and the impact the internet is having on mass culture as it re-emerges from stasis.

In the latest installment of our Head To Head series, the pair reunite to forget classifications and double down on the topics that define the generation: what it means to have a platform, post-covid partying, and getting high online.

LD (67): the UK drill figurehead speaks from prisonFrom his music to his manner, LD embodies the endless complexities of what drill has come to be – as his LP Who’s Watching drops, the drill godfather addresses his relationship with the police, his past, and the contemporary scene

Do you feel that there is a responsibility for bigger artists to bring the next generation through?

slowthai: I don’t believe it is everyone’s duty because music is a form of expression. But I think, as an up and coming artist, you could ask bigger artists how they believe it’s attainable, but most of the time you are going to get the same answer and it is going to be perseverance. This isn’t to say that it works for each person, because we’re in the internet age where people go viral off stupid shit that helps get their music bigger. How it works for one artist, it might not work for the next. It’s based on your demographics.

Deb Never:  I agree. I’m not saying it isn’t our responsibility to set an example, but we aren’t running for president. It’s just about being yourself and true to who you are. There are going to be people who relate to you.

slowthai: I think as well. If you are a bigger artist with a bigger platform, it’s not your responsibility (to bring the next generation through). But if someone is doing their thing, and you fuck with it, then you push it on because you fuck with it. Things just natural happen ain’t it?

Deb Never: Exactly, what if you are in a lyric and you said, “Set the house on fire.”?  I don’t want you to go light a house on fire.  It’s like, tough; it’s tricky.  It’s like leading by example by who you are as a person and being able to express that artistically.

“If you put all your energy into something, someone is going to connect…they might feel the same way, they might feel a different way, but they relate” – slowthai

Can you pinpoint any moments in your career when you felt that love?  Is there a moment where another artist has shown you appreciation?

Deb Never: Definitely in the beginning and even now, there’s definitely you.

slowthai:  Yeah, but you had Brockhampton too.

Deb Never: Dominic Fike even showed me love by having me come on his first tour. It was a huge deal. I didn’t even have the EP out yet. Before I got to even sink my teeth in, I got shown that love and that helped me a lot to grow and that confidence.

slowthai: Brockhampton showed me love; Skep (Skepta) has shown me love; Mura Masa, he definitely gave me time; And King Krule! That was the first co-sign I had. I had this song called “Jiggle” and he personally posted on his Facebook, which I didn’t even know at the time. Someone sent it to me and it was the first bit of love I had. I remember my song was like 100K or something and I was like, ‘Oh my God’.

How does it feel when personal stories you both write about connect with fans?

Deb Never: When I first started making music, I never consciously went into writing with the intent of telling people ‘this is a story’. Some people are narrative-driven, but for me, I could be saying I’m eating an apple today, but saying that in a way that makes you feel something more. It wasn’t until recently that I started thinking about perspective. Even if I am writing about a feeling, it needs to take into account the inner perspective.

slowthai: That “Stone Cold” song, when you released that, I was like ‘fucking hell’ because I felt that it was the song for me. I related to it.

Deb Never: That’s basically how I feel about your music. Every time I hear anyone of your songs, it’s inspiring because I feel you come at it in a very metaphorical way.  It’s like you say random words. For some reason, it makes sense. I don’t know how to explain it. The way you piece it together is interesting.

slowthai: Bro, unless you are a mathematician and it’s all on the whiteboard, you write how you feel. And it’s weird that maybe it’s something that happened to you 10 years ago, but you don’t go into it saying you’re going to take that moment and put it into song. The song just comes from your experiences.

Deb Never: It’s hard to write because you kind of constrict yourself. Do you know what I mean? You go at it like a wash of pure feelings and it is like piecing (it) together and making sense. Writing about the specific experience and honing in on it will block you off.

slowthai: If you put all your energy into something, someone is going to connect. It might not be for everybody but you know what I mean. You don’t write it on the intentional, you just write. They might agree, they might feel the same way, they may feel a completely different way, but they relate.

Deb Never:  If you’re trying to influence people, or you’re trying to get a message across, you can’t put one thing on a platform and be the opposite personality-wise. You’ve got to wholeheartedly (believe in your message) as an artist if you’re preaching it.

slowthai: With the internet, we allow no room for a person to grow, and yet, that’s the beauty of having so much access to people‘s lives. They should grow and change. Tomorrow you might wanna start fucking riding a unicycle. I’m not gonna be like, ‘you can’t do that’. We have to stop being so judgemental.  We group too many people into stereotypes of what they are and are not allowed to be. It’s just like we were saying about writing a song. If you think about one thing, you’re missing so many other things.

Deb Never: I feel like on the platform, your artistry is set, like people can see you as one way and you’re in a box. And then in person you’re very soft-spoken, very sweet, very chilled; it’s that duality that can make people like, ‘Is what he is preaching real?’ But (we must) allow people to grow and show diversity. We might present ourselves as one thing on the platform. It doesn’t mean that’s fake.

slowthai: I watched that Billie Eilish documentary. Someone comes in to take a picture and she’s like, ‘I don’t wanna do this’.  And  they’re like, ‘We’ve got to do it because you’re a celebrity’. She is a human being!

“I don’t ever think guitars ever went away, they just meshed.It’s like any type of genre, now we’re just meshing and creating new music“ – Deb Never

Deb, your music has ignited a lot of talk about the return of grunge and guitar music.

Deb Never: I don’t ever think guitars ever went away, they just meshed. It’s like any type of genre, now we’re just meshing and creating new music.

slowthai: I think in the 90s, with Blur, Radiohead, Oasis, these bands were prominent and dominant. They would be the ones charting. Hip-hop was considered urban music, which was alternative. I think the spotlight is definitely towards hip-hop at this moment in time. Do I believe (guitar music) is totally erased? I don’t think so. There are people making hits. They are making sick music.

Deb Never: I think there will be a balance of things but it’s definitely a combination of hip-hop and rock now.

slowthai: It was like when Jay Z ended the war when he joined Glastonbury, and Noel Gallagher was like, “They’ll never play. Why the fuck are they the headline.” And he (Jay Z) came out playing “Wonderwall”. Do you feel stuck that you have to be one thing?

Deb Never: Now we can explore.  You do what you like. It’s fun for me to challenge myself to make new types of music.

Deb Never: I would love to be there in London. I wanna say I wanna be at the show, or playing in the show, but if that wasn’t the case, I wanna be with all my friends throwing a crazy party, just letting it all out. Party like it’s the 1920s.

slowthai: Just linking up and being able to get fucked with friends. Having the freedom to be in LA or go to Thailand.