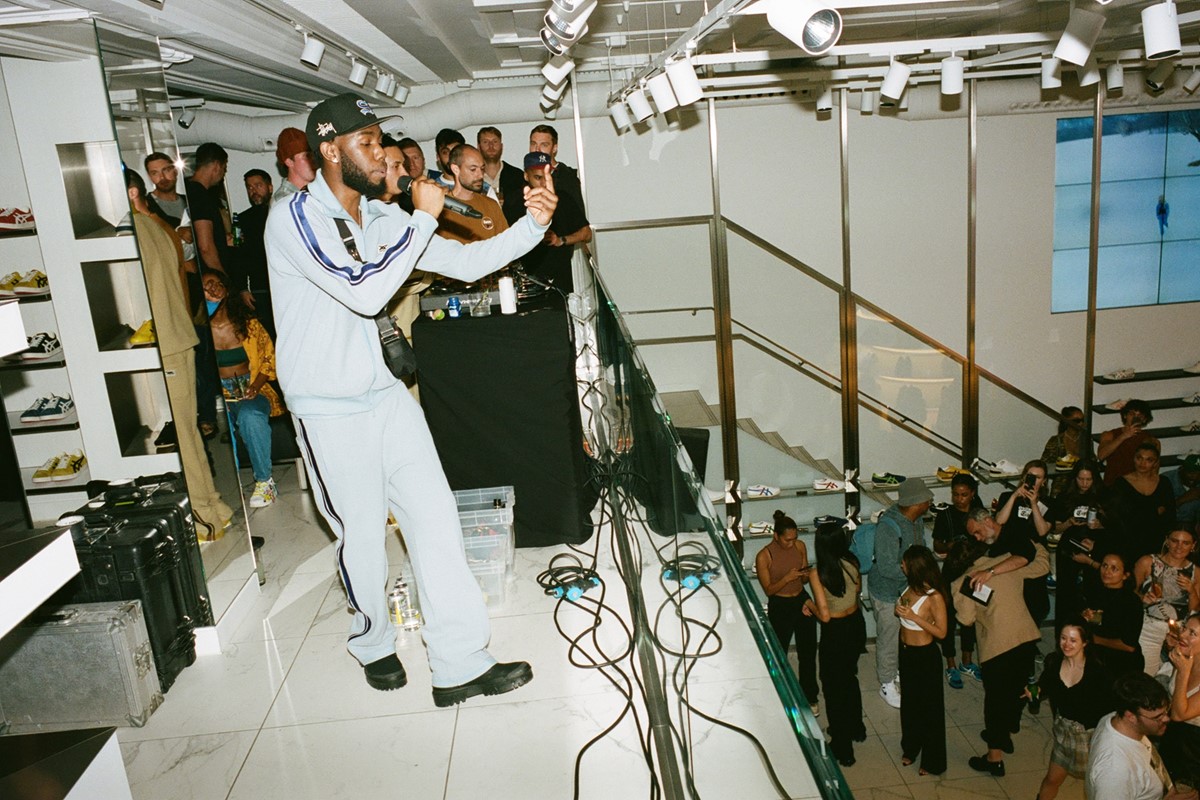 As waiters popped out from behind inconspicuous clothing rails and racks of futuristic looking shoes – dressed all in black and passing round enormous platters of bitesize sushi rolls and bougie cocktails  – it suddenly became apparent that fashion month had, actually, officially, made its IRL return.

The day’s sunlight quickly vanished and queues grew outside Onitsuka Tiger’s flagship store, the night laying itself out over Regent Street like it was harbouring a drunk, dirty secret.

The Japanese fashion brand – which creates sports-inspired fashion centred on comfort and innovation – was celebrating the opening of its largest ever store, designed to resemble a brand art gallery. The store – which covers two floors and spans 9,300 square feet – will also feature a showroom and gallery space in the basement, which will be used to support local creators and global artists, and to curate experiences that bring Japanese and London culture together.

After 30 years in the game, Dazed was not only marking a major fashion week comeback but its own three-decade birthday. Guests bundled inside (like walking advertisements for Bottega Veneta, Charles Jeffrey, Martine Rose, and KNWLS), with copies of the magazine’s Rihanna-covered anniversary issue tucked under their arms.

For everything else that went down – including our Art Director’s controversial party tips, all the familiar faces that made an appearance, and the best in soirée goss – take a scroll below.

Teaming up with Onitsuka Tiger to anoint the post-rona party season, Dazed clapped hands on the Japanese fashion label’s central London store, playing host to a flurry of friends and musical talent. The – thankfully – open bar was manned by CÎROC, who procured a sweep of ginger and grapefruit cocktails for the evening’s festivities. Meanwhile, cult Dalston restaurant Brilliant Corners served up vegan sushi for all the guests’ culinary pleasures. As party-goers meandered through mirrored enclaves and beneath Onituka Tiger’s floor-to-ceiling screens, emerging artist Slawn created one-off installations, which backdropped the evening’s hideaways and dancefloor.

LONDON’S PARTY PEOPLE ALL SHOWED UP

From Princess Julia, Miss Jason, and Leo Mandella, to Lily Bling and Maxim Magnus, the capital’s prosecco-swilling “no sleep, bus, club, another club, another club, another club” regulars finally found the oomph (after an 18 month hiatus) to sway back into the light like moths to a free bar. Though stylist Bling made a fair effort in Neapolitan mink and silk Versace pants, it was Princess Julia who enraptured the crowd, looking as though she had run full throttle through a haberdashery. A multi-layered, tulle scarf-skirt hung on her hips, while she had fastened a pair of satin bloomers into a babushka-style bonnet over her head.

THE BOOZE WAS BUOYED BY DJs

Though a couple of chitter-chattering jaws could have been enough to soundtrack the evening’s jollities, Jordss, Tommy Gold, and P-rallel stepped up to the decks, wearing looks from Onitsuka Tiger’s AW21 collection and delivering a slew of much-missed, tinnitus-inducing, booming sets. Then came up-and-coming rapper Sainté, who took to the venue’s mezzanine to perform live in front of a crush of guests. While everyone else in attendance slinked off past the bar and around the bend of the store for two years’ worth of catch-ups, the lights turned low on the mainstage and the night became club-infused and that bit more moody. Or we mean, that could have been the chilli vodkas that were doing the rounds.

IT KICKED OFF LONDON’S FASHION WEEK

Though Kiko Kostadinov technically inaugurated the return of in-person shows at London Fashion Week, post-9pm on a Thursday, people were only interested in the parties. And, as could have been predicted, London’s comeback celebration embodied all the camaraderie that was displayed in New York one week prior. Sure, the event could have been held over Zoom – it could have even been a “pub” quiz – but how else can gossip disseminate amongst friends?

Besides, the glamour of couples piling out of toilet cubicles while a snaking queue huffs and puffs behind can never, quite, be replicated on-screen. Always innovating, however, was Dazed’s Art Director, Gareth Wrighton, who came up with the ingenious idea of simply taking one’s business outside. Make of that what you will. Thank god for young creatives!