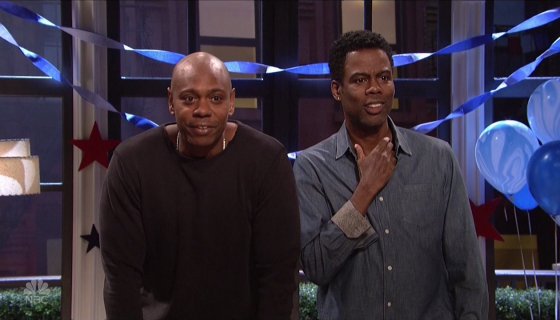 Somewhere out there a small group of lucky people witnessed one of the greatest shows on earth.

Yesterday (July 29), took to his Instagram page to reveal that he joined for his Dave Chappelle & Friends: A Talk With Punchlines, and blessed 100 socially distant audience members with a comedy set for the ages. And if that wasn’t an amazing enough duo for the night, Rock eventually FaceTimed Jim Carrey into the set much to the delight of the crowd in Ohio.

So I went to Ohio and did a Covid tested show with Dave and Jim Carrey on FaceTime .Crazy year indeed. Jim closed the show. It’s been a horrible year but this was definitely a bright spot.

The invite-only show on tour has been kept as secretive as the Illuminati thus far. But Rock’s IG post finally shed a little light on how incredible it must be to be in the audience to watch these two comic legends share the same space at the same time. Unfortunately, the content of their material remains under seal but we’re sure it’s not only socially relevant but funny as f*ck.

Another IG post showed Rock and Chappelle on the horn with Carrey and with that we can only wait and hope this stand-up show ends up on Netflix for the whole world to enjoy.

Lord we hope this ends up on cable or a streaming service or something!